This week my group did a quick pick-up game of Desperado. Desperado is a very simple very fast shoot-out game with usually very high body counts. We had six players who each ran two characters and I GMed and ran the occasional by-stander. One player was the town sheriff and his deputy while another ran a pair of criminals. The other players could choose which side of the law they were on. Here's the town, Skinned Ass Gulch, Arizona Territory: 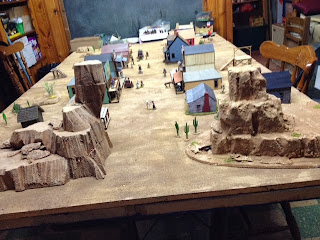 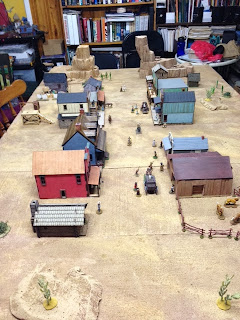 Most of the buildings are from Game Craft Miniatures but with a few of the beautiful 4Ground Wild West series. The Sheriff's Office: 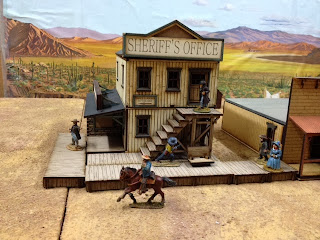 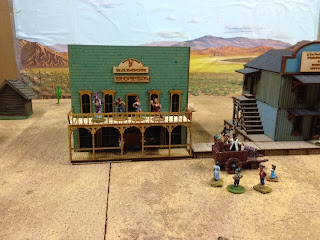 The trouble started when a couple of bandits tried to steal some horse: 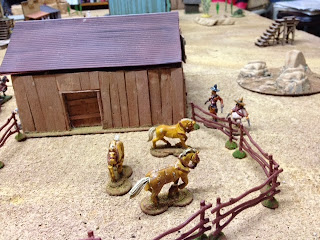 This led to a more general shoot-out when the Madame at the saloon, who was in cahoots with the bandits opened fire on the deputy. After a hail of bullets, one of the bandits escaped with a horse and the Madame was shot-up but rescued by her girls, although she still had 1 hit point left, out of 100. 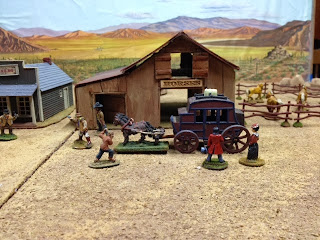 At this point, the stage began to leave town, loaded with a shipment of silver from the local mine. The sheriff decided that he needed a better retirement plan so he and his deputy seized the stage and tried to run it out of town. The local post master/lawyer tried to stop them and was killed for his trouble. A recently arrived couple of newlyweds decided to take ove law enforcement for the town and tried to stop the former sheriff. It ended badly for everyone involved. The couple and the original deputy were killed outright, along with an outrider who had joined the attempted theft. The sheriff ended up shot in the groin and bleeding out without a chance for recovery. The stage was ultimately taken by the original horse-thief who had ensconced himself on the bluffs to the west of town from where he watched the entire episode, occasionally putting in some rather ineffectual pot-shots.
Posted by bogdanwaz at 5:52 AM