Pride and Prejudice and Zombies Playtest 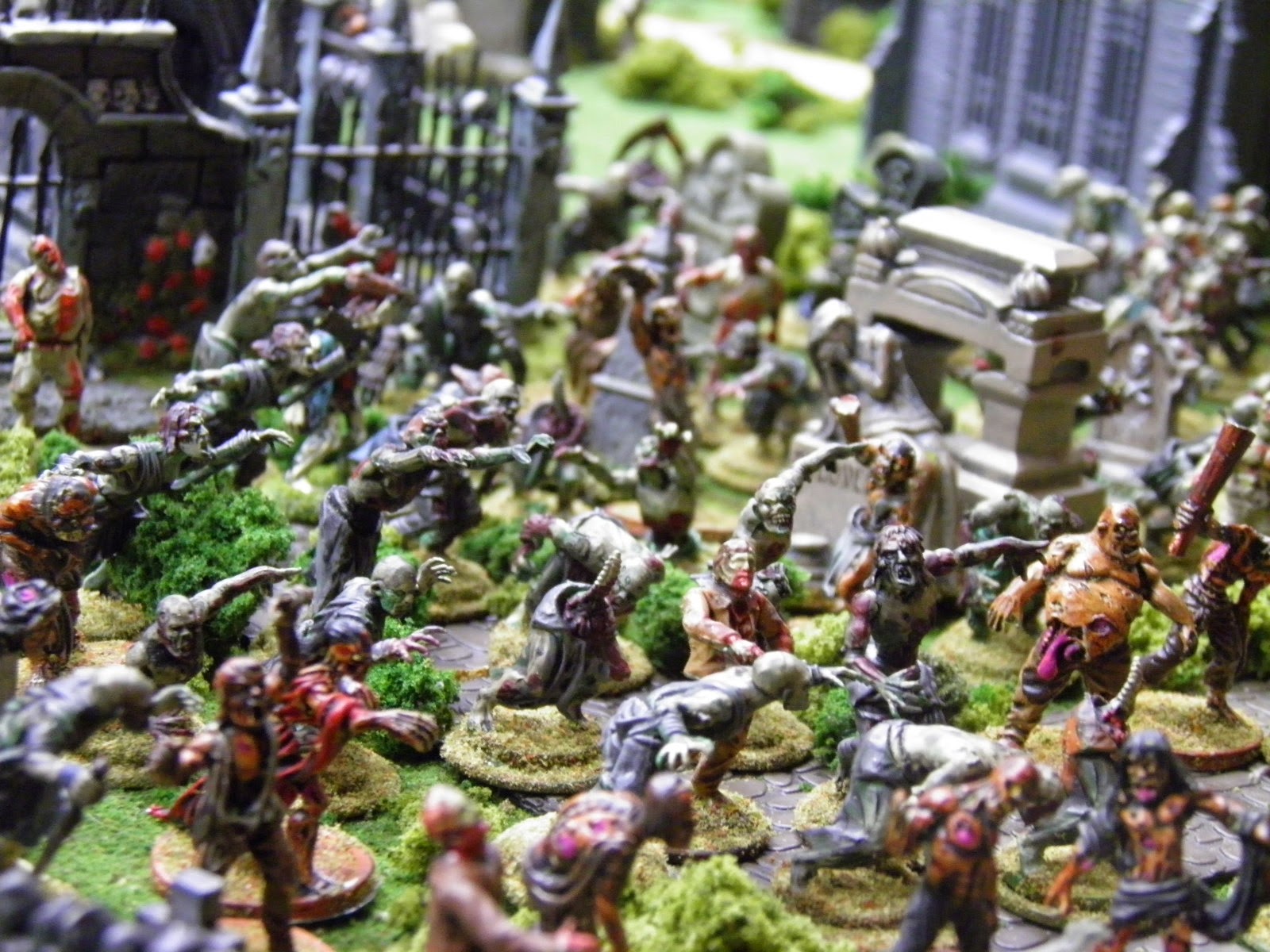 As mentioned previously, I am preparing for Cold Wars next week where I will be running the Pride and Prejudice and Zombies game.  In addition to the characters from the novel, it will also include characters from the Aubrey-Maturin books as well as the Sharp series.  A couple of weeks ago, we did a play test with my regular gaming group and it seemed to go pretty well.

As in the novel, the focus of the game is on the romantic travails of the Sisters Bennett with the zombie apocalypse as a mere stumbling block in their pursuit of appropriate husbands. 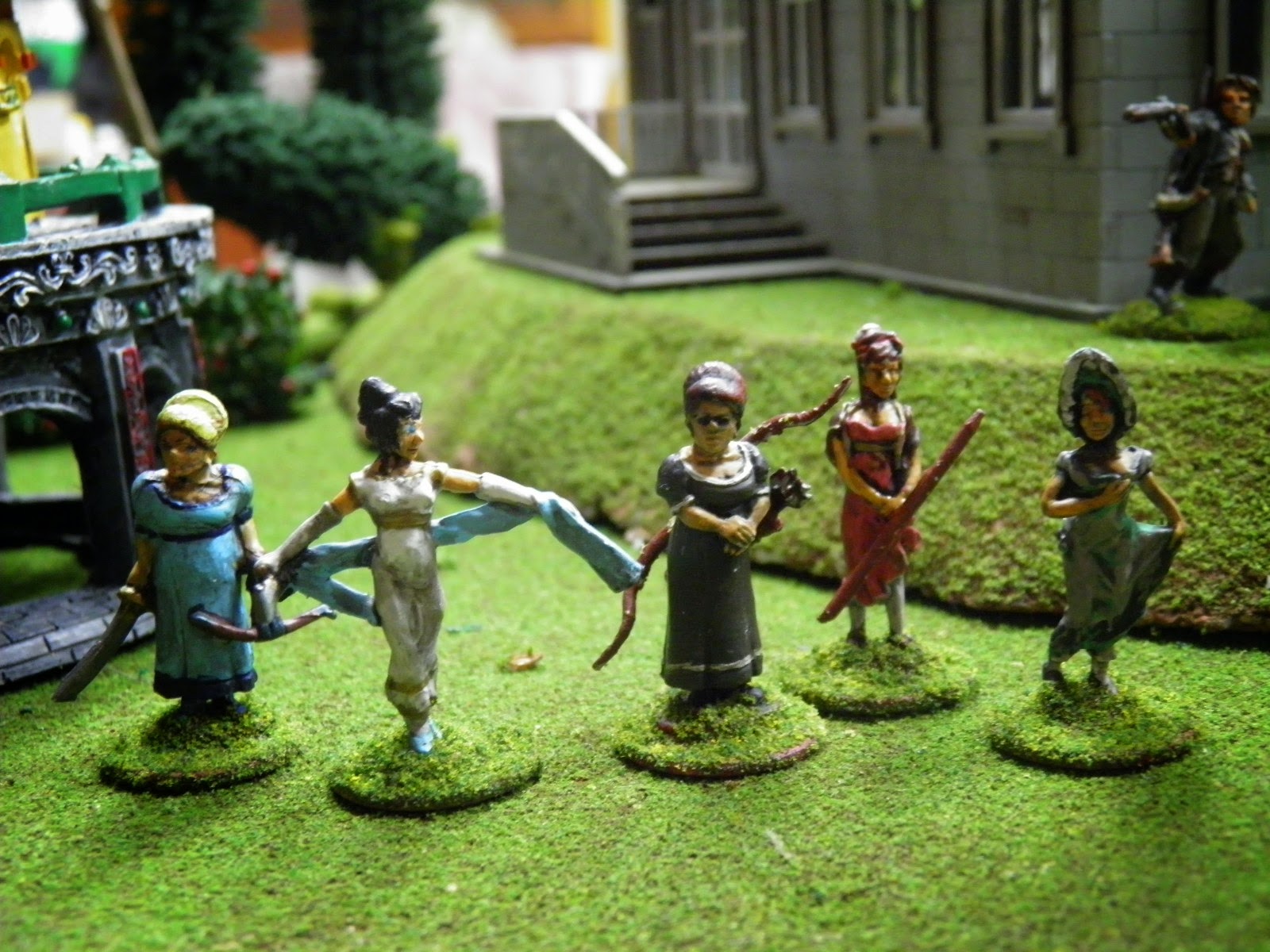 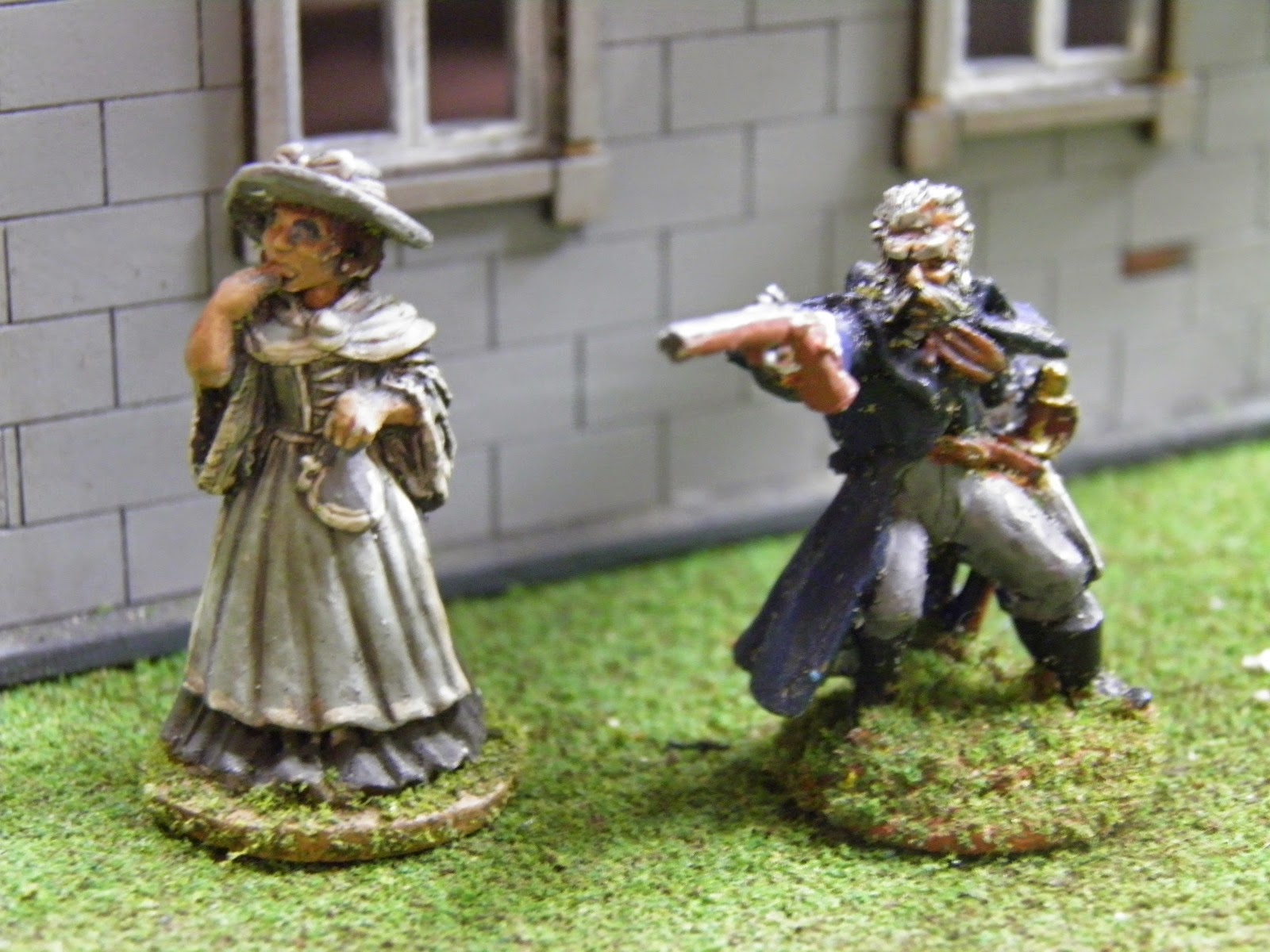 The main plot involved the attempted seduction of the youngest sister, Lydia by the scoundrel Mr. Wickham.  Lydia has "eloped" with Wickham, thinking they will marry when in reality, Wickham has much less honorable intentions.  The rest of the zombie-fighting sisters led by the Elizabeth are in pursuit, aided by the wealthy but proud Mr. Darcy who hopes to win Elizabeth's heart.

In the meantime, Britain's military heroes have been recalled to battle England's Strange Plague. 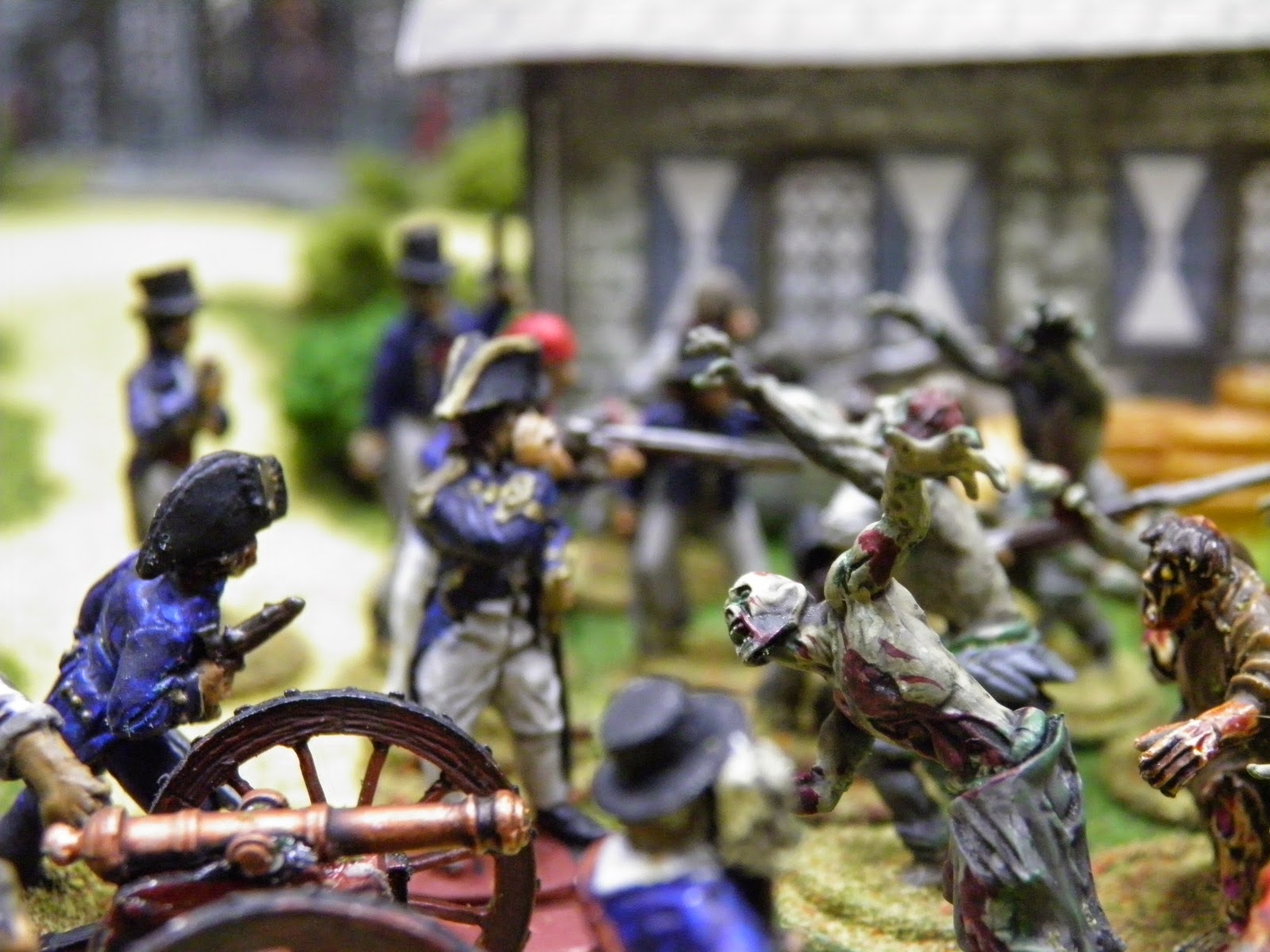 The crew of the HMS Surprise is hard-pressed 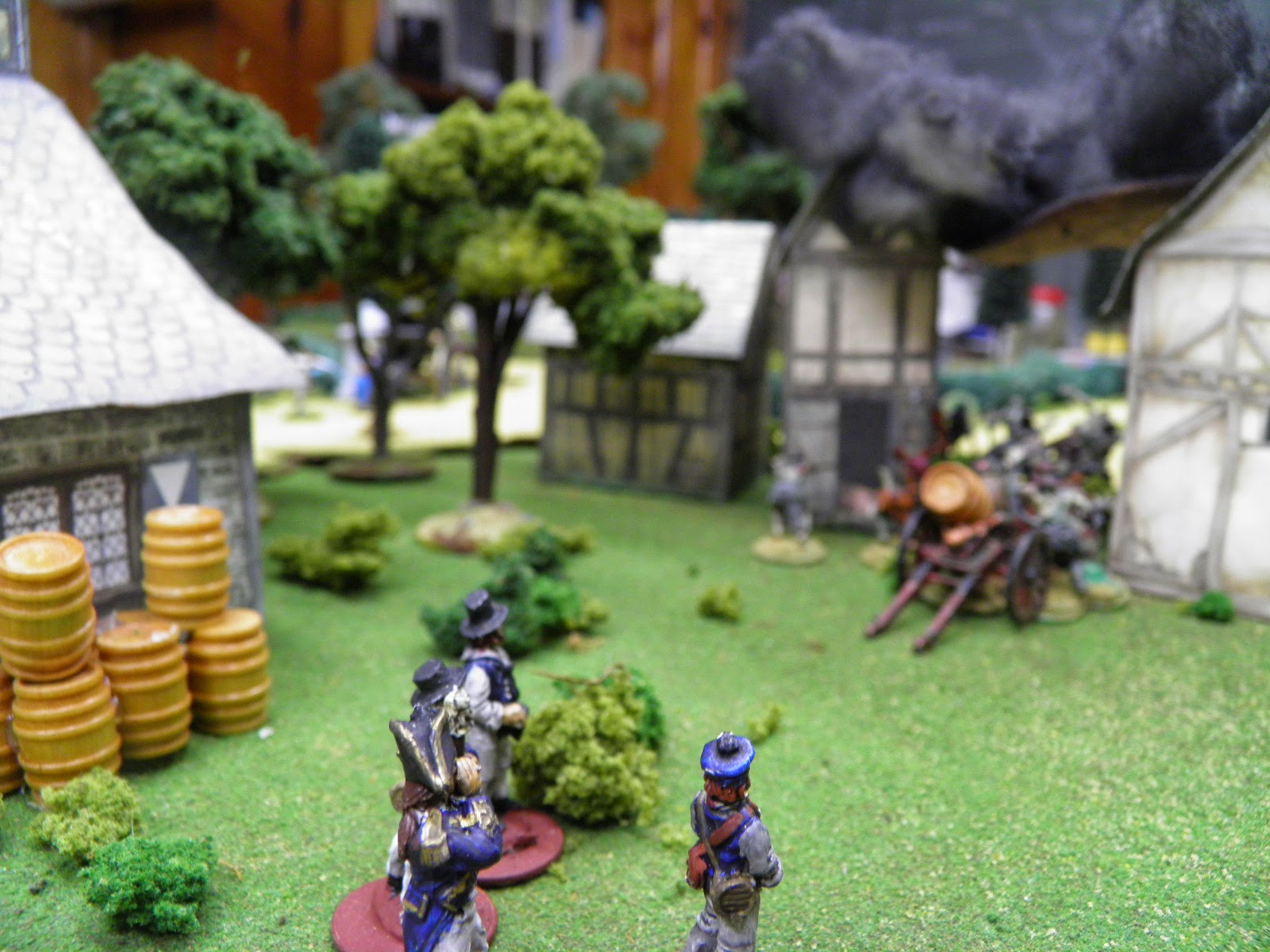 That is until they lure the zombies into the path of the Army's rockets and their own powder cart. 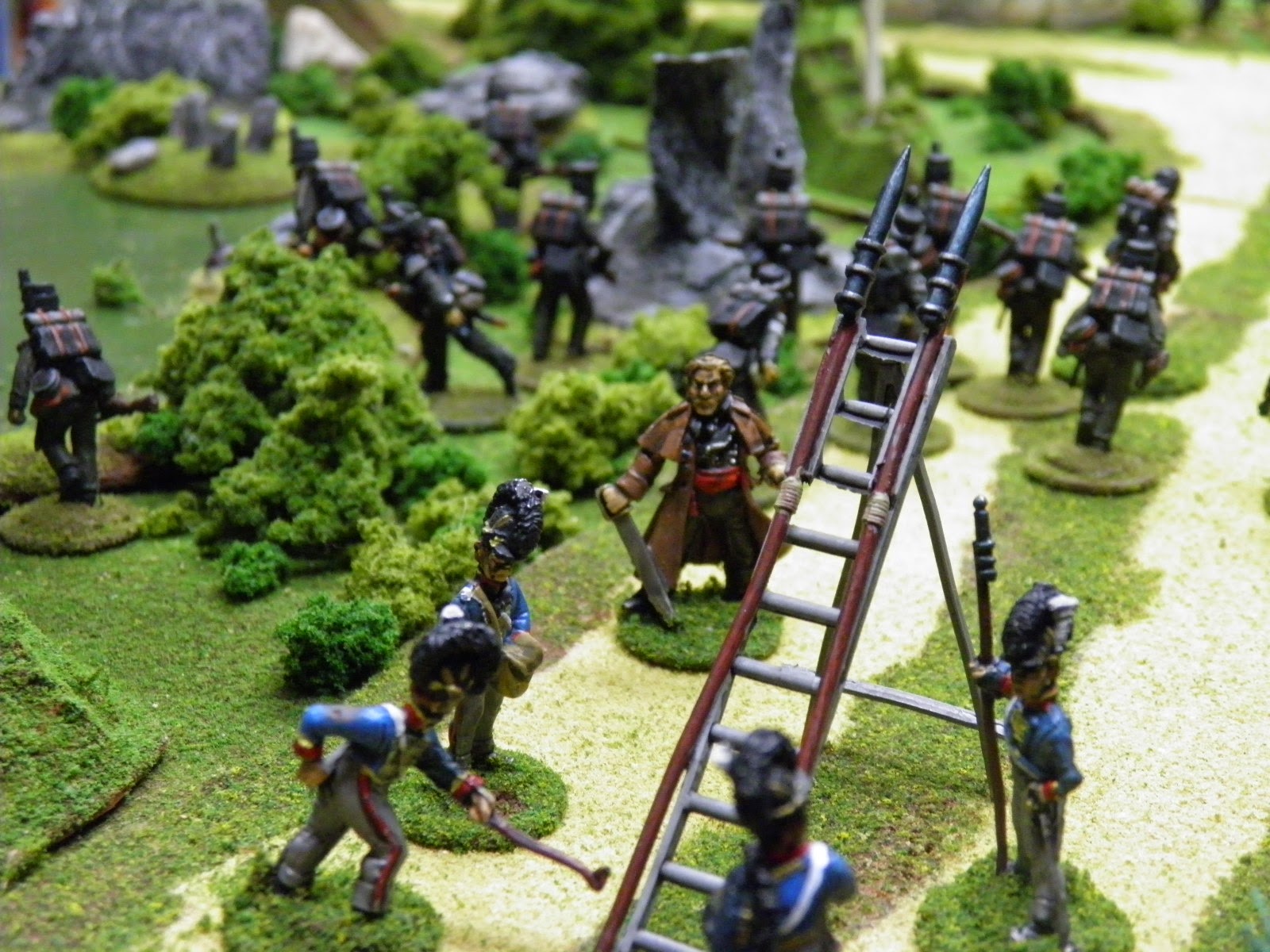 Sharp dug in and let the rockets do his fighting.  They proved surprisingly accurate.


In the meantime, the Bennett hoped to use an acquaintance, Mr. Collins, a parson, to marry Lydia and Wickham, once they were apprehended. 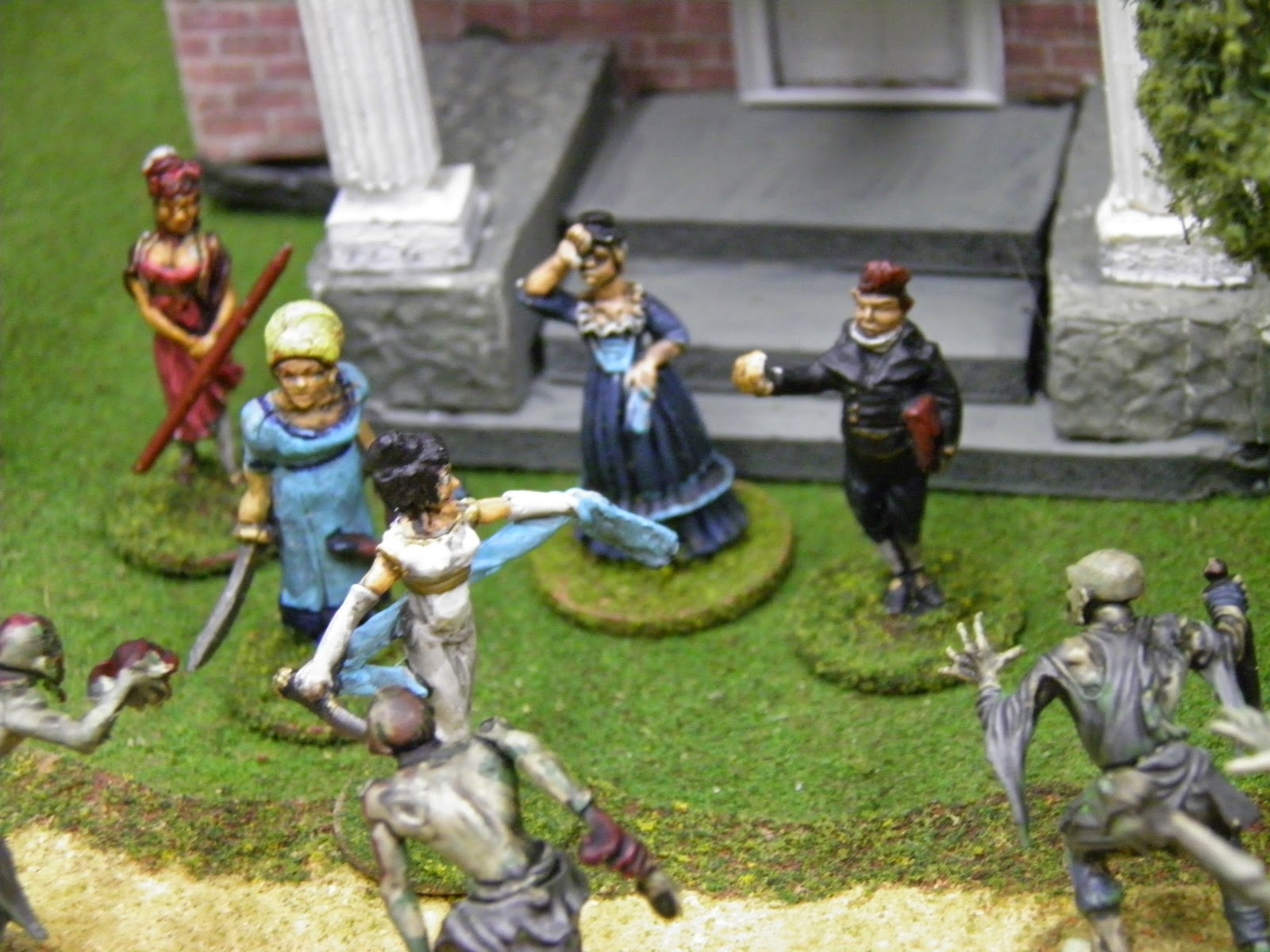 The parson's wife is not looking too well. 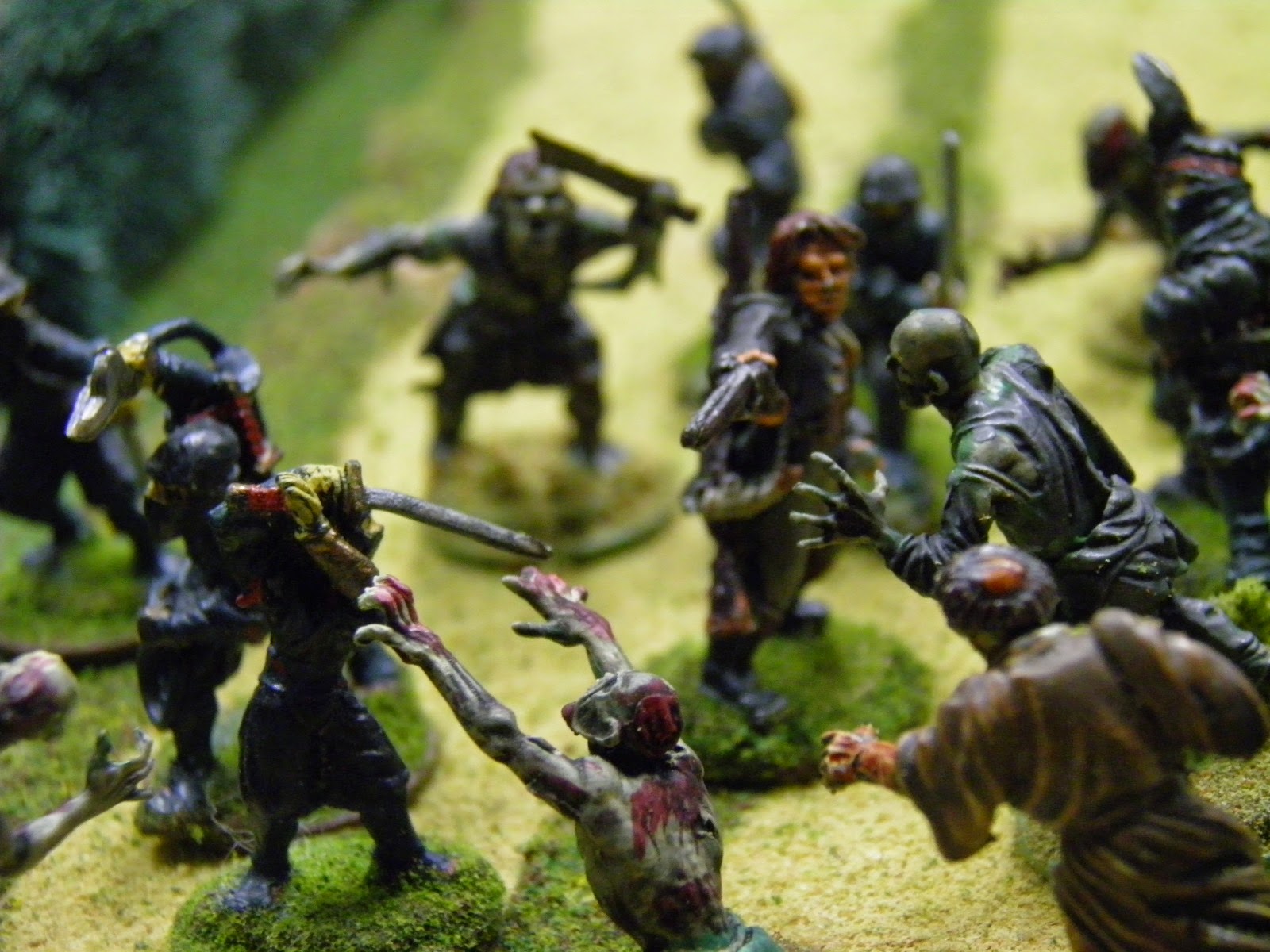 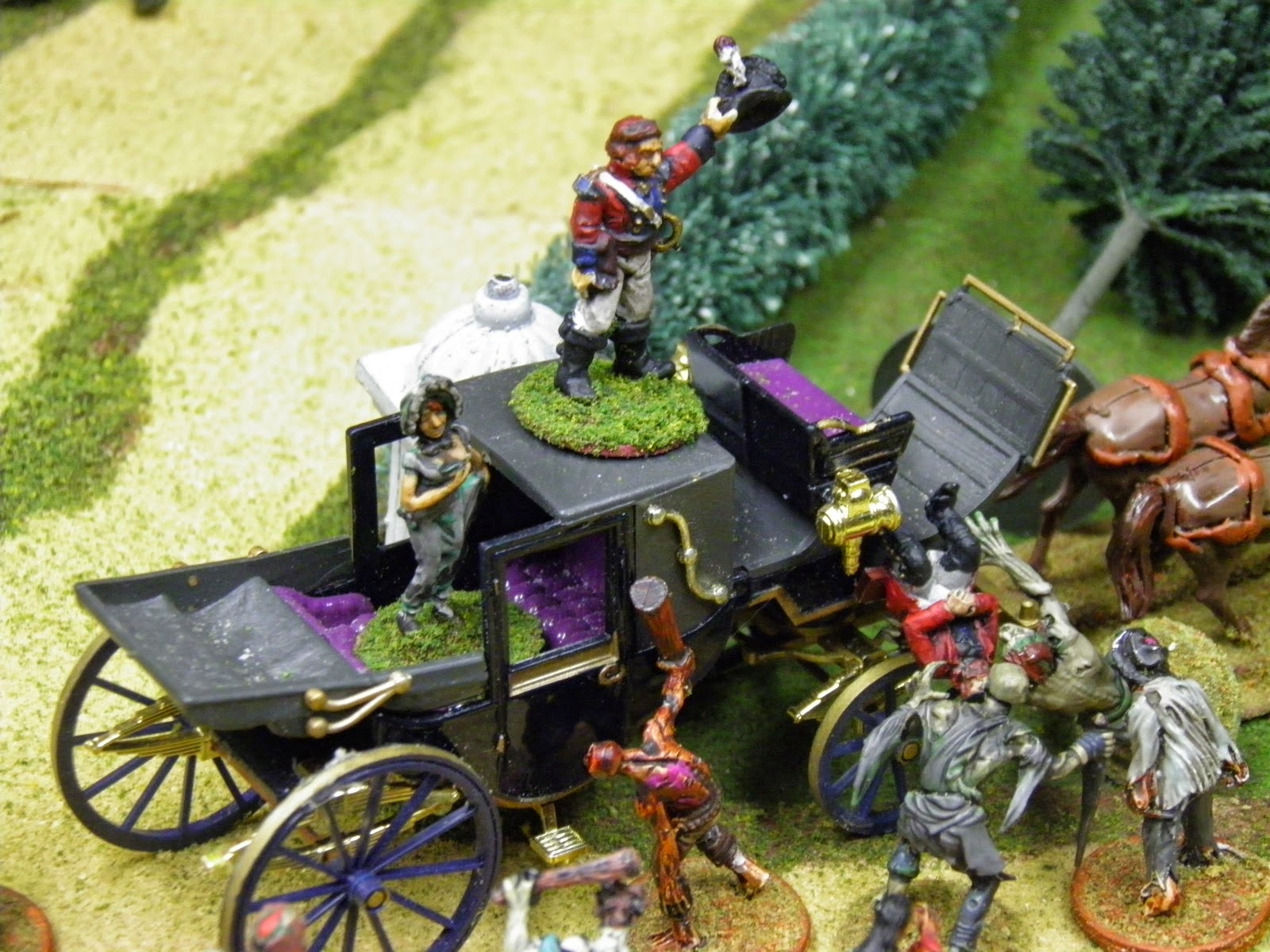 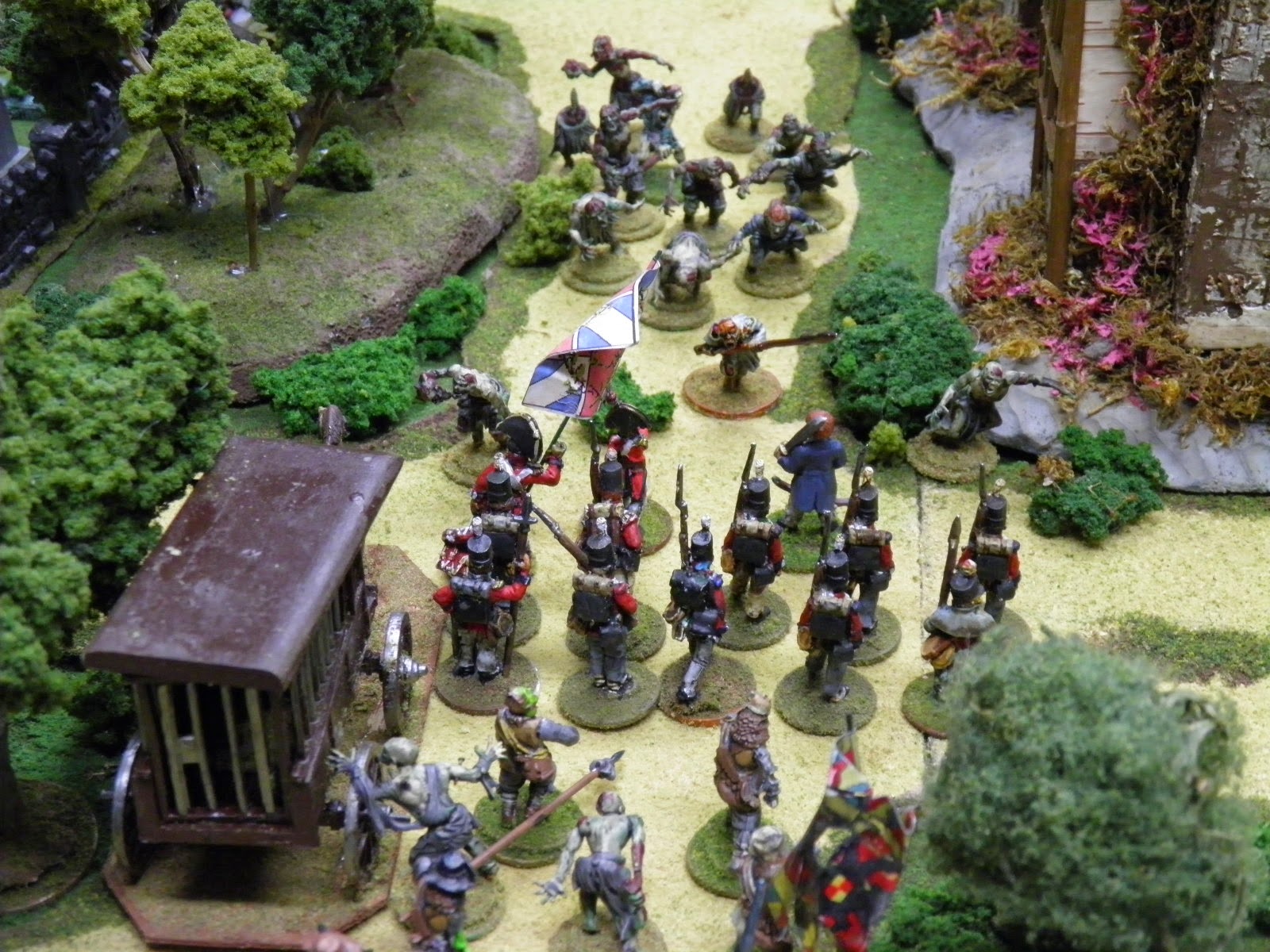 The militia find themselves in an awkward position. 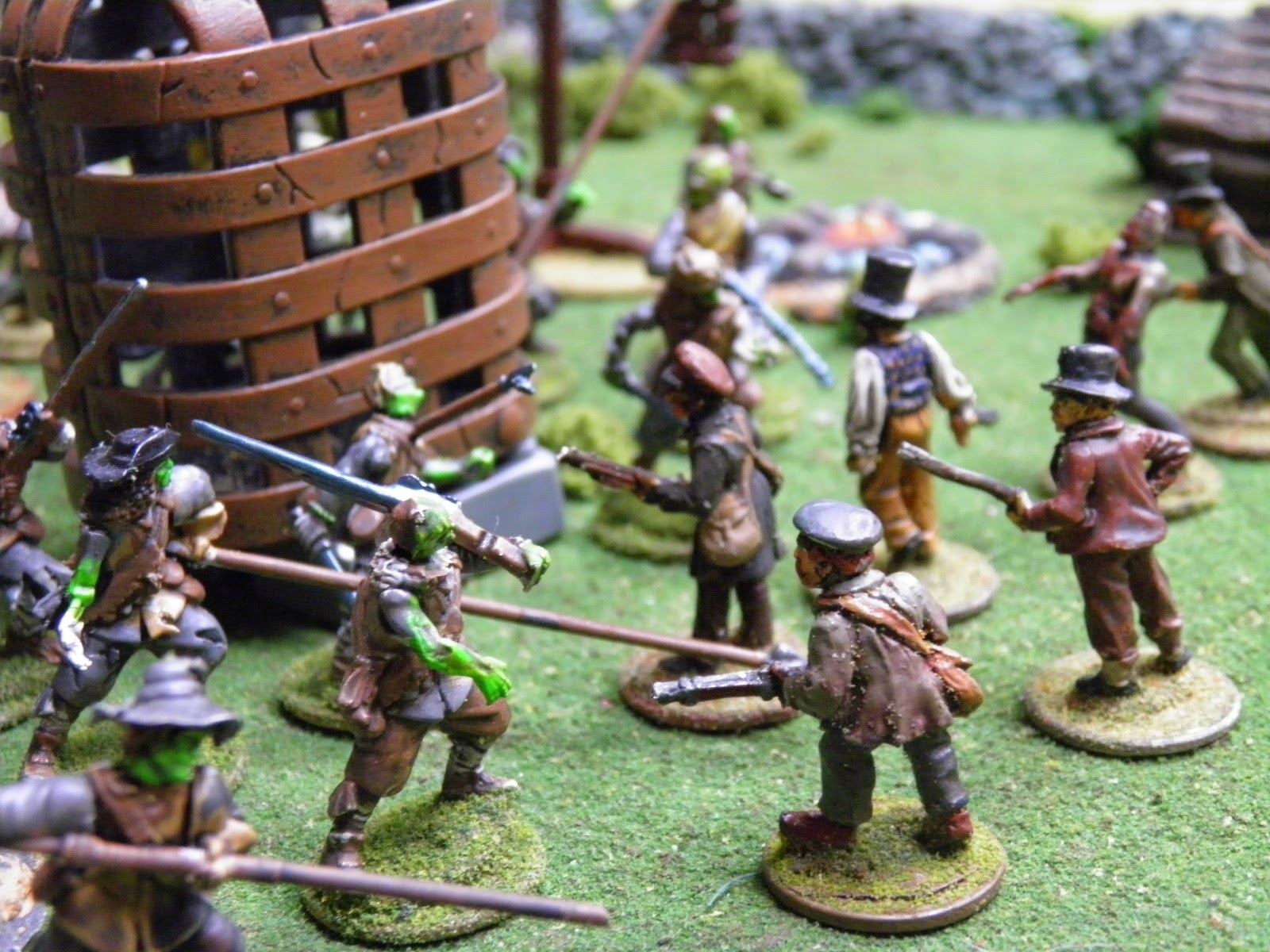 A certain lack of quality control at the burning fields. 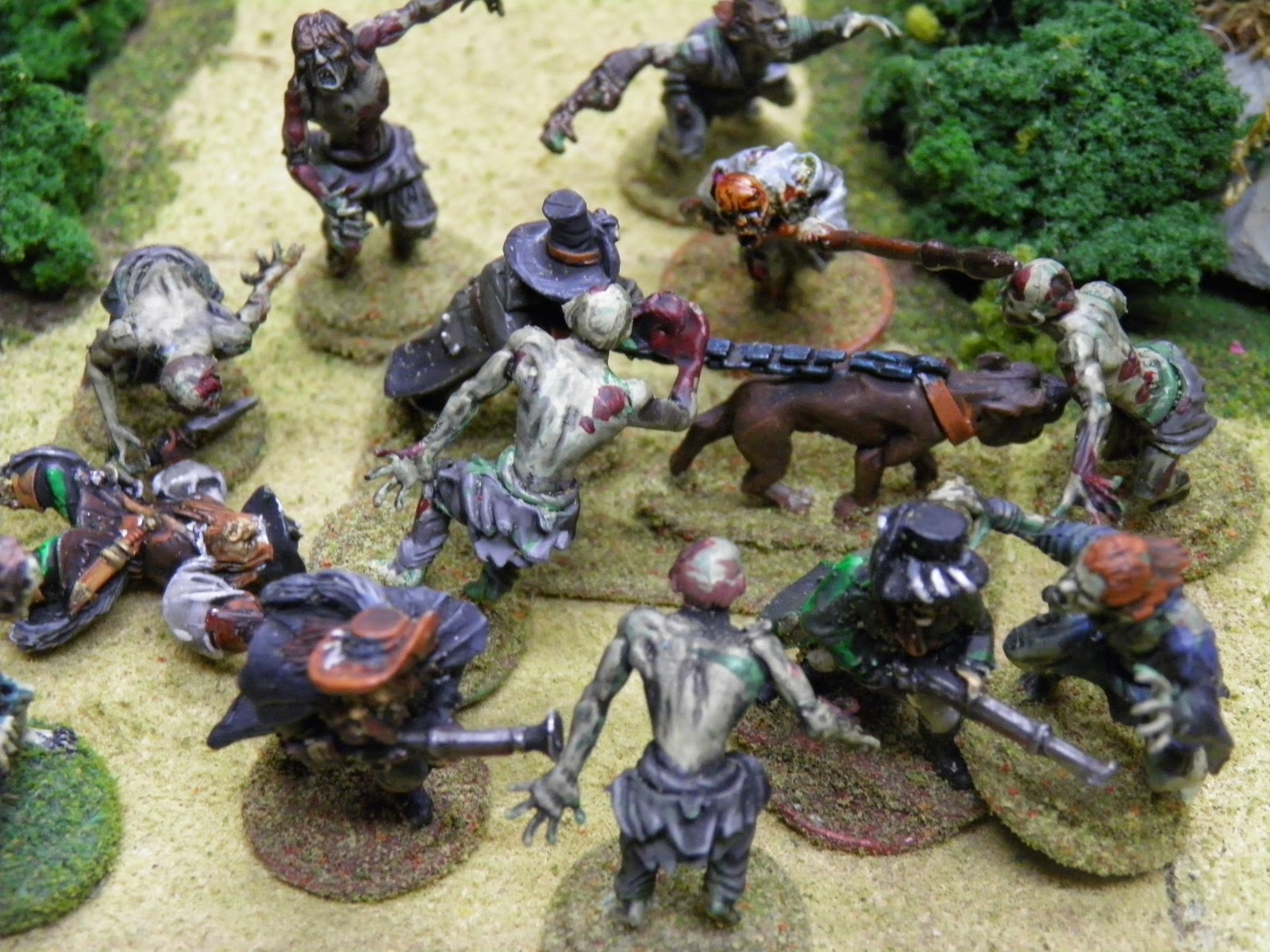 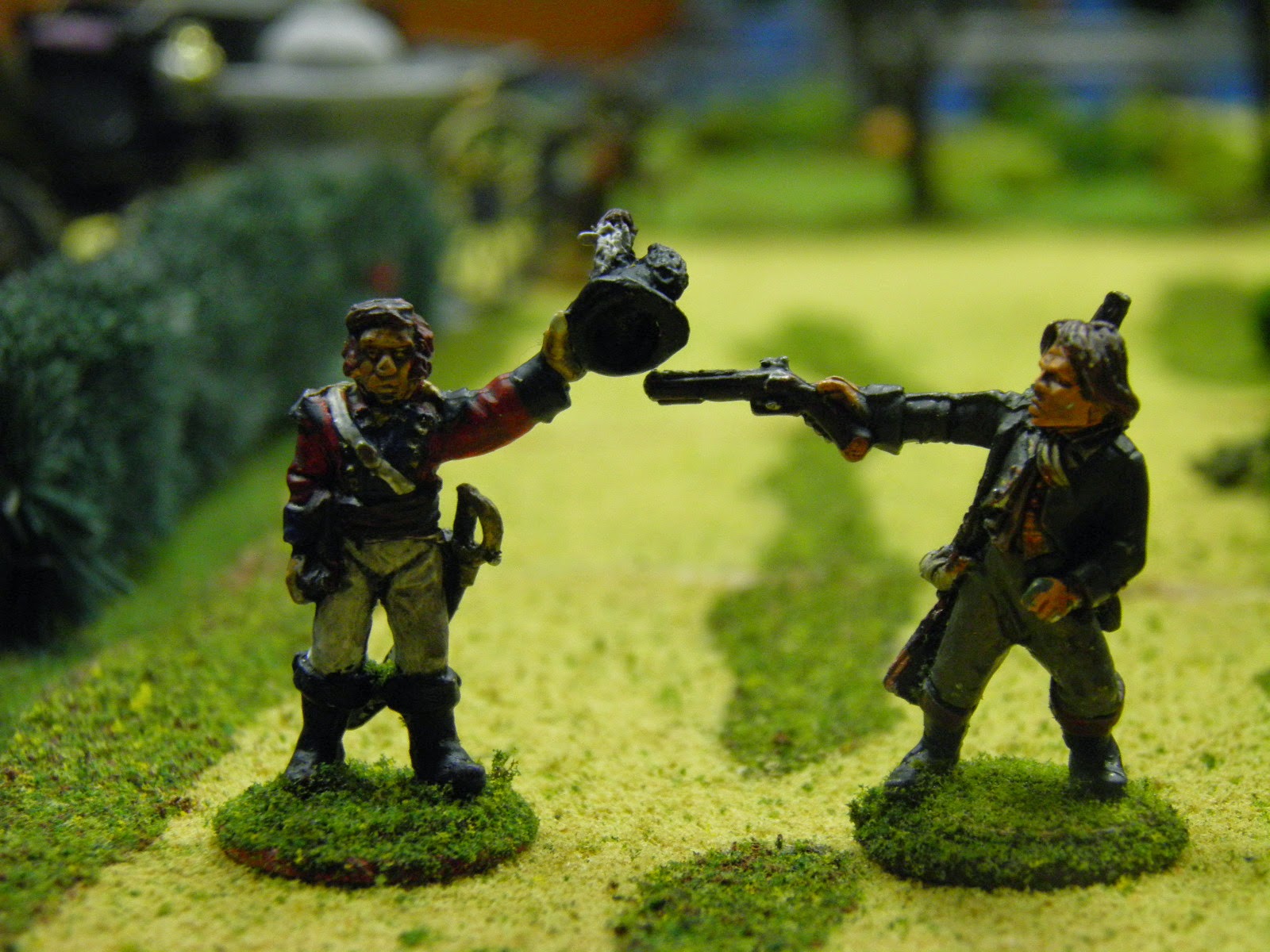 Mr. Darcy convinces Mr. Wickham to do the right thing. 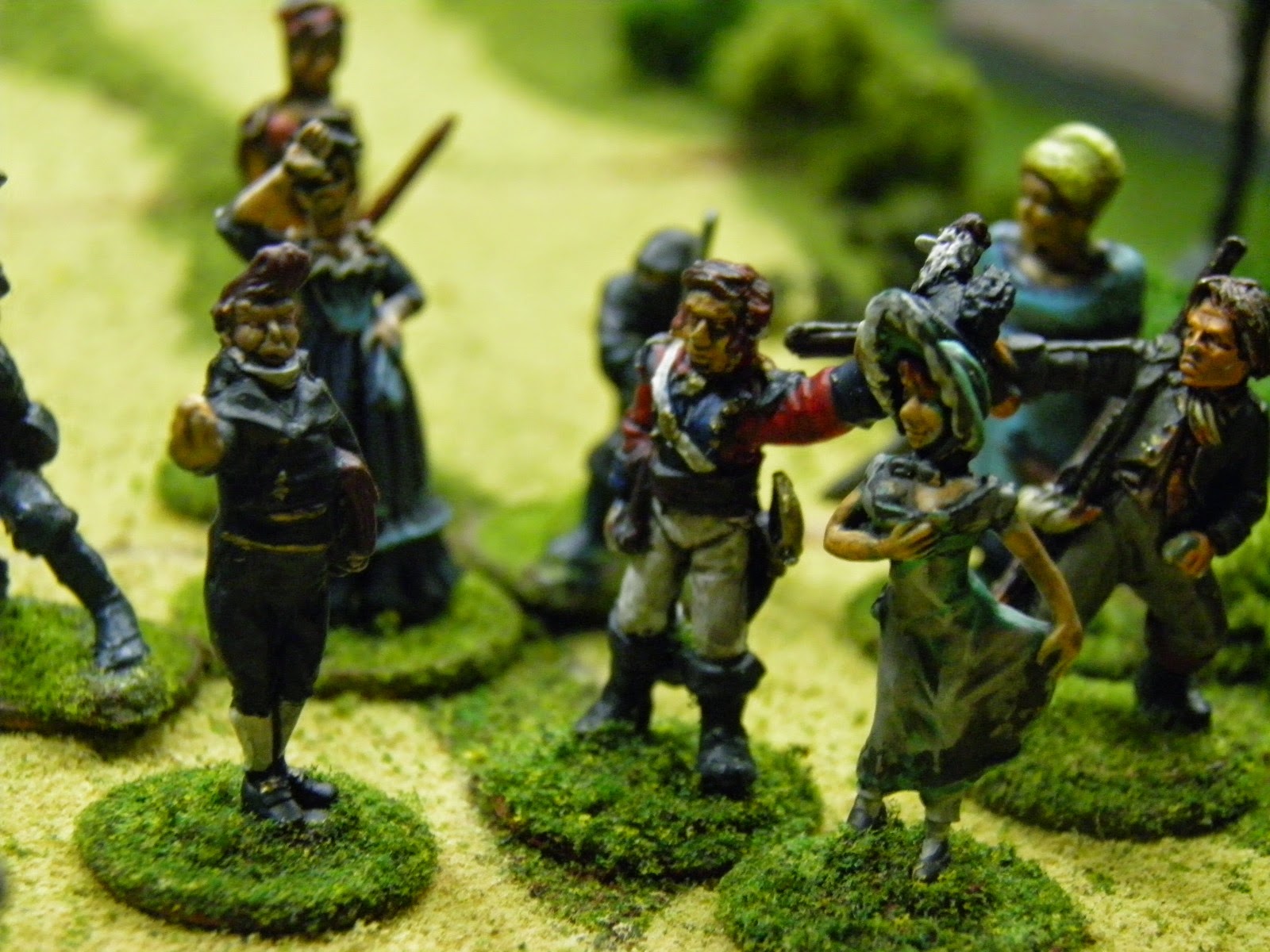 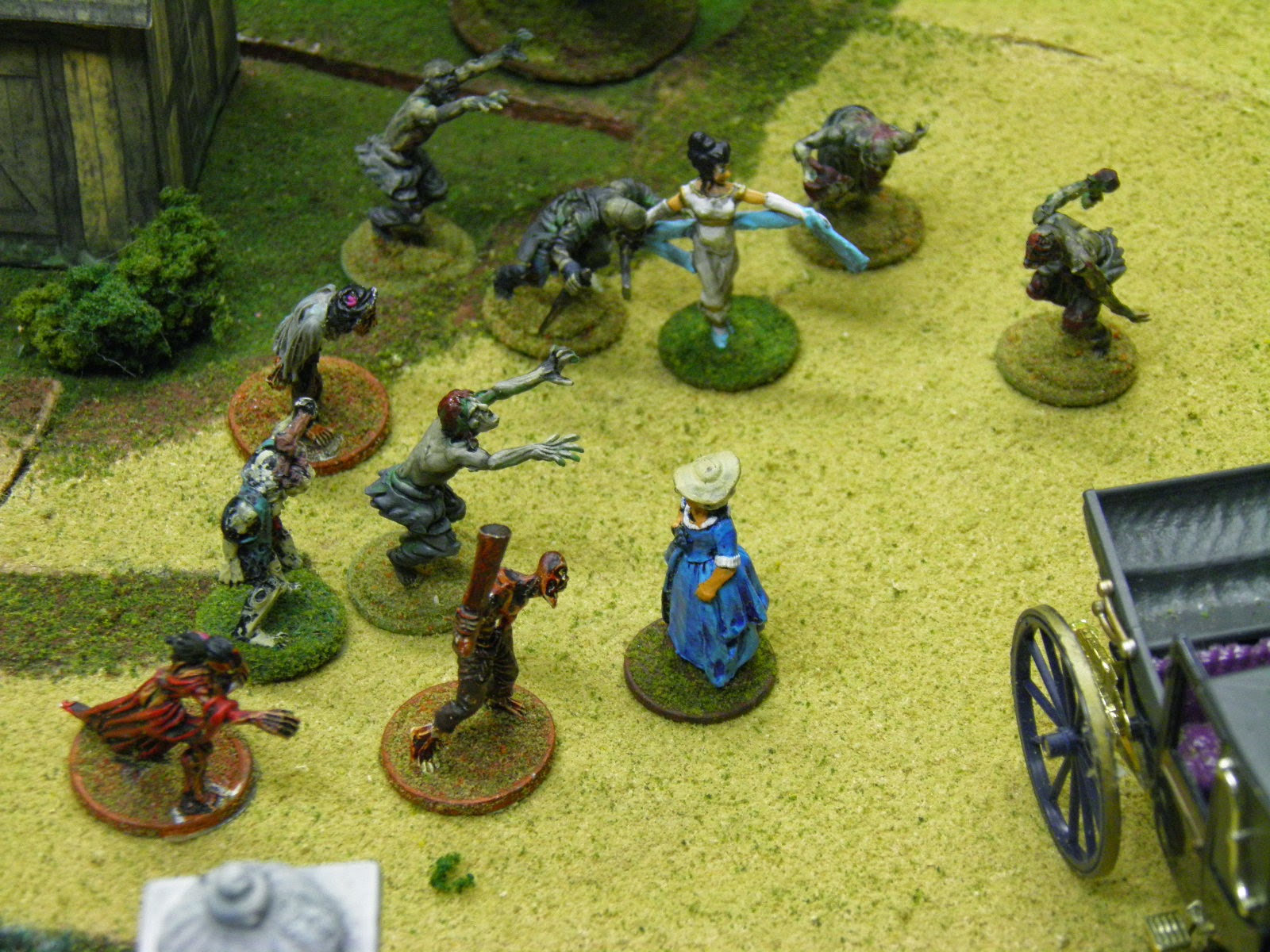 A Zombie-off with Lady Catherine 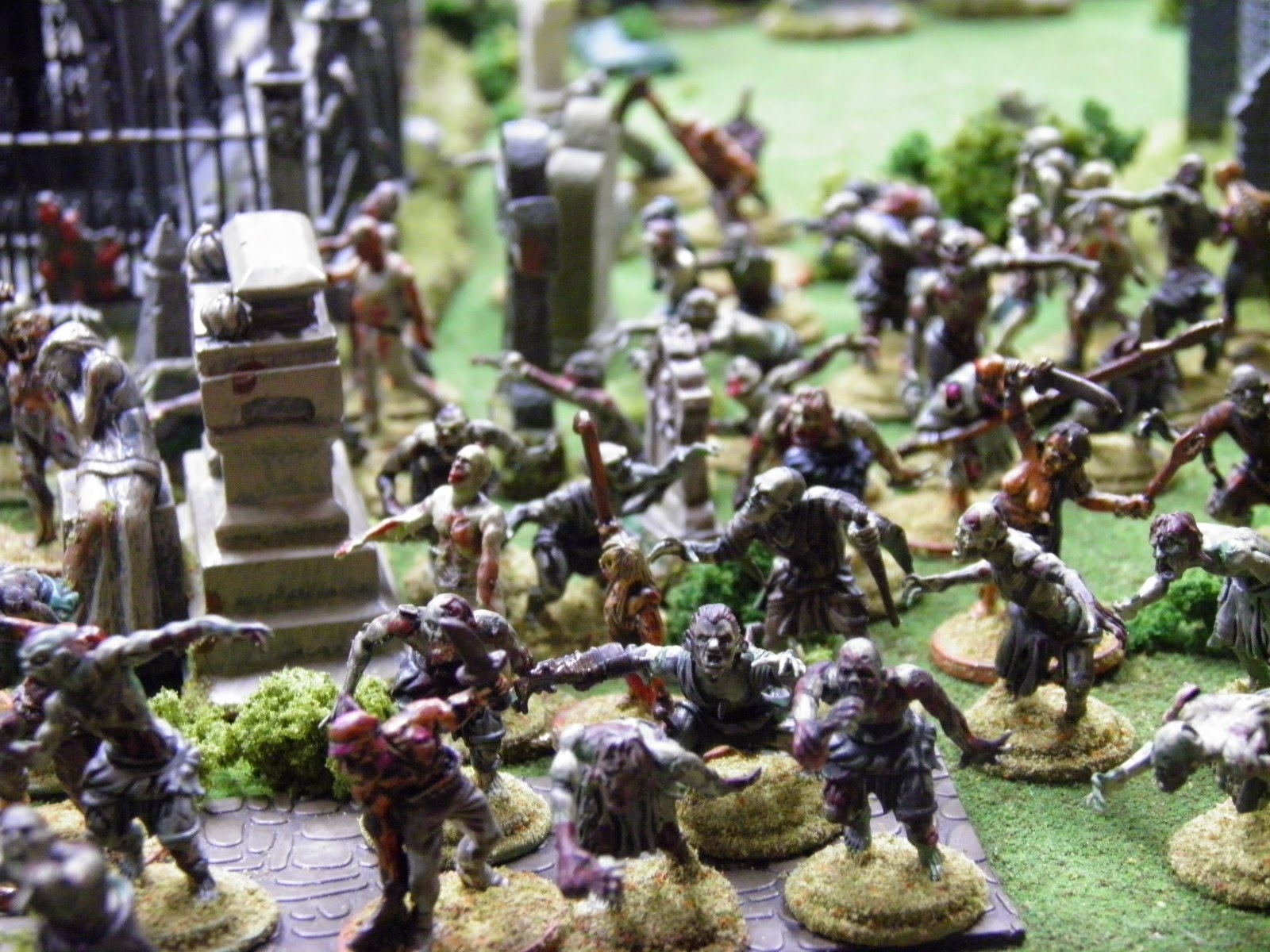 I recently picked up the Lion Rampant from Osprey.  I recently got a chance to play out a game with a friend. We both enjoyed the game and it found it very well balanced.  The rules were simple but provided a enough flavor and distinction between the units to give a unique feel to the game.

This was a bit of a change for me - a pure historical game with no fantastical elements. We decided to run the Sausage and Mustard scenario wherein one player has to destroy four supply points.  I set these up as a small village in the center of the board. 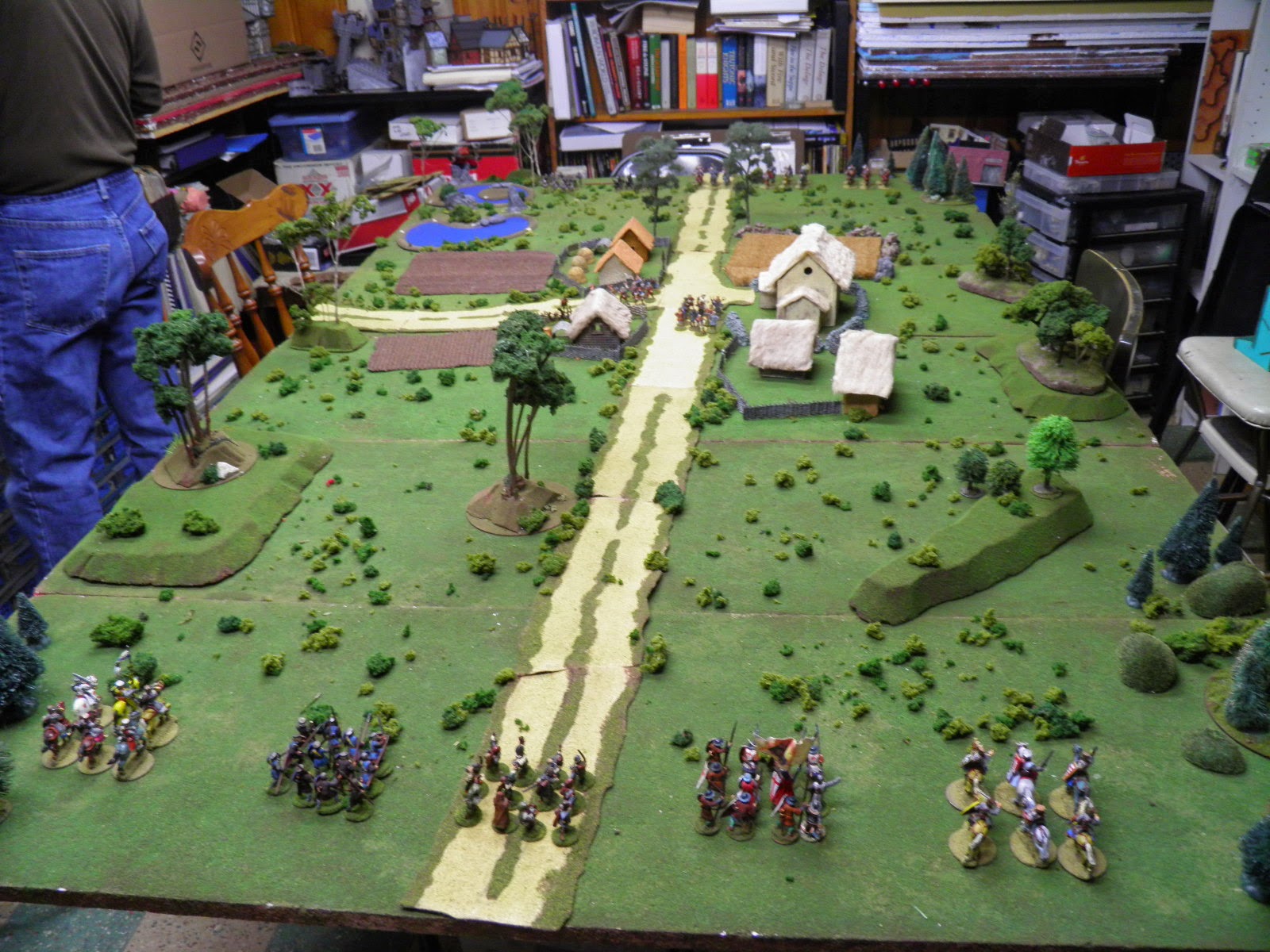 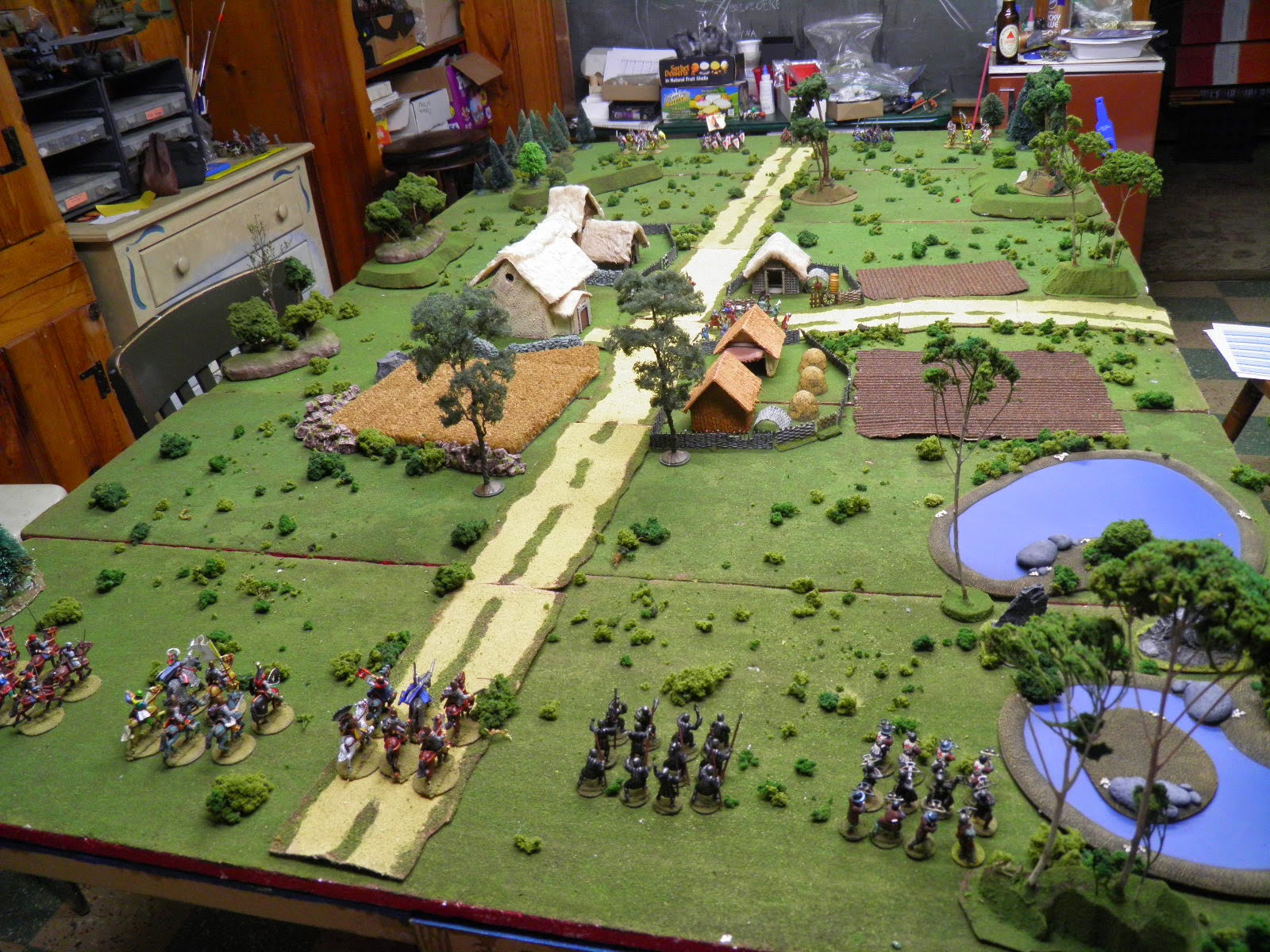 We used the basic Early English and French retinues from the book with an additional 2 points to each side. 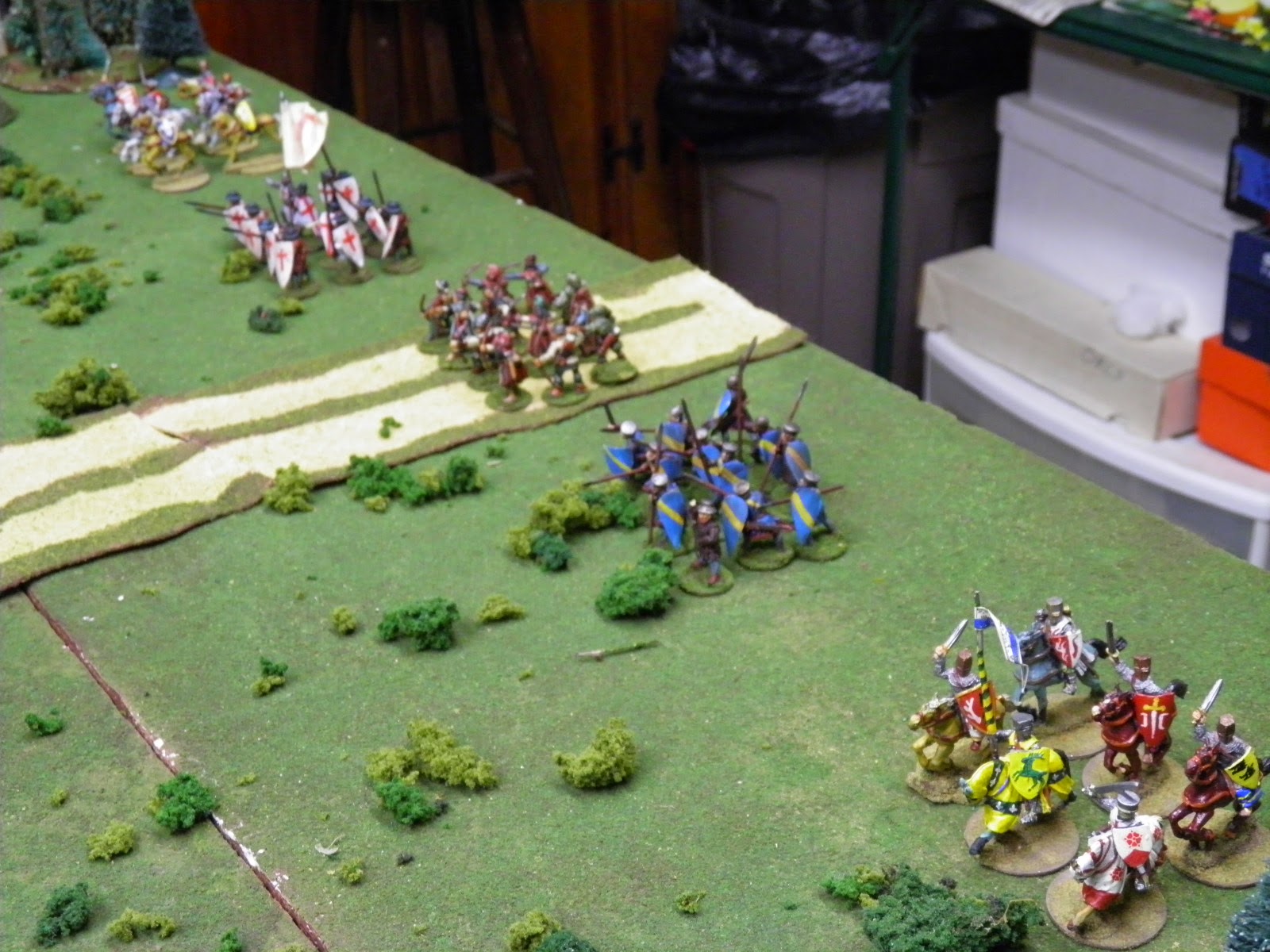 The English had 2 mounted men at arms units, 2 foot sergeants, and a bowman unit that used the 2 extra points to upgrade to expert.  Their leader rolled a Rash characteristic and so became Lord Flashheart.  We randomly selected which side we were on and I got the English. 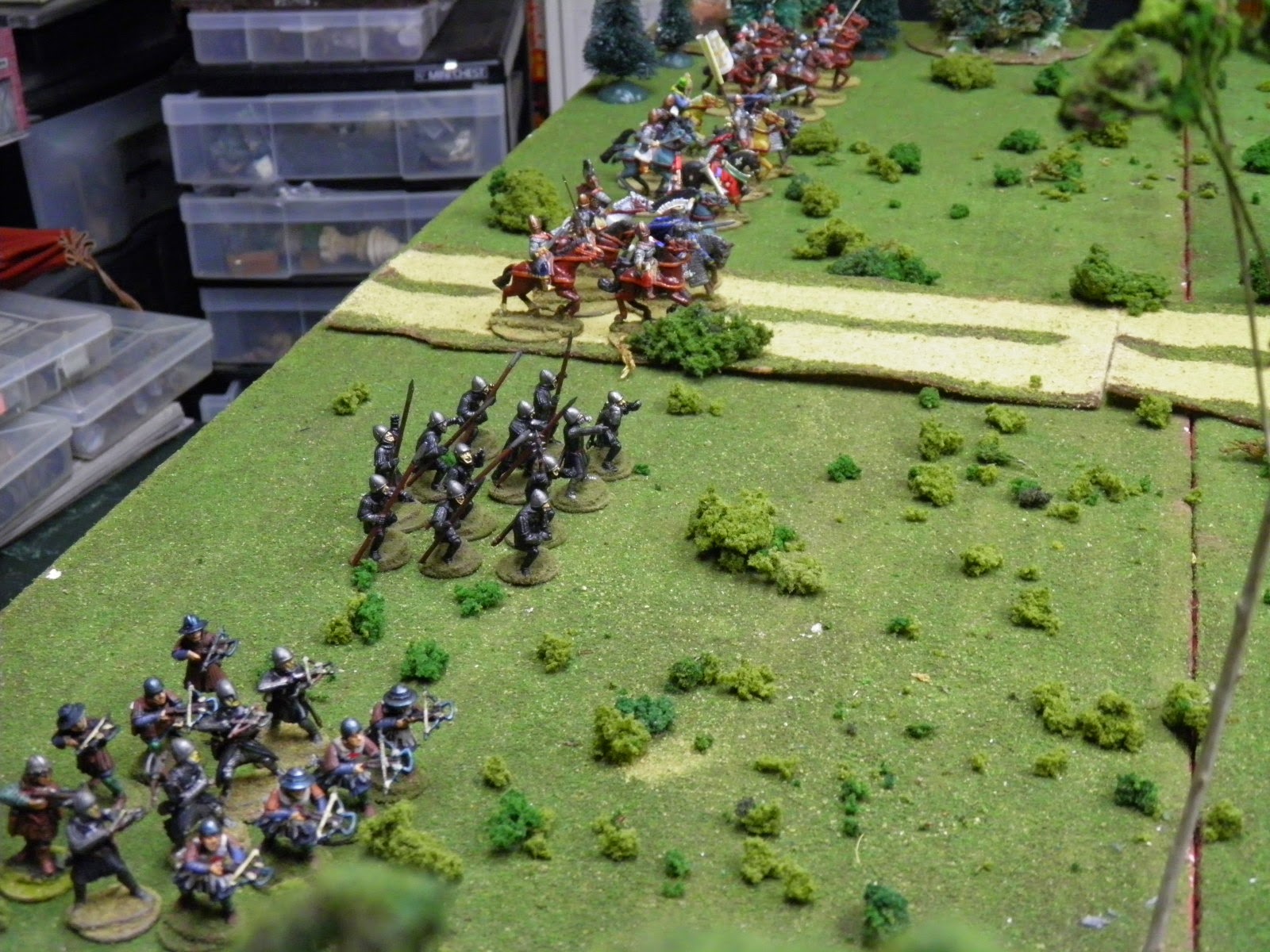 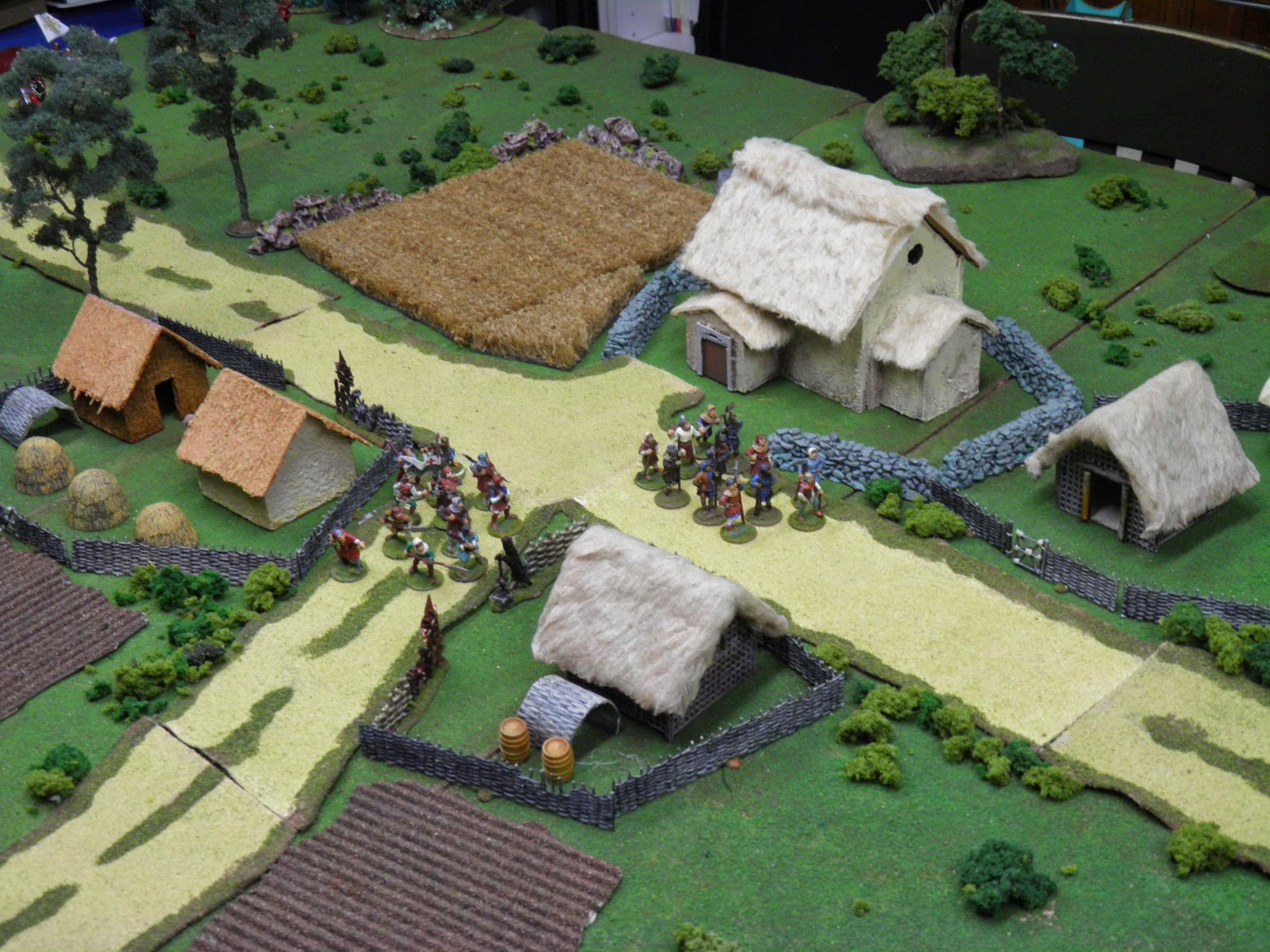 The French had two mounted men-at arms, one mounted sergeants, one foot sergeants, and one crossbowmen.  Their extra two points were spent on two units of serfs who were set up in the village.  The French Lord rolled Insipid and got to be called Sir Guy de la Wombat (of MP&THG fame). 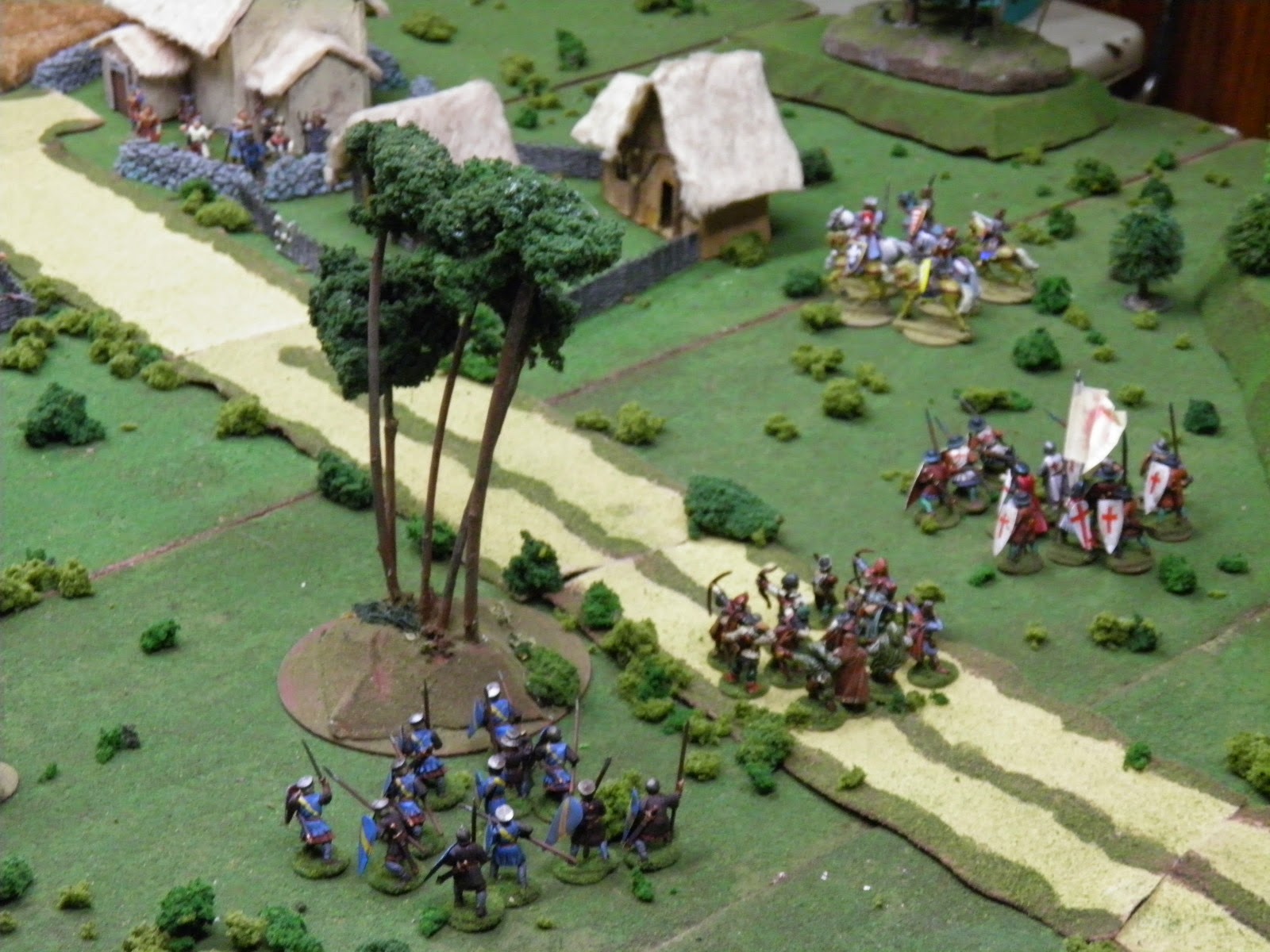 The French had a bad series of activation rolls so my English pushed forward to the edge of the village pretty quickly.  Lord Flashheart plunged ahead to circle the village and routed the French mounted sergeants. 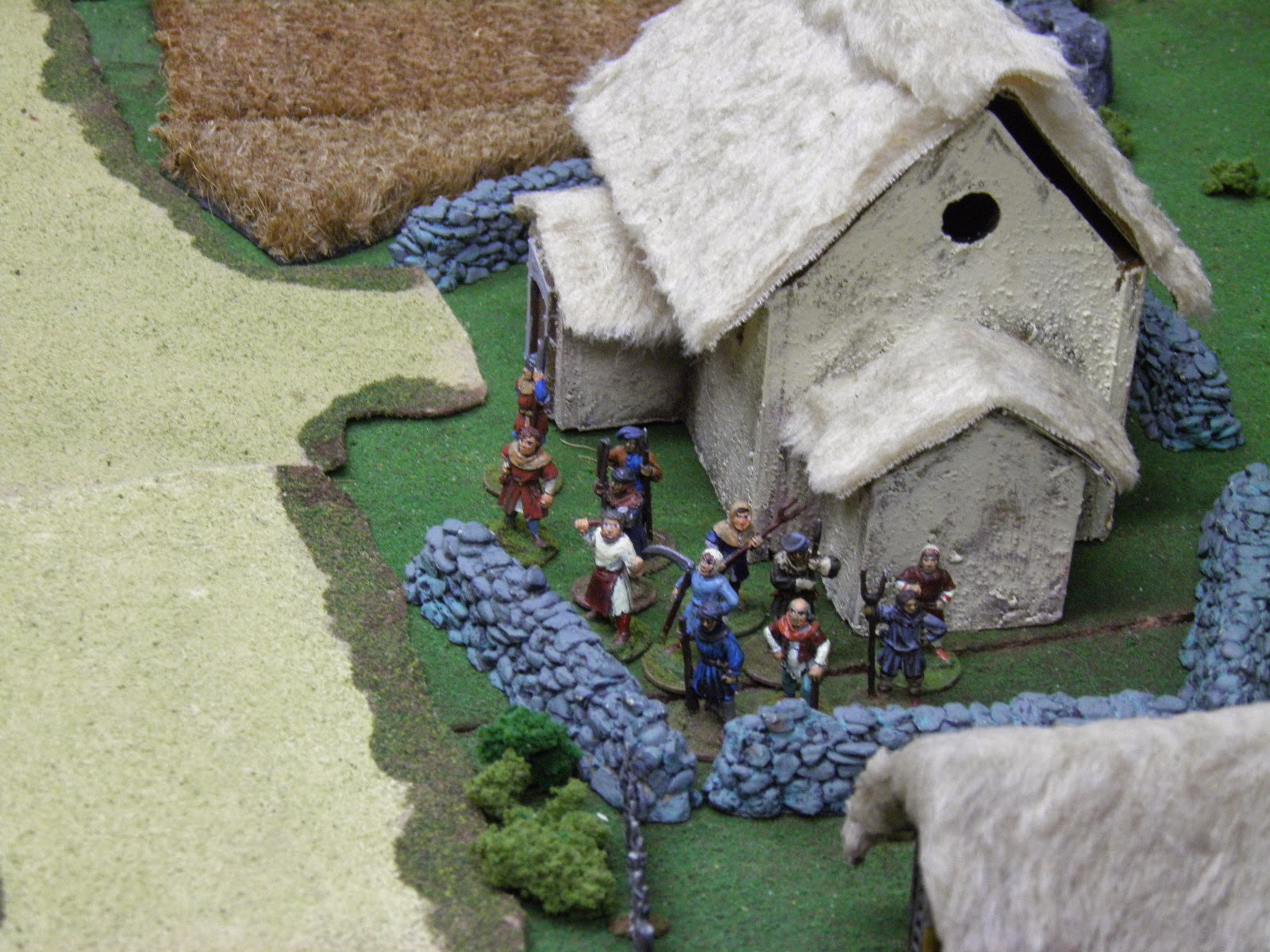 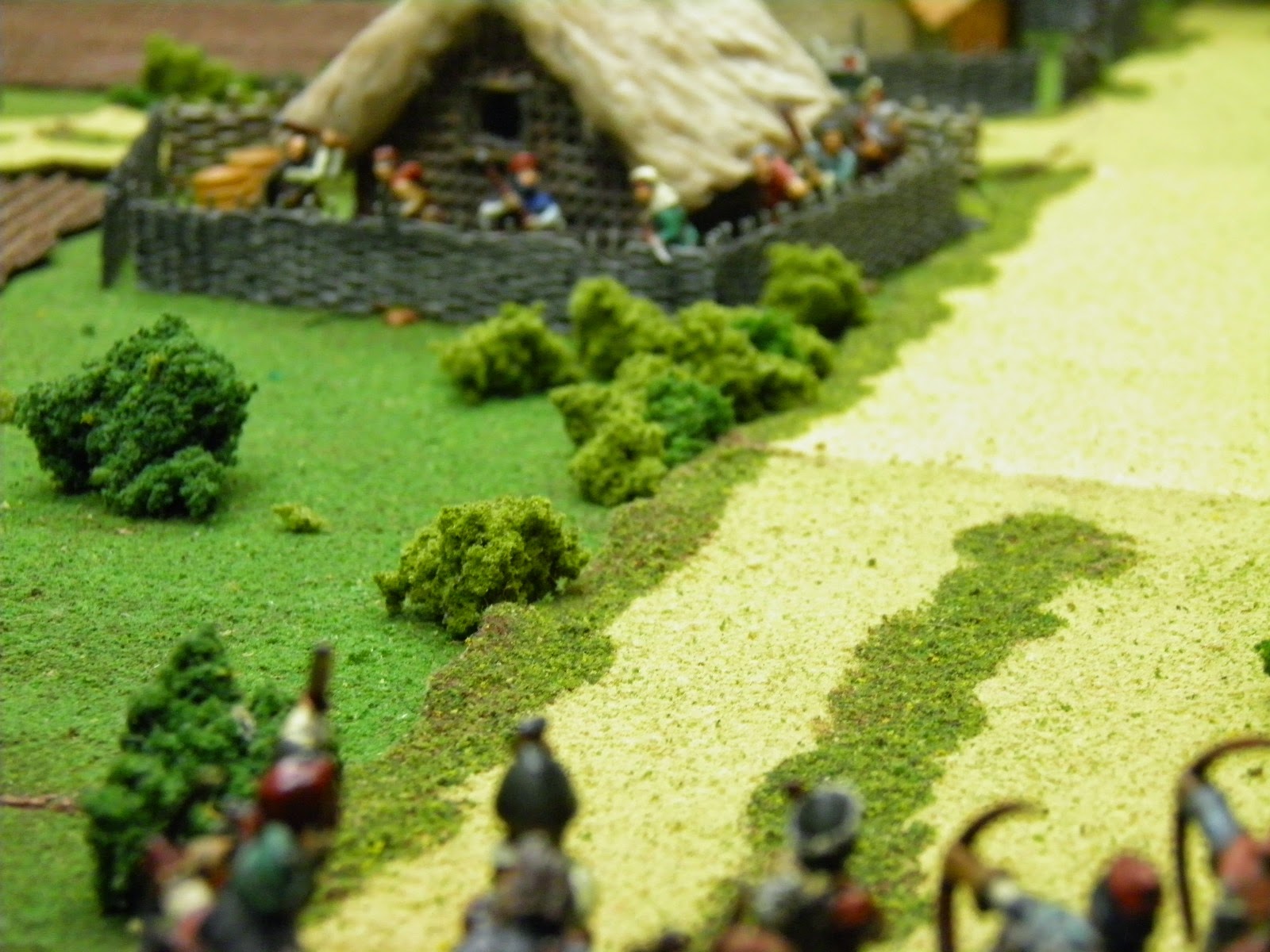 We treated most of the village as Cover but the church was both cover and rough.  This gave the serf the chance to actually put up a pretty decent fight, at least initially. 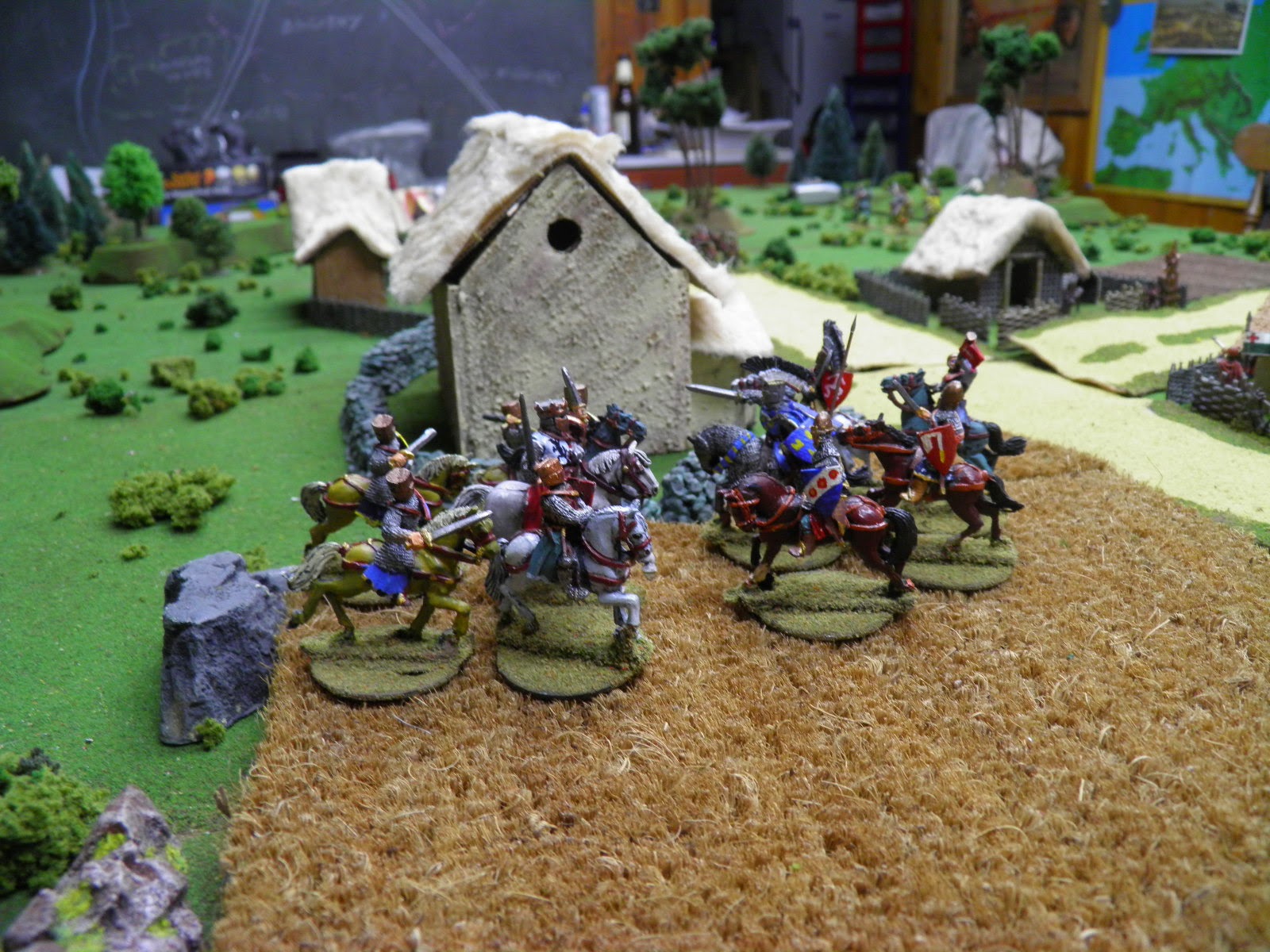 Lord Flashheart's charge continued until Sir Guy spotted him.  This began a series of Wild Charges back and forth that saw Sir Guy killed and his unit of men at arms destroyed (the rest of his retinue barely noticing).  The last unit of French men at arms gained vengeance however, and the rash Lord Flasheart ended his life in a single-man Wild Charge against four french knights. 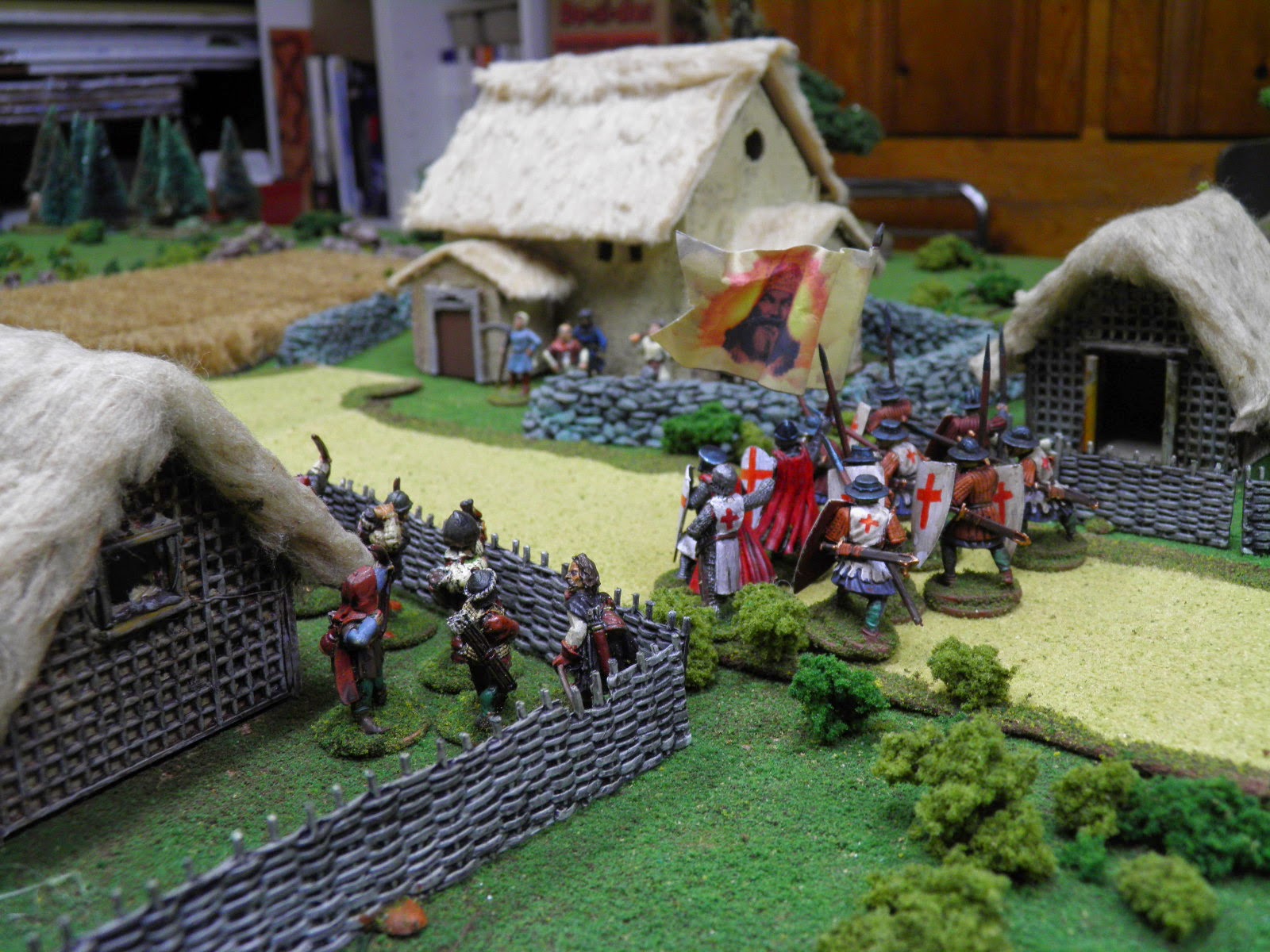 Meanwhile, the English foot pushed its way into the village, the bowman routing off the French crossbowmen and foot sergeants.  Despite a stout defense, the French serfs were driven from the church. 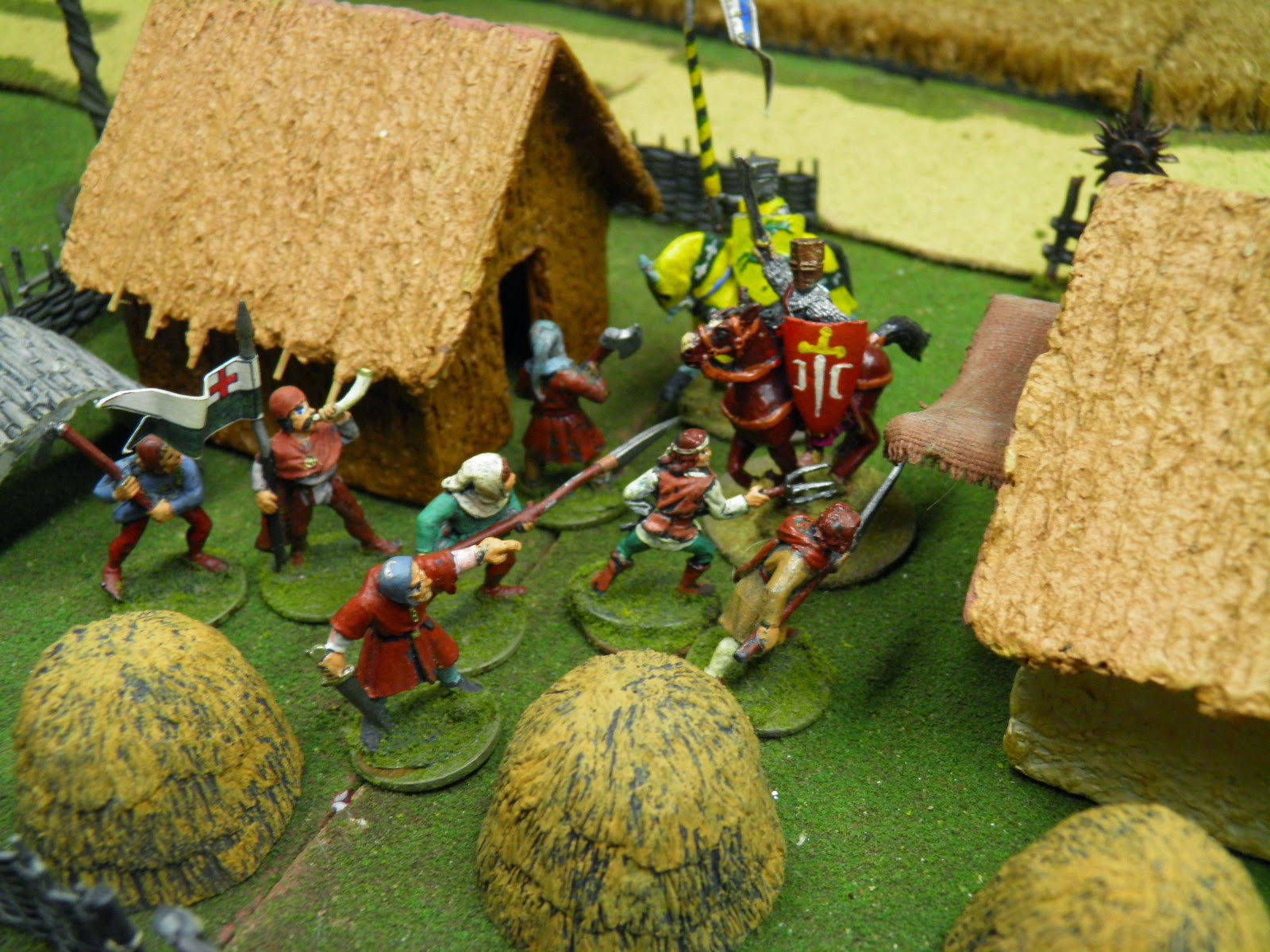 The English mounted men at arms destroyed the last of the French men-at-arms and then, with only two knights left, rousted the other serfs from the village.  At this point, the French player conceded that he would be unable to retake the village before my troops could burn it - they had already started one of the buildings on fire.  A very close run thing with the heavy casualties among the knights. Definitely will be playing this again.
Posted by bogdanwaz at 12:44 PM No comments: