This is a brief report on my trip to Cold Wars.  Given other engagements and renting a table in the flea market, I only got to game on Friday but it was a full and fun day. 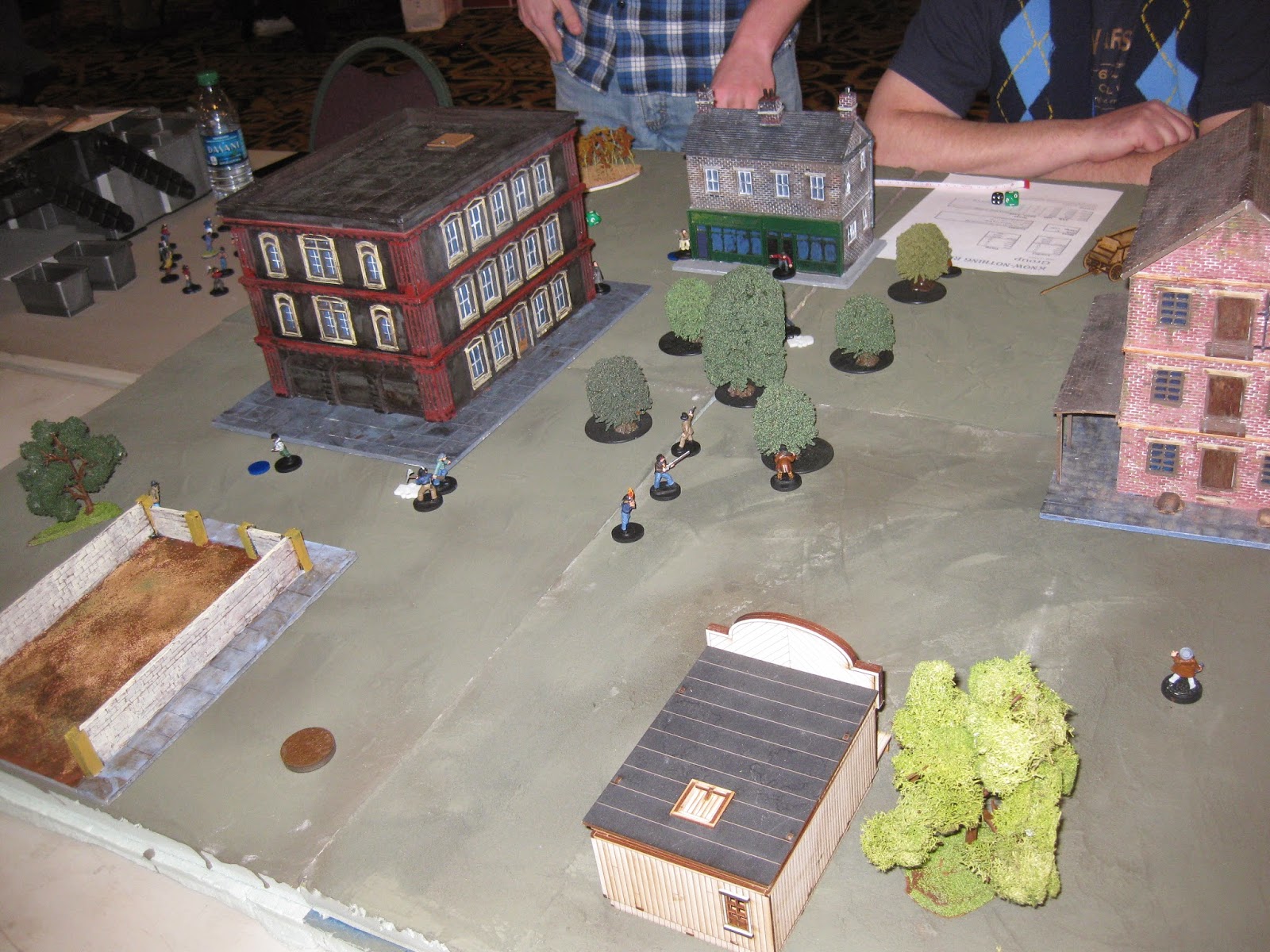 In the afternoon I played on Zeb Cook's Baltimore Election Riots of 1856.  A delightful game once we got over the fact that people actually fought over whether James Buchanan or Millard Fillmore should be President.  It was the Democrats vs. the Know-Nothings and I was one of the latter - perfect casting I suppose.  The Democrats got an early lead in stuffing the ballot box and just as we were about to "make proper adjustments" to the vote, they absconded with the ballot box.  Even though poor Fillmore lost, we had a great time. 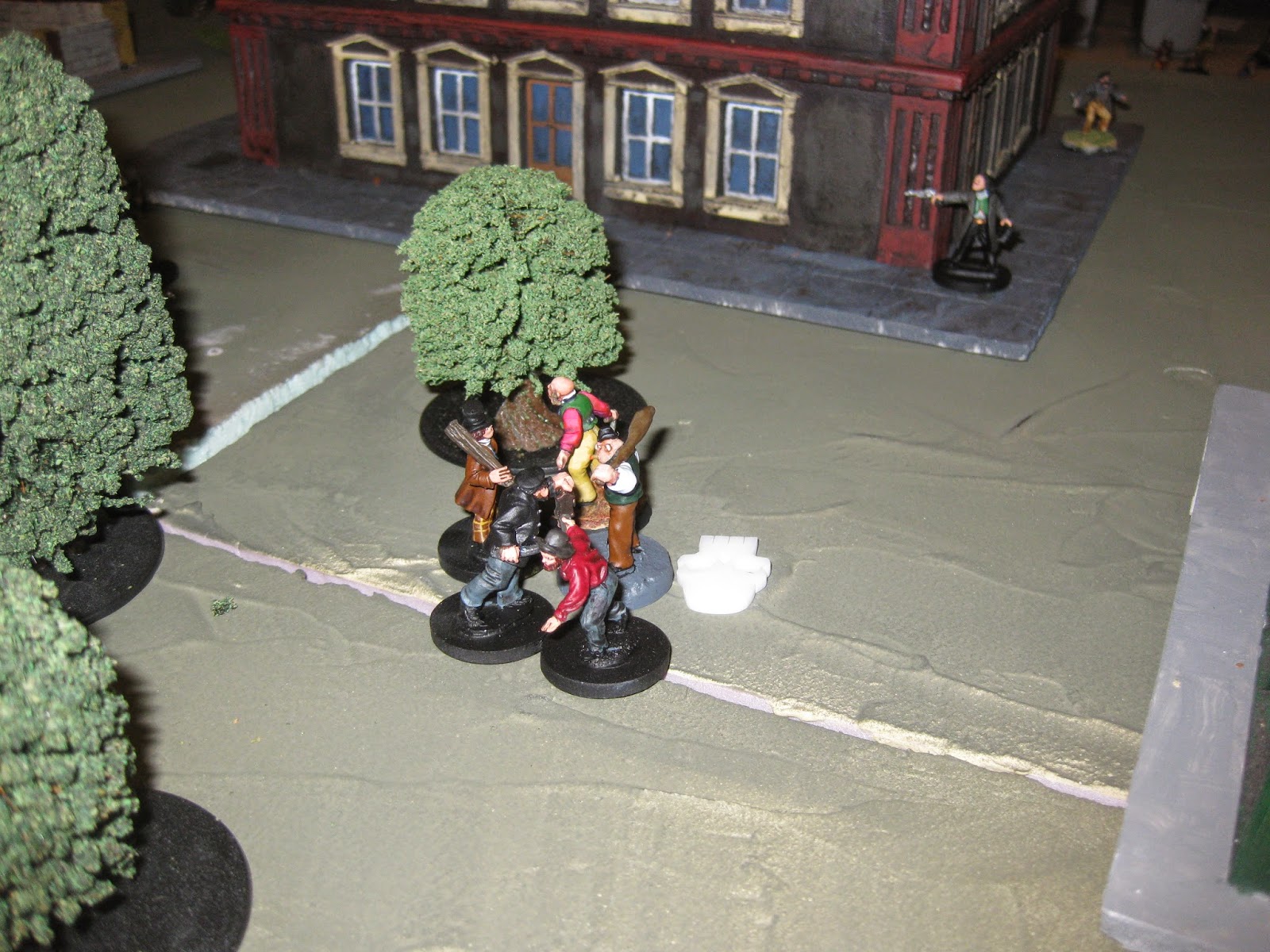 A slight disagreement over politics 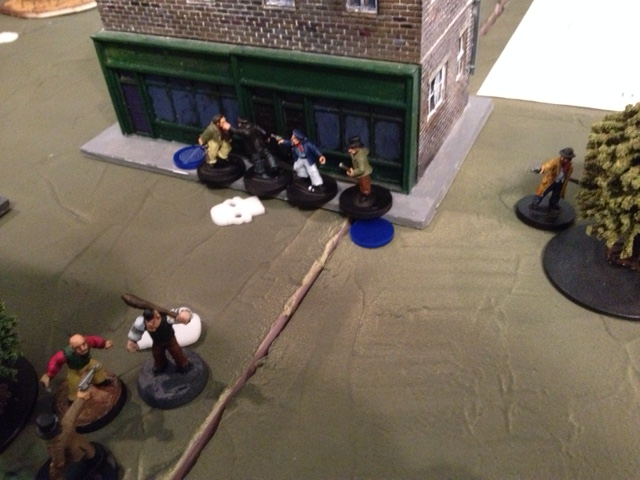 I ran my Sharpe's Pride and Prejudice and Master and Commander and Zombies game and thought it went very well.  Originally scheduled for 8 players, I ended up with 14 players total but all seemed to have enjoyed the chaos and everyone got to have their moment.  We ended up playing to a conclusion in about 2 and 1/2 hours - special thanks to Steve Braun for helping me run the zombie hordes. Unfortunately, I wasn't able to take too many pictures.

The games was really about the romantic travails of the five Sisters Bennett, living in genteel poverty in Regency England.  Oh, and there's zombies. 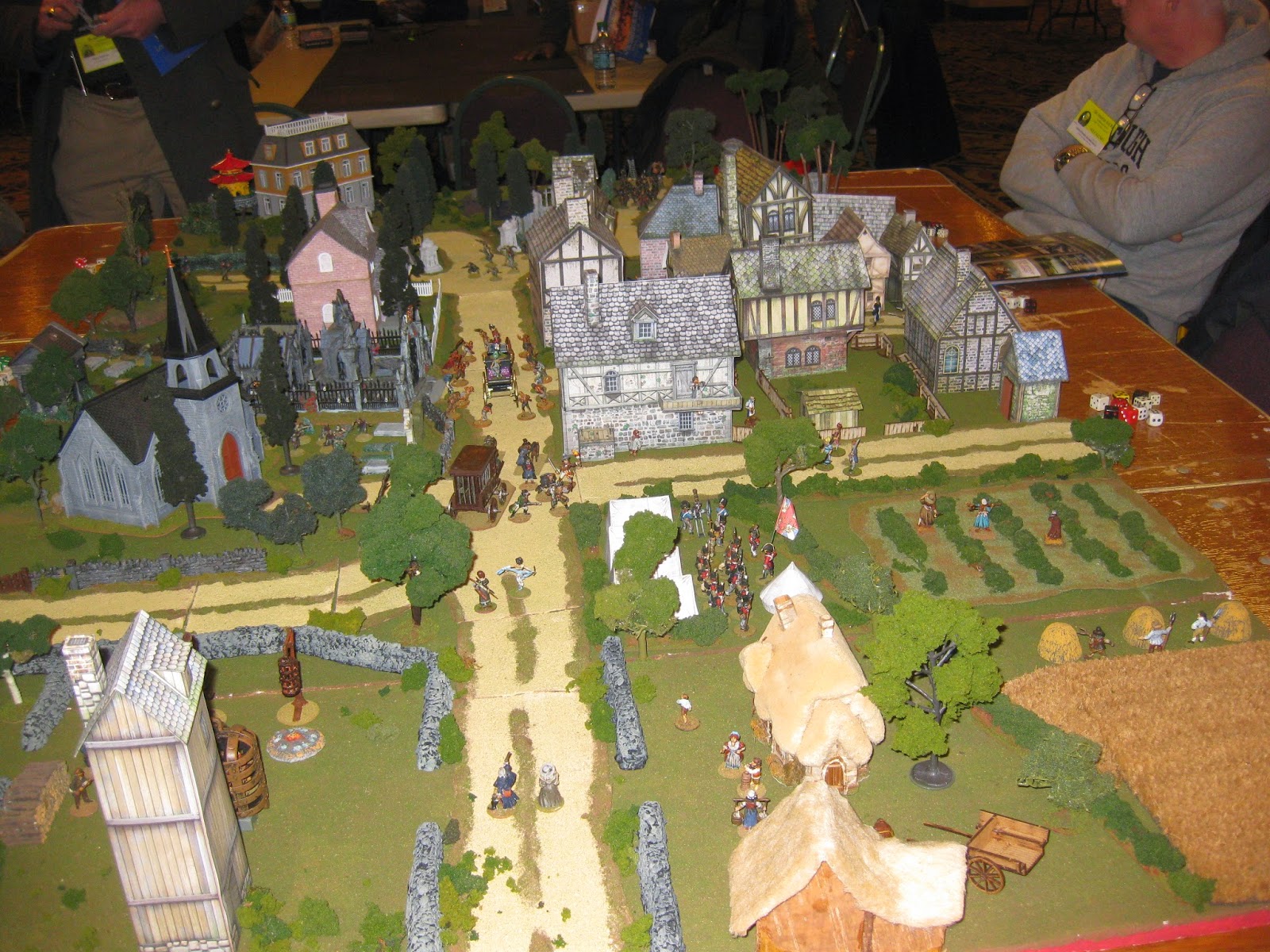 The zombies were primarily a distraction from the players' objective of rescuing Lydia, the youngest of the Bennett sisters who had run off with the scoundrel Mr. Wickham.  The zombies did provide the advantage of bringing large numbers of eligible men into the area, in the form of Richard Sharpe and the 95th Rifles, Jack Aubrey and the crew of HMS Surprise, and the Scarlet Pimpernel and friends who were somewhat at a loss of occupation since the Reign of Terror ended. 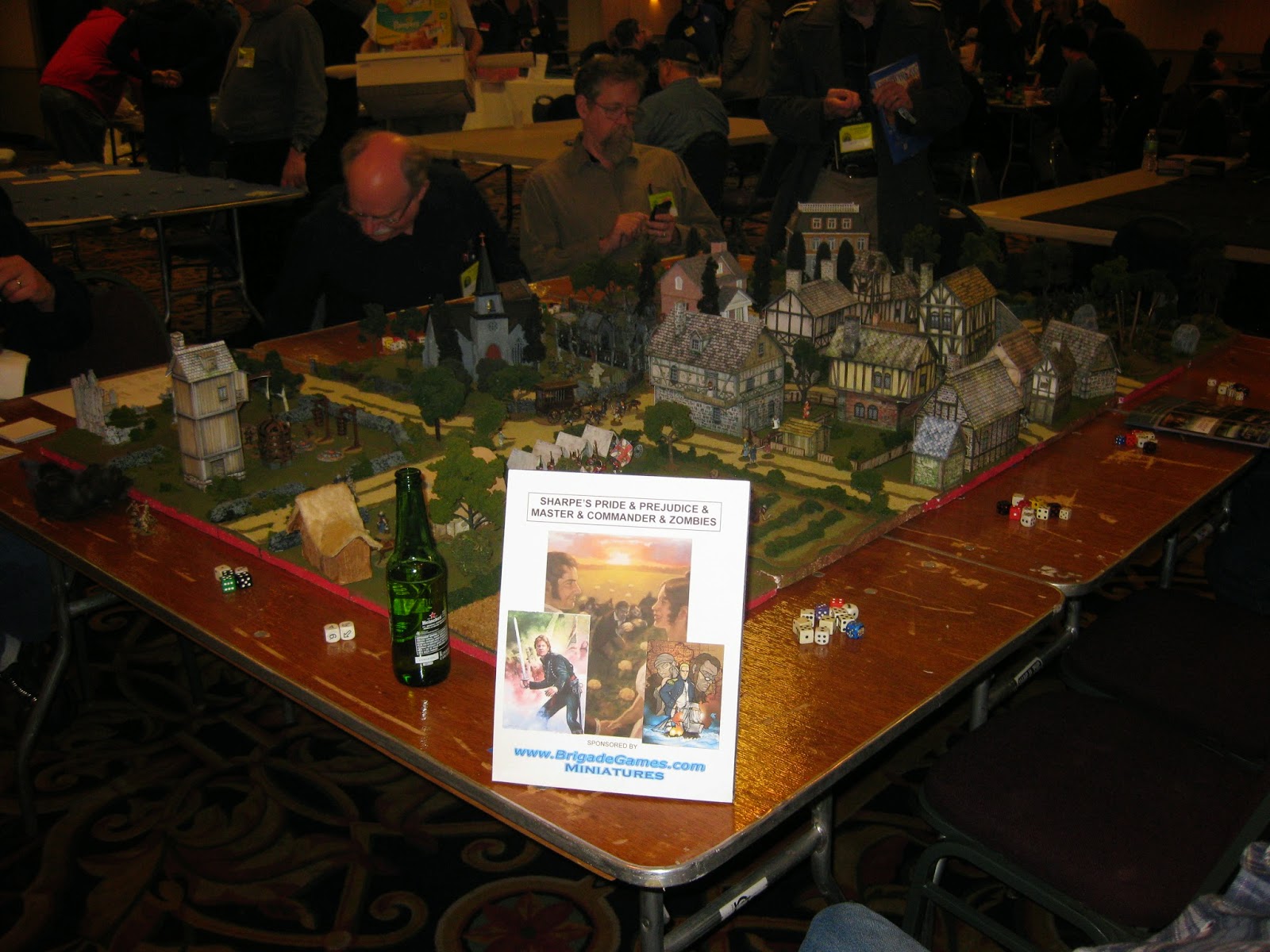 The dastardly Wickham's carriage was wrecked while trying to run over a horde of Unmentionables.  He took refuge in a nearby butcher shop, using poor Lydia as a human shield.  This allowed the rest of sisters, with the aid of the officers, to push their way through the zombies (after coming up with the stratagem of ringing the village church bell to attract the zombies away from the shop), round up a parson, and corner Wickham.  Mr. Darcy, who was smitten with Elizabeth, bribed Wickham into marrying Lydia, Dr. Stephen Maturin having found a cure that would prevent the girl from joining the undead.  The game happily ended with a joint wedding of all five sisters, Maturin and Richard Sharpe being among the grooms. 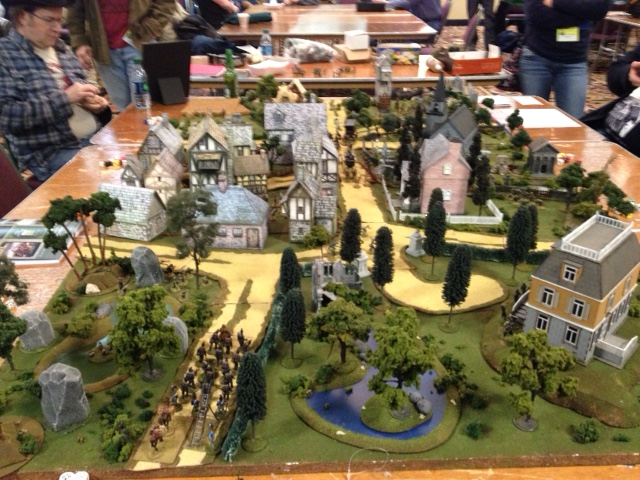 Here's some other games I spotted: 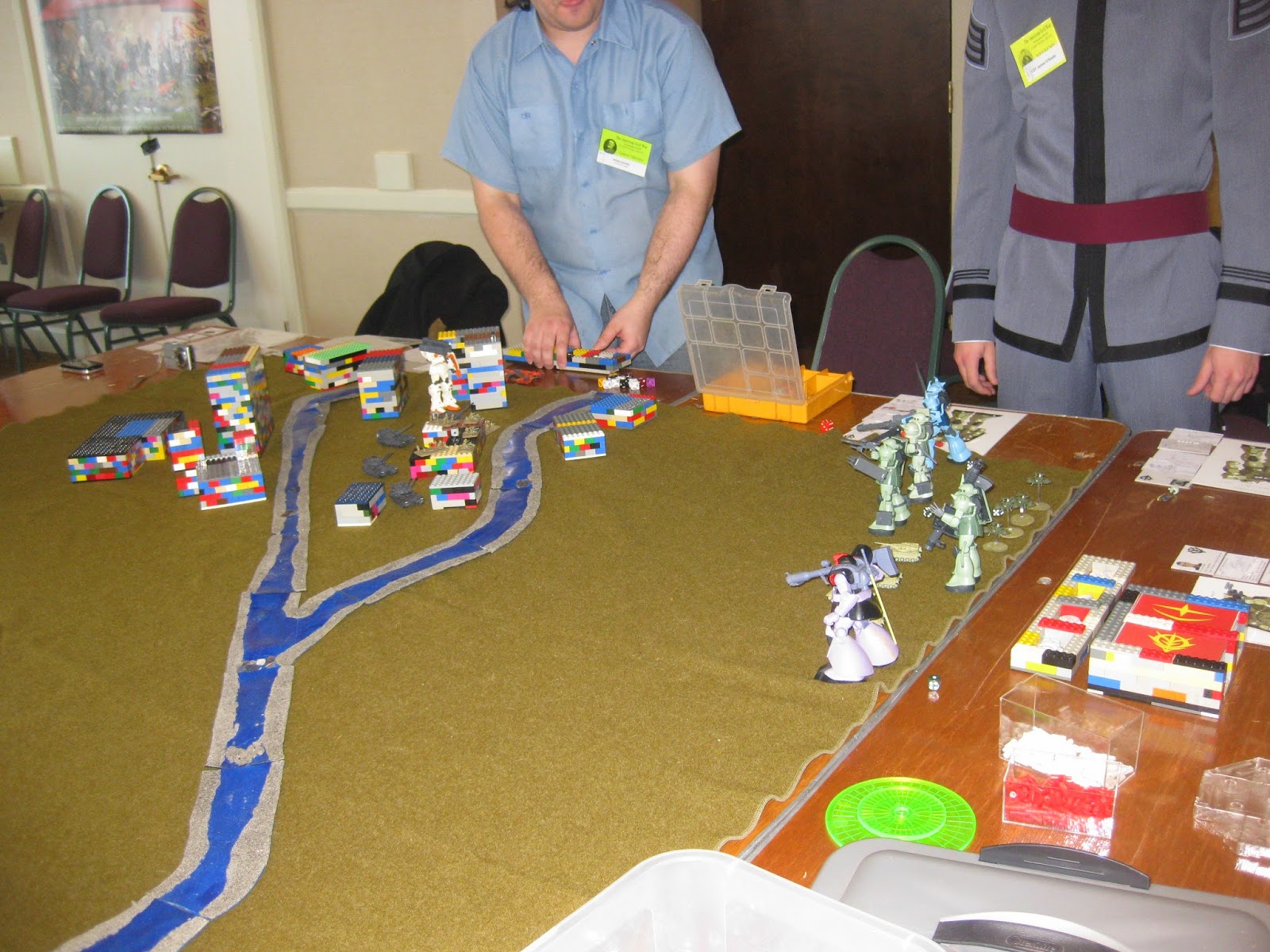 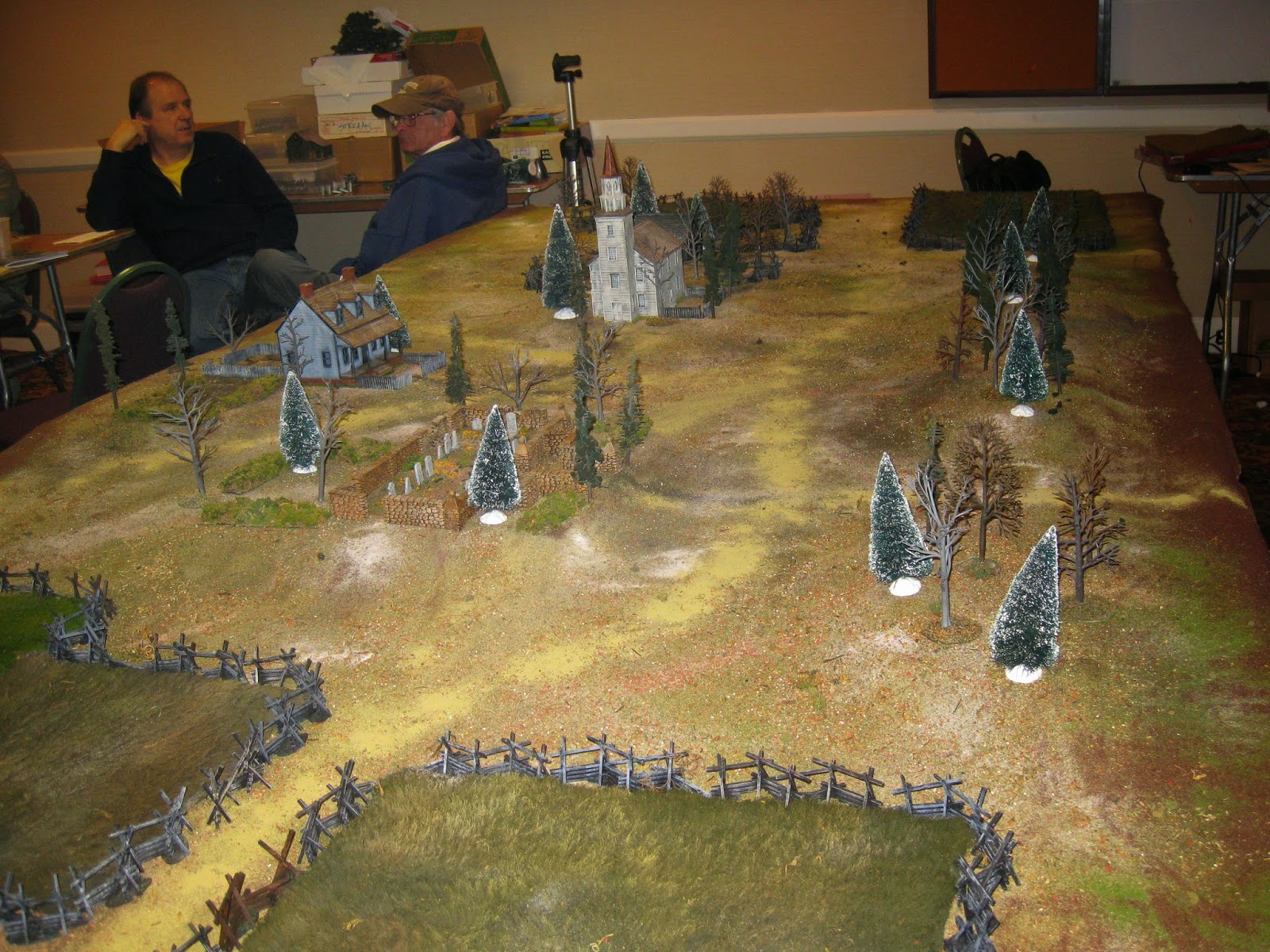 Not sure what type of game was going to be played here but a nice table. 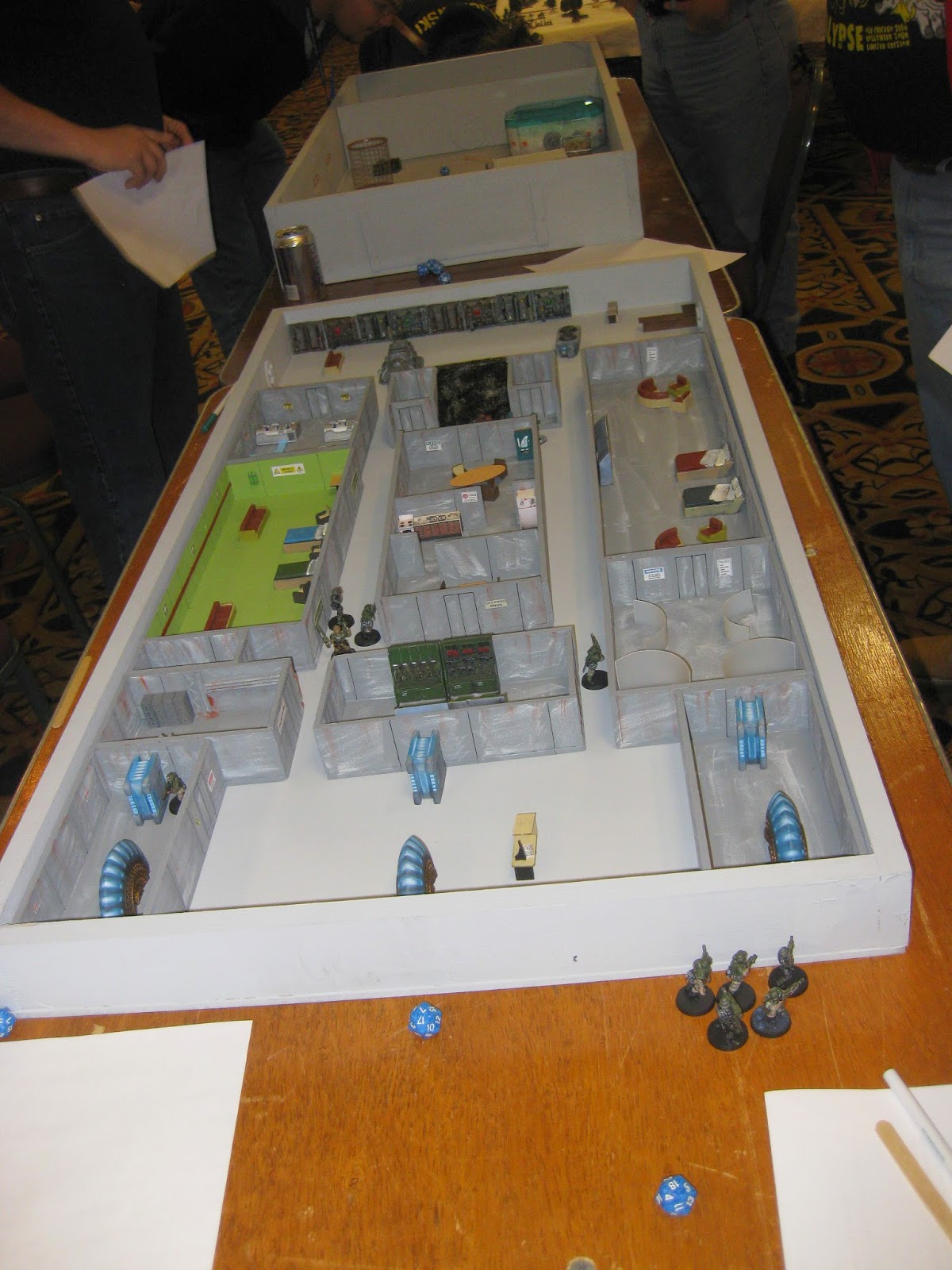 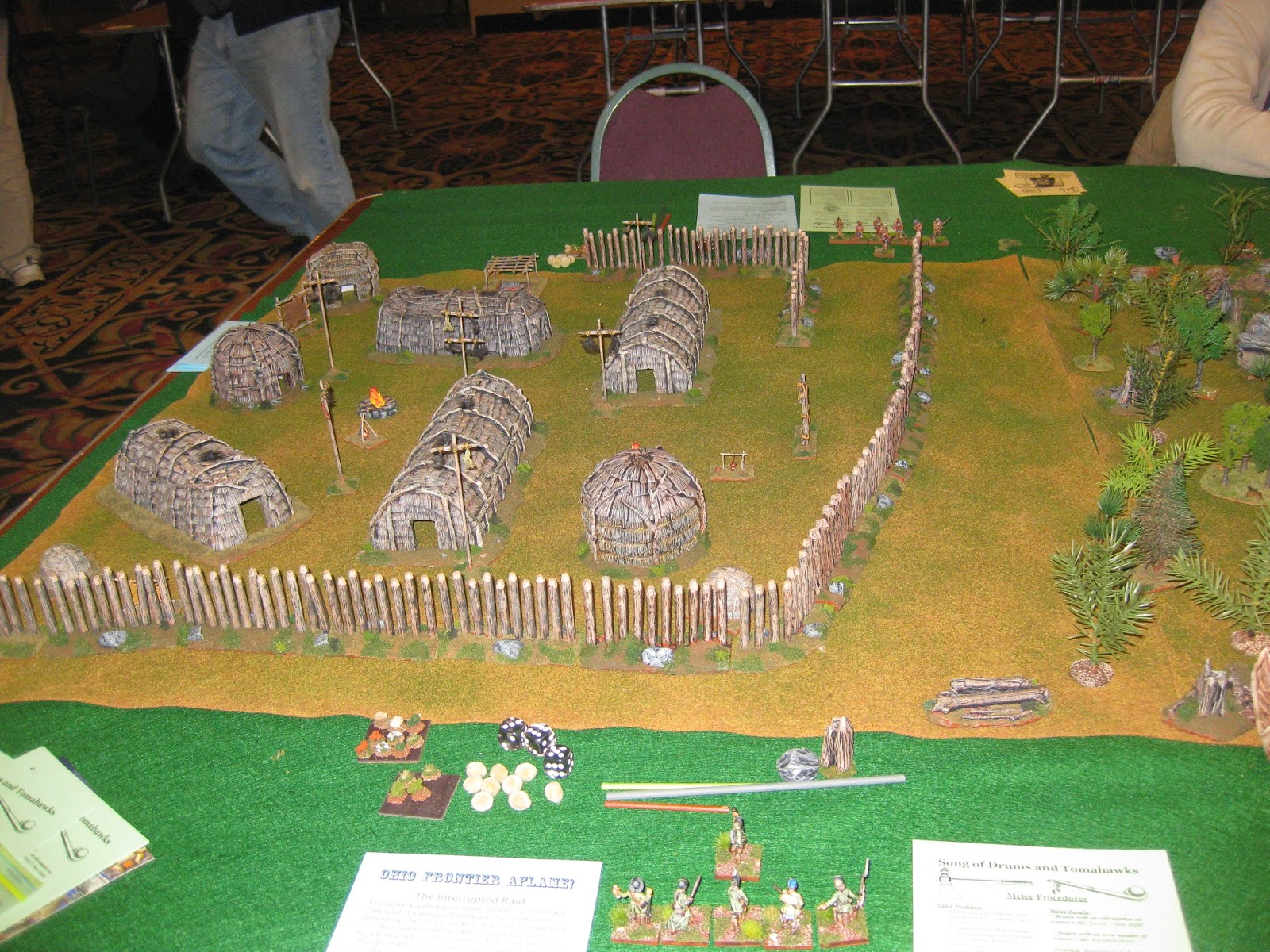 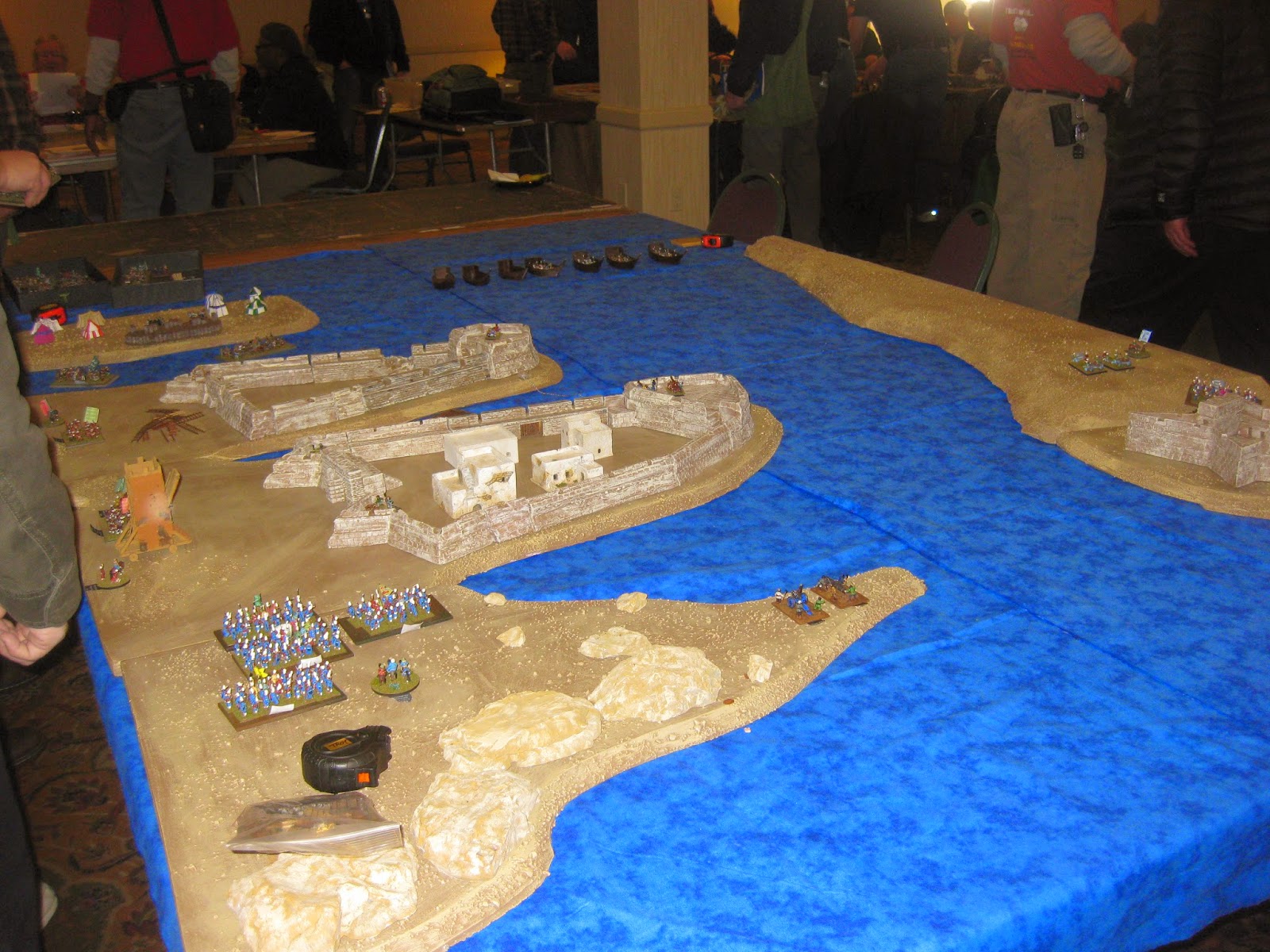 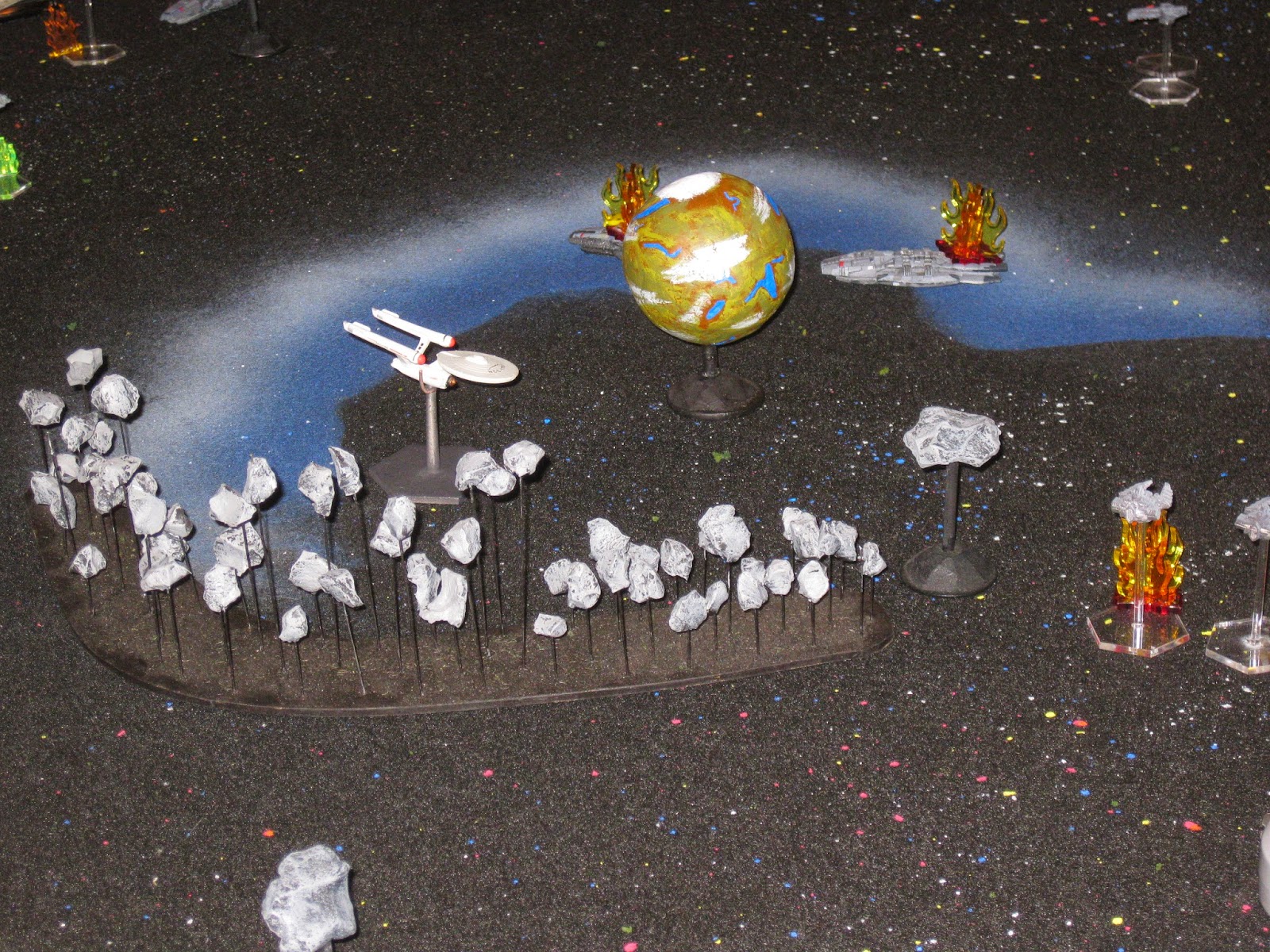 Star Trek game with wonderful "terrain"
Posted by bogdanwaz at 10:00 AM 2 comments: