It’s been a while since I posted - real life has been hectic lately with some very good things and some very bad things. I haven’t had much chance to game let alone update the blog. Fortunately, things seem to be settling down a bit and we’ve stated a new campaign with my regular group. Although I won’t have time to do up a full narrative write-up, I’ll try to post periodic reports with pictures. 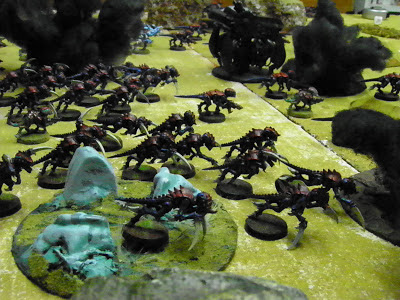 This is a scifi combination RPG and tabletop game about a platoon of US Marines in a war against an implacable alien enemy in the year 2302. The setting is that of the old GDW hard science RPG Traveller 2300 or, as later editions called it, 2300 A.D. We’ve actually been running this campaign off and on since about 1990. Wikipedia has a pretty good description of the setting:

For this round of the campaign, I’ve changed from the old GDW rules and gone with Combat: Alien War, a set of tabletop scifi skirmish rules written by Howard Whitehouse and derived from Astounding Tales! which is our go-to rules set.

As you can see from the photos, I’ve used quite a bit of Warhammer 40K and AT-43 figures and vehicles. One reason for this is that there are no suitable 28mm figures for the Kafers, who are biped carapaced aliens, so the Genestealer figures were a close substitute. Most of the Marines were old Grenadier and Coppelstone figures and the AT-43 figures fit in with them OK. But the main reason for this is economic. I picked up a very sizeable amount of AT-43 stuff that went on sale when that game hit the skids and my local game store had a flea market a few years back where I was able to pick the WH40K models, assembled and painted no less, for quite a bargain.

My apologies to any WH40K purists out there who are offended. Think of it as being like Firefly using old Starship Trooper armor for the Alliance troops.

The story so far: 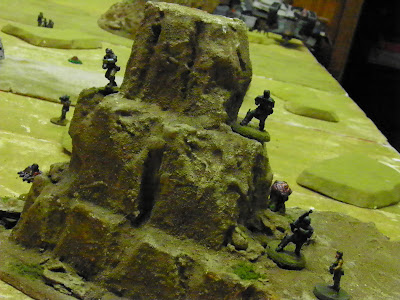 A divided humanity has been fighting against the alien Kafers for seven years now, mostly in the Eta Bootis system at the end of the French Arm (“Stutterwarp” lightspeed travel technology in 2300AD is limited to jumps of 7.7 light years so human settlement is limited to systems that are no greater than that distance apart. This has formed three “arms” of settlement emanating from Earth, the American, Chinese, and French arms.)

Early in 2301, the Kafers launched a massive invasion to finally conquer the humans.

The Kafers are a unique alien species. Very powerful creatures, they tend to be of very low intelligence but undergo a rapid and profound increase in intelligence when under stress, a sort of adrenalin reaction. This means they desire and seek violence and conflict as a means of increasing awareness.

The Kafer invasion has proven generally successful despite fierce human resistance. It is now early 2302 and the humans have just lost a desperate months-long battle on planet Kimanjano. Although there are several human space squadrons scattered through the Arm, the main human reserve fleet is preparing for a last stand at Queen Alice’s Star. The Kafer battle fleet is regrouping at Kimanjano and will soon begin the final drive towards Earth.

The human alliance has come up with a plan, Operation Briar Patch, to launch a sudden large raid on the major Kafer supply and repair facility on the occupied planet Dunkelheim in the DM +36 2393 system. Intelligence from the human resistance reports that the only ships in the system are a few heavily damaged battleships and the ground garrison has been stripped to provide troops for the Kimanjano fight. As there are over 1 million human colonists on Dunkelheim (mostly German and Texan) living in close proximity to the Kafer facilities, bombardment from space is not an option.

A small task force of a few missile cruisers and assault transports will make the jump to Dunkelheim using lesser star lanes and land a ground force to smash the Kafer facilities there. The raiding force is built around the American 7th Marine Interface Brigade. It is estimated that, if surprise is achieved, the raiders should have 1 to 2 Earth weeks to complete the destruction before substantial Kafer reinforcements could be brought against them. 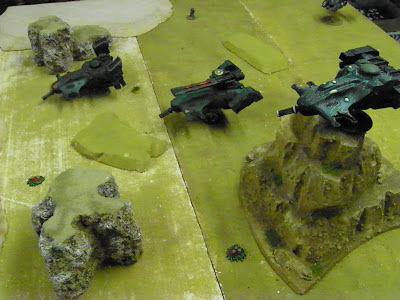 Most of the player characters are members of that force. These include:

1st LT H. Lejeune Boomer, platoon leader, 3rd Platoon, Bravo Company, 97th Marine Expeditionary Unit, 7th MIB, the younger son of a storied Marine family. He has only been in the field for about a year but is a seasoned veteran from the battles on Kimanjano where he lost most of his platoon.

S/SGT Aleron, leader of 1st Squad, 3rd Platoon, has been fighting Kafers for the entire war, having taken part in the initial fight with the Kafers at Arcturus Station. He is from the heavy gravity mining world of King and is heavily genetically modified like all residents of that hellish world.

CPL Larissa Cusmano, fireteam leader, 1st Squad, 3rd Platoon, veteran of three combat tours, she is a highly respected leader. She once killed a Kafer with a hairdryer.

PFC Gaylord Lapetre, driver and marksman, 1st Squad. A resident of Old New New Orleans (the Big Easy has suffered repeated devastations over the centuries from hurricanes, fires, radiations, and overly-successful Mardi Gras resulting in the city simply being rebuilt several times over the rubble. Unfortunately, the lower levels were often still inhabited.) He is a former shoe-salesman who much prefers his current line of work.

PVT Arben Johnstone, asst’ gunner, 1st squad, “The Noob.” Fresh out of AIT as part of the replacements for the decimated 3rd Platoon, this is his first combat operation. He can make tasty soup from almost anything. He snores badly.

The Task Force 97 was able to make the several jumps necessary to get to Dunkelheim undetected. The four Cruisers of the escort managed to destroy the four damaged Kafer battleships but three of the Cruisers were heavily damaged, with one being required to return to human space. Nonetheless, the landing of the 7th Brigade commenced.

3rd Platoon landed in three Hammerhead Armored Planetary Interface Vehicles (APIV). Awaiting them was a small group of resistance fighters, led by another PC, LT. Jutta Zweig, a former Colonial Policewoman, who operated a landing beacon to guide them in. 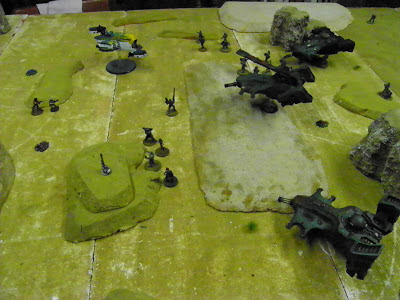 Lt. Boomer managed to guide the platoon down to the designated landing zones, avoiding most anti-aircraft fire. Unfortunately, he smashed his own APIV on an outcrop, reducing it to half speed.

The Platoon quickly took up positions without opposition. Landings by the rest of the Brigade proceeded of pace. However, it was soon discovered that the platoon's water reserve had been destroyed in the landing and 2nd Squad was sent back to Battalion headquarters in the damaged APIV to fetch more.

Shortly thereafter, a Kafer reconnaissance aircraft wandered over their position and began an ineffectual fire. The Kafer pilots proved to be amongst the dimmest (In game terms, to simulate the changing nature of Kafer intelligence, most Kafers start as green troops but once under fire, would roll against their combat value, and if successful, would become rated as veterans, with the chance increased by each shot placed against them.) Despite several strikes on their vehicle, including one that knocked out their communications, the Kafer pilots remained only vaguely aware of the danger they were until there vehicle was destroyed by a combination of railgun and missile fire, crashing landing within 3rd Platoon lines. 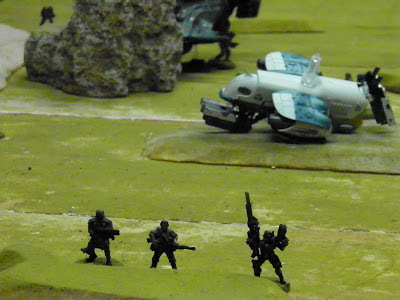 When our heroes went to investigate it, the Noob managed to step into a kamelinsekt (the primary native species is a termite-like insect that lives in burrowing colonies of enormous size.) Then the LT nearly got himself skewered by the one surviving Kafer pilot who, after the crash, was only too aware of its predicament. Missing its one chance, the Kafer was ignominiously gunned down.

Word soon came that the main Kafer field force, garrisoned in the planetary capital of Goldberg about 20 kilometers away, was moving against the landing zone. 3rd Platoon and rest of Bravo Company could expect a full assault in less than an hour.

The Platoon dug in just in time. 1st squad, one fireteam from second squad, and the German resistance fighters formed the perimeter. The remaining fireteam, the heavy weapons squad and the platoon command would form the reserve.

Not having received accurate information about the Marines’ position from their hapless recon flight, the Kafer stumbled into 3rd Platoon’s position. It was here the 3rd Platoon’s luck began to run hot. The LT was able to contact higher echelon and get the support of a section of the Brigade’s heavy artillery. Added to this was fire from the railgun mounted on 1st Squad’s APIV and the platoon mortar. All of this blasted into a target rich environment. 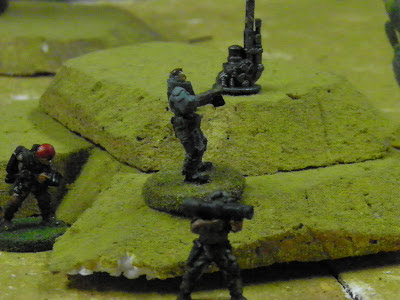 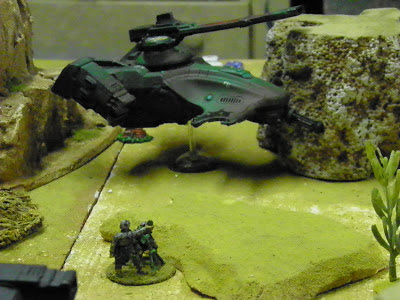 As the Marines dealt with the conventional infantry attack, suddenly a horde of strange creatures rushed forward. These were a new subspecies of Kafer, bearing no weapons but having nasty clawed and bladed limbs, they moved far faster than the normally sluggish Kafers. A huge mob reached the bottom of cliffs where the resistance fighters had dug in. Here was where our heroes luck again kicked in. These Kafer “eviscerators” received a mistaken order to fall back just as they reached the human line. (In game terms, on my initiative roll, I receive a WTF result that directed one of my units to be retreated. The players got to choose which one and chose to retreat the eviscerator unit.)

While this was going on, the 1st squad main position, consisting of SGT Korand, Machine-Gun Lenny, the squad support weapon operator, and the Noob, were laying down some very effective fire. The Noob in particular beating the odds (he needed to roll a 2 or less on a 6 sided dice)and killing several Kafers, including a couple of Kafer leaders. 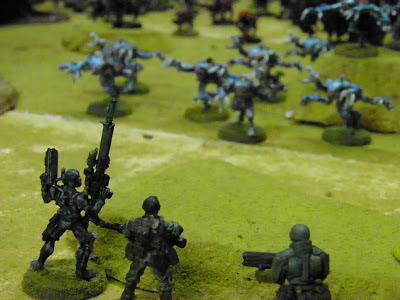 It was then that Lenny was hit by a round from a Kafer thud gun. While SGT Korand worked to save the Marine’s life, the Noob opened fire on the Kafers, killing the Kafer “company” commander who had directed the fire that wounded Lenny.

At was at this point that the Kafer infantry attack turned out to be a ruse to uncover the main line of human resistance. Two large Kafer “Death Sled” hover tanks, bearing large main guns and lasers, appeared and were set to roll right over 3rd Platoon.

Here again 3rd Platoon’s luck came into play. While the Death Sleds’ fire mostly missed, one sled was immobilized by Lepetre’s rail gun fire. The other sled was hit by an RPG fired by one of the resistance fighters and then suffered a hit from the Noob who grabbed SGT Korand’s plasma rifle and fired it point blank at the sled’s weakly armored undercarriage. The plasma blast penetrated and knocked out the main armament. 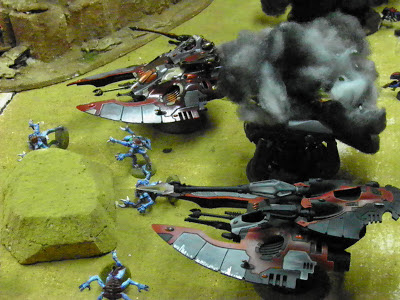 The hover tanks’ lackluster performance did mask the few remaining Kafer infantry and eviscerators. These leapt onto the cliff where Jutta and her men were dug in. The humans proved to be no match for the half dozen eviscerators who overran the position, killing most of the troops there and severely wounding Jutta. 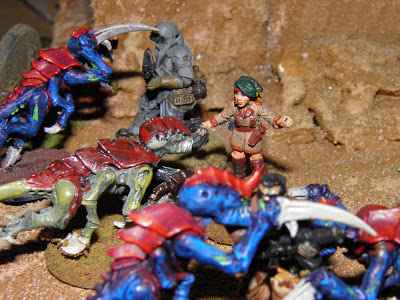 Likewise, one eviscerator had crept close to the Noob’s position. It struck out at the kid and managed to slice him up before falling to the Noob’s close range plasma bolt. 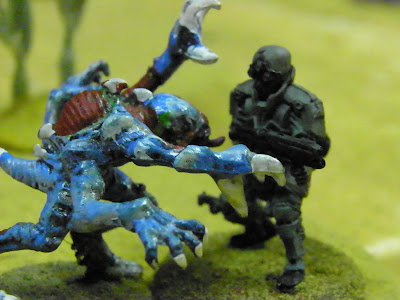 At this point, the remaining Death Sled exploded as a strange heavily armored ground vehicle appeared over the horizon and fired a heavy laser into the damaged alien craft. The remaining Kafers began to fall back. 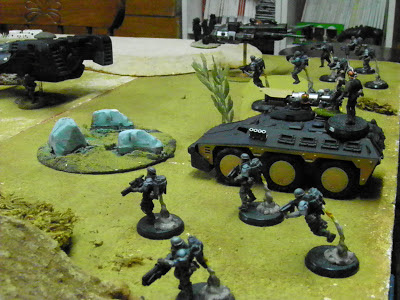 Despite approaching from the Battalion landing zone, the newcomer was not a Marine vehicle. On its hull was the logo of the Uranus Corporation.