I plan on running the All's Quiet on the Ruritanian Front game at Historicon. I decided to give the Americans a little more support. I've always liked the interwar concept Tumbleweed or Ball Tank: 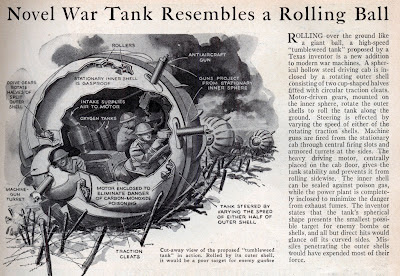 RAFM just produced a version of the Tumbleweed Tank 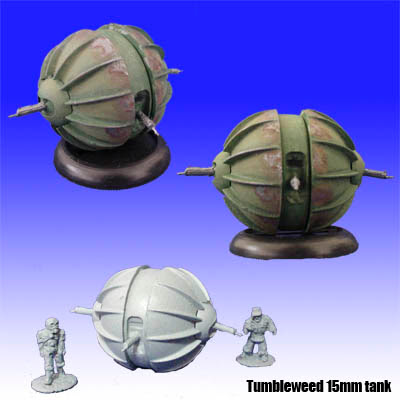 Unfortunately, it's only in 15mm and I game exclusively in 28mm. So I decided to build my own. Here's my attempt: 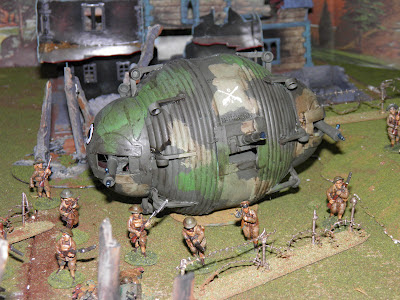 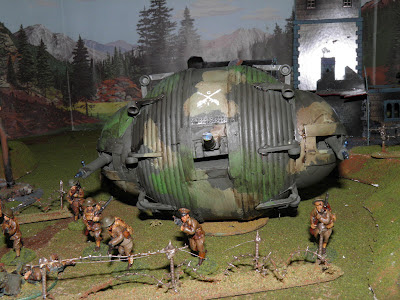 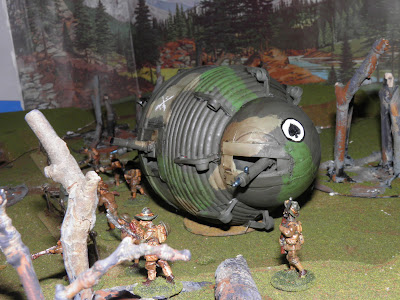 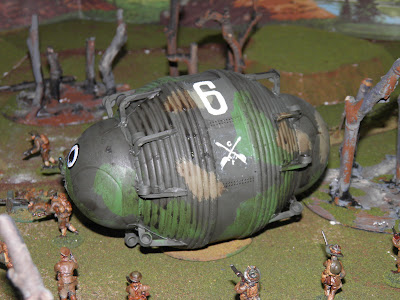 It's made out of a toilet bowl float (never used!) and a couple of dome-shaped tops from Bionicle containers. The machine guns and tank gun are from old plastic toys and attached bits of sprue as the dirt-grippers. My son did the markings free-hand.
Posted by bogdanwaz at 5:33 PM 2 comments: 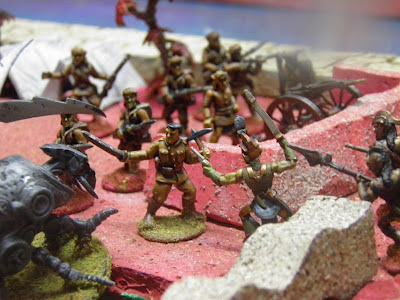 I did a set-up for VSF game I plan on running at Historicon (in addition to a replay of the Goodbye to Guns game). It will be using the Battles by GASLIGHT rules with some modifications. It'll be called "The Conqueror Worm" and will be set in the Space 1889 universe but will be primarily Martian v. Martian, as a sort of VSF version of the Taiping Rebellion. The idea is that the Tossian Empire, the last strong Martian state suffers from a rebellion by the Worm Cult, death-worshipping fanatics out to destroy all civilation on Mars. The empire can't cope with the uprising by itself and so turns to the Earthmen for help. This help takes two forms. One is the New Model Martian Army, commanded by Charles Chinese Gordon, lead by tough British NCOs and equipped with modern weapons. The other is a force of Earthmen militia from American enclave at Tossian city of Thymiamata, led by a suprisingly buoyant William Shafter. Also aiding them are the tribes of green Tharks, led by the transient Earther, Crown Prince Ruprikt of Ruritania. 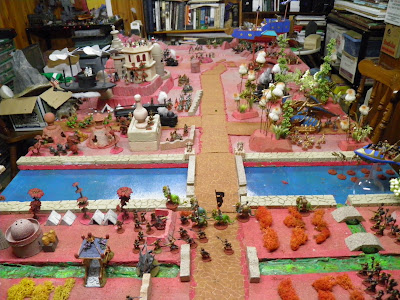 This is the table set-up. The Rebels are on the right side of the board, launching a surprise dawn attack on the Imperial camps that are around the Springs of Barsaish. 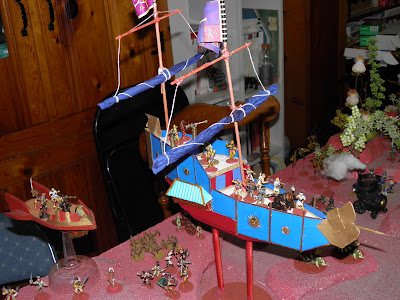 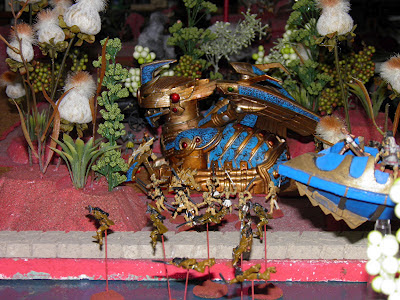 Cultists and flying High Martians advance up the canal. 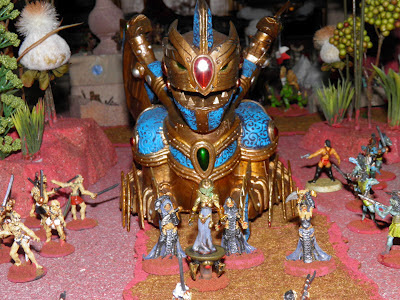 The ancient artifact, the Conqueror Worm, guided by the cultist priestesses, The Brides of Death. 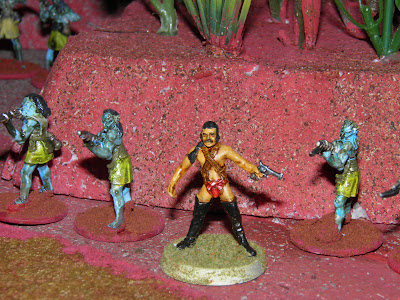 Rebel leader, a Fenian renegade known to the Martians as "Kona'ari" 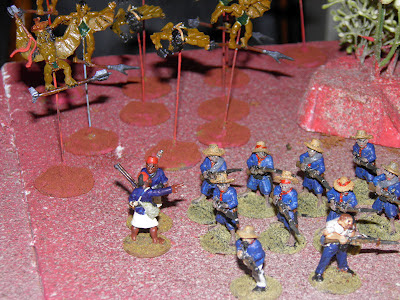 The Belgians in the nearby Coprates Valley support the Rebels in hopes of undermining the Empire. They've even imported a unit of Congo cannibals. 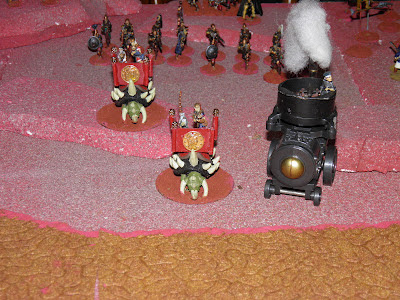 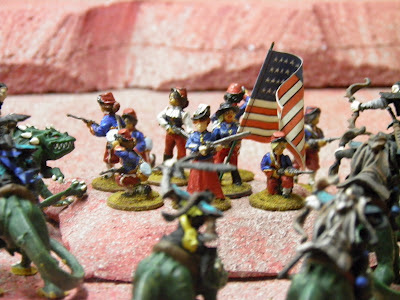 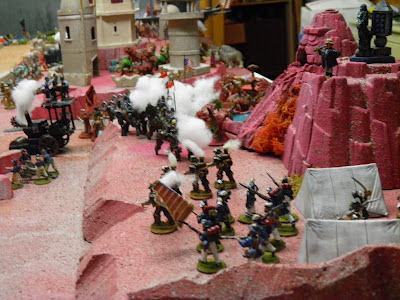 The American troops rush to form the line. 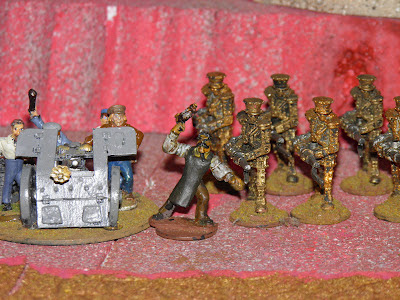 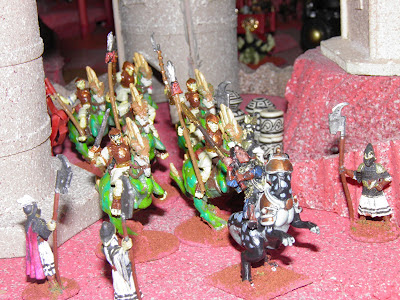 The Emperor Krahaanik rides out to lead the counter-attack. 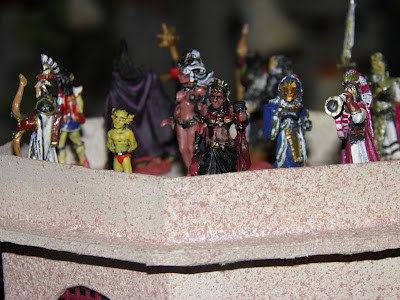 The Empress and her children watch in trepidation. 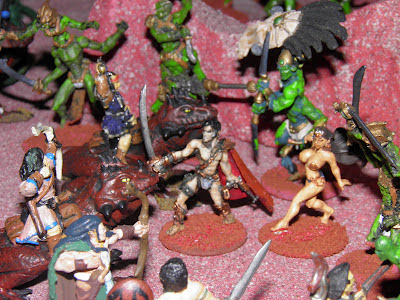 Prince Ruprikt and his "traveling companion" Gigi lead the Tharks in a flank attack against the Rebel Hill Martians. 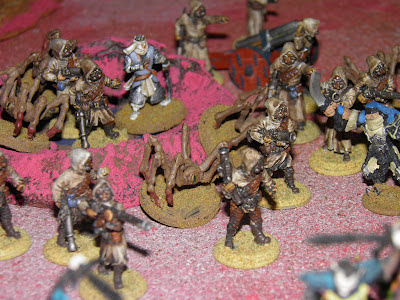 The enigmatic Sand Martians emerge to aid the Rebels for their own unknown purpose. 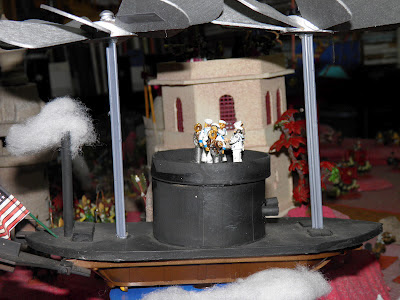 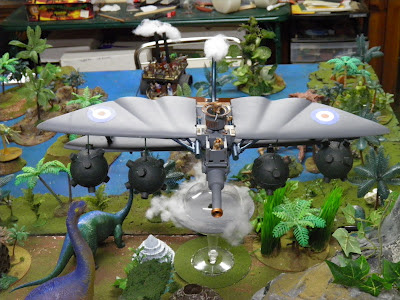 Here's a new flyer I put together for VSF games. It's made from old toy parts, mostly from a couple of Wild Wild West toys, a flying penny farthing I think. The mines are just styrofoam balls with wood nubs glued on. 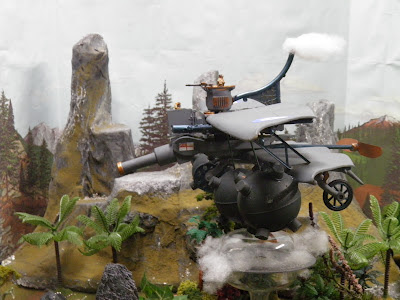 I'm planning on running the "Goodbye to Guns" Wierd World War I game at Historicon and may add this as a reinforcement to the Allied air offensive. 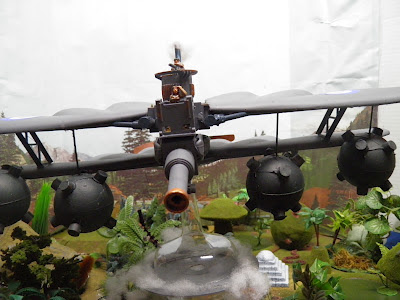 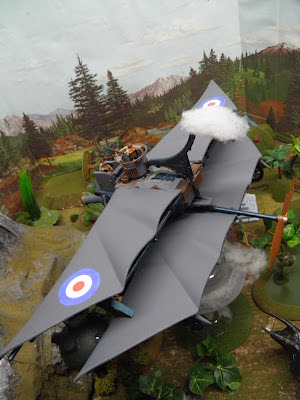