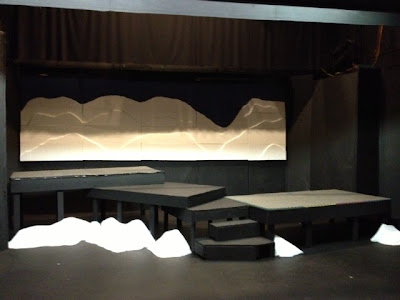 I haven't had much time for gaming since Historicon so this post isn't really about gaming per se. Rather, it's about an overlap between gaming and my other hobby, community theater. I recently used some miniature scenery building techniques to build scenery for a show I am in.

My kids have been involved in school theater for years now and I've helped out with scenery building on occasion, despite a complete lack of carpentry skills. Over the last couple of years, I gotten involved in acting myself, which in community theater means also helping with other aspects of production, including set building.

The show I am in now, a romantic comedy called Almost, Maine by John Cariani, takes place on a single winter night in a small town in northern Maine. The scenes all involve the interaction of people watching the northern lights. It’s done in the style of “magic realism” so some of the scenes contain somewhat surreal elements and the set is intended to be very stylized.

The problem was how to have a simple set where the northern lights could be prominently on display when you have an almost non-existent budget. At this point, the redoubtable but now sadly moribund Major General Tremorden Rederring Colonial Wargaming website came to the rescue. I recalled the instructions on how to create stylized mountain flats from this page: 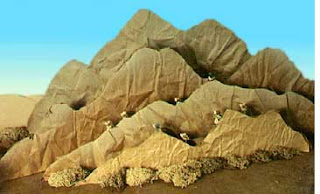 (Thankfully, that entire wonderful website is preserved on web.archive.org.)

We expanded it to create a slightly three dimensional back drop for the stage as well as creating snow piles scattered around stage. We used about 8 packs of the beaded foam insulation panels and some white batting. I used my heavy-duty Styrofoam cutter and my hot glue gun and went to town. 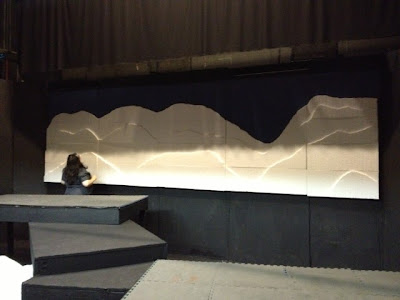 After I explained where I got the idea, the rest of the cast started calling the scenery, "Bigatures." 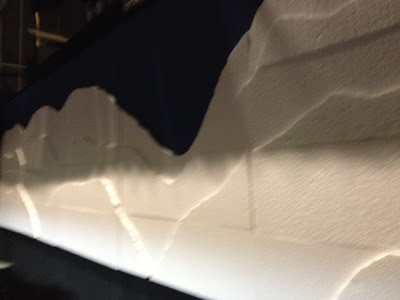 The whole thing cost less than $100 and I think it looks pretty good, if I do say so myself. It also works great for reflecting the northern lights effect that is really crucial to the plot.