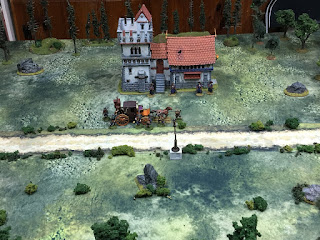 Haltmire, the very last fortress before the eastern borders of the Soutlands give over to the Ichormeer; built originally as a bastion, dormitory and storehouse for the engineers and laborers attempting the enormous work of building a road through the dread swamp. Not as large as Winstermill or the Wight, yet it is mighty enough to provide a permanent foothold in the isolated and threatened lands—with a reputation similar to the manse’s for impregnability. Stationed there is the Warden-General, who has secondary command of the “ignoble end of the road,” and is the highest ranking officer of the lamplighters on the road itself, topped only by the Lamplighter-Marshal. Like every other cothouse on the Wormway, Haltmire is undermanned…There was once a fulgar employed there who was lost in the Ichormeer protecting the wife of the Warden-General as she desperately searched for their young children gone missing in that wretched place. The lighters of Wormstool and Bleakhall joined a greater and near futile search for the wife and daughters in which Haltmire’s scourge was also lost and many lighters and auxiliaries barely returned with their lives...
-Lamplighter 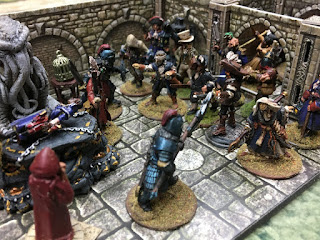 The party was shocked to discover that what they thought would be the safe haven of Haltmire proved to be nest of fictlers, worshippers in the cult of Sucoth the Swallower of Men.  The grief of the Warden General at the losing of his family in the Ichomeer addled the poor man's mind and made him susceptible to the blandishments of these cultists who promised a world cleansed of evil. 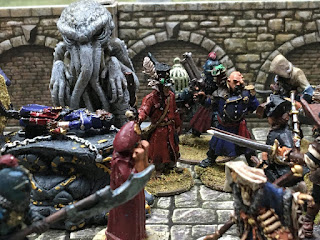 They were preparing to sacrifice Sister Perfidia, the harsh Soratche calendar whose wrath they had experienced in more settled regions.  The party also realized that the mysterious reddleman who had dogged their steps so many times was present.  He stepped forward and spoke soothingly in an effort to convince them to join with the cultists.  He was cut short by Fransalir, seconded by Badger and Lord Danny, who opined that the cultists were conducting the sacrifice incorrectly and would incur the wrath of Succoth.  The fast talk of the three confused the unstable mind of the Warden General who believed they had been sent by the Dark God itself.  Knowing the party's capabilities and sensing a disaster looming, the reddleman beat a hasty retreat and rushed from the fortress. 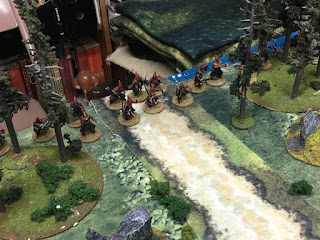 From a narrow window in the Great Hall, Danny perceived that the reddleman was rushing toward the approaching horde of cultist whom the party had so recently escaped.  There were more than a hundred of the angry cultists rapidly approaching the bastion.  No doubt the reddleman hoped to direct them against the party. 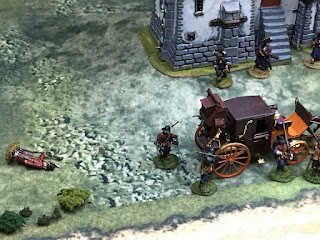 Lord Danny pursued the reddleman and launched a scathing wit attack on the man who dropped near the side of the road. 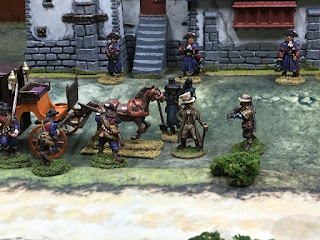 Accural had followed, and picking up the dissatisfaction among the surviving lamplighters, convinced their sergeant, one Marius Tuffnutte, to escape with them from this madhouse. 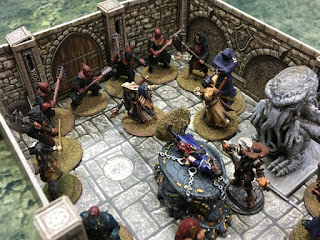 In the meantime, having duped the Warden General into obeying the party's commands, Alhambra approached the alter, intent on freeing Sister Perfidia.  Sister Angella proved equally adept at this deception.  She convinced the majority of the cultists that the ritual necessitated forming a line with hands held.  She directed  Prince Avi and Tanga to join each end of this line.  At the appropriate moment, the three fulgars would send a ferocious electric charge through the line, hopefully incapacitating the mob of fictlers. 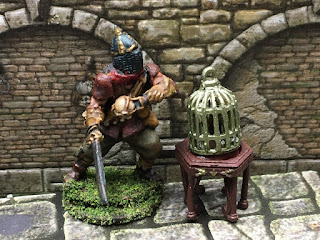 Frensalir had noticed a bird cage near the alter in which a mournful sparrow was kept captive, no doubt intended as a sacrifice in defiance of the Sparrow Lord who opposed all false gods.  He quickly released the bird with a plea for help to its master. 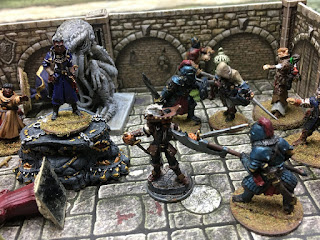 Seeing the mob of cultists nearing the clearing in which Haltmire stood, the party launched their attack.  The fulgars' attack proved even more deadly then anticipated, the whole mob dropped dead in a thundering crash.  Alhambra struck at Perfidia's bonds.  The Sagaar then lithely joined Ottimo who was engaged with the two heavily armed and proofed troubadiers.  Within moment the two large warriors fell to the flashing blades of the two adepts. Badger and Tanga took the Warden General captive. 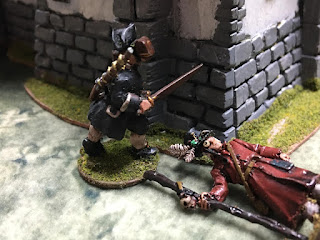 Danny unchivalrously dispatched to troublesome reddleman before the latter could awakend 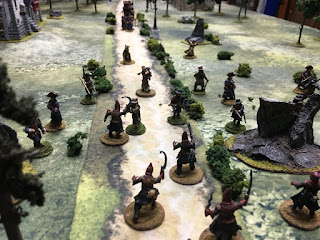 The lamplighters, under Accural's direction engaged the approaching cultists. 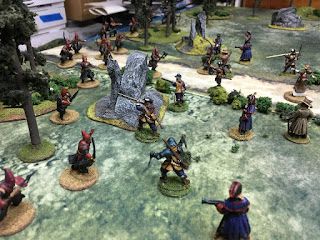 The skill of the trained soldiers drove the cultists back for the moment, allowing the party and the lamplighters to make their escape. 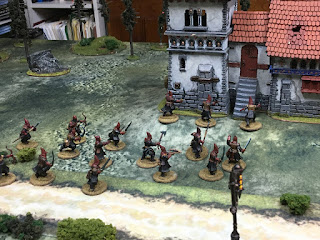 They soon returned.  Ignoring the rag-tag party fleeing the fortress, the cultists streamed in, no doubt hoping to complete the sacrifice that would bring their god to awareness and destruction to the world. 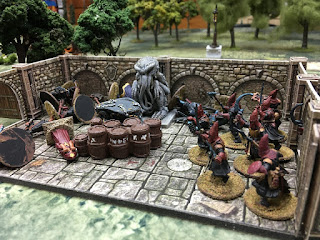 However, the cultists discovered that Lorent and Fransalir had prepared for this eventuality by placing several barrels of gunpowder strategically about the lower levels of the castle. 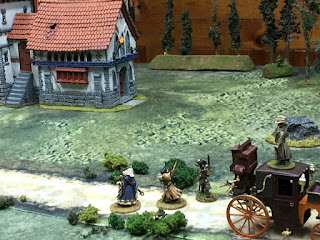 As they left, the three fulgars brought down one last bolt of lightening through the open door to the great hall. 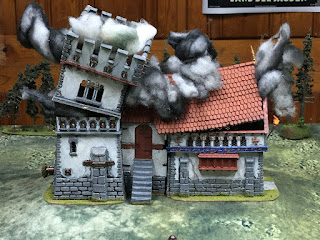 Haltmire would be in need of repairs. 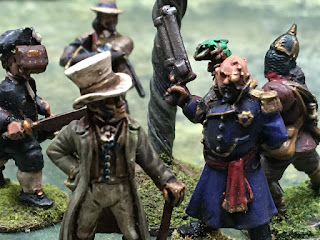 As evening fell, they camped and Accural questioned the Warden General who seemed to be enjoying a moment of lucidity.  The Warden General admonished them, saying that they had the same goal, putting a stop to the evil being undertaken by Doctor Corvinus in the depths of the Ichomeer. 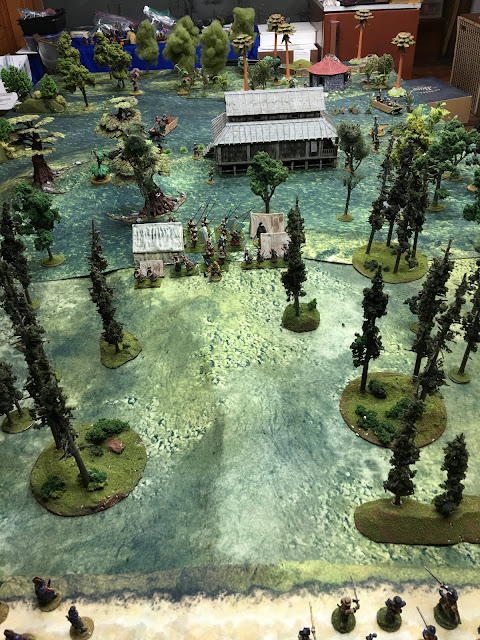 Lamplighter scouts had found the location of the black habilist's  encampment. It lay on the shores of one of the many streams found in the swamp.  A causeway joined the camp to the Wormway.  It was guarded by a battalion of Heilgolundian mercenaries and several lazhars.   The Warden General had intended to launch a frontal attack with the cultists to distract the hired warriors while his men used the boats of a nearby fisher's cabin to approach by water.  "But you spoiled everything with your self-righteous arrogance," the Warden railed.  "We could have been allies in this, after all, you are not much different from us, you use the knowledge of the Old Gods!"

When the party protested, the Warden returned, "How do you think man learned to make lazhars, to grow strange organs from the miasma, to add these new organs to the living, making commonplace powers no mortal ever conceived...." 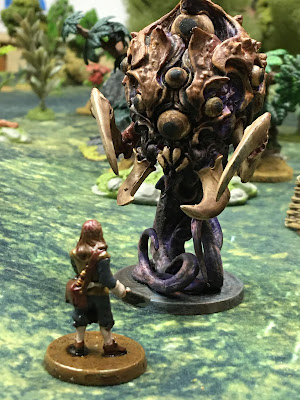 ...Why these secrets were whispered into the ears of the black habilists over the centuries, whispered by Lobe, messenger of the Old Gods, servant of mighty Succoth, dread be his wrath!"