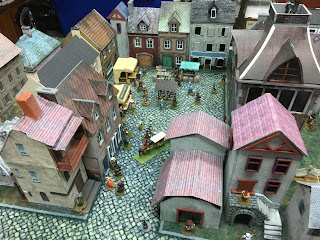 Koron's Preservant: a script used almost exclusively by corsers and ashmongers to preserved the bodies of the deceased while maintaining the bodies' viability in various black habilist operations during the often-lengthy journeys to their ultimate destinations.  Although it does not completely preserve the subject bodies, it does greatly slow the process of putrification. 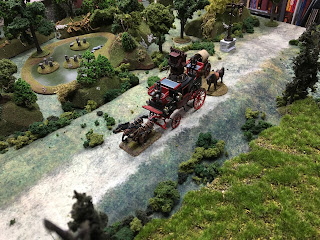 The day following Valentine Portent's obsequies and the apprehension of Corser Frangelin, the party set off on the return to Brandenbrass.  During this two-day journey, the sleuth Accural was able to discover more about his new companions.

Sister Angella was young caladine of the Right of the Wayward Road, an order of iternant calendars who wander the byways of the Empire seeking to aid the less fortunate in any way possible.  Although beloved by poor, the order is not highly regarded in governmental circles as interfering do-gooders, an opinion not helped by the order's lack of aristocratic patrons.  Angella was younger than he original thought, having only recently set out on her first solo "hitherwalk," as the caladines' peregrinations were called, and having undertaken the aid of the Widow Portent as her first act as an independent caladine.

Of the three comrades of the later peltryman, the soft-spoken Lorent the benign dispensurist was the most mysterious, saying little about his background.  "Jarl" Fransalir Thorson belied his Easterner barbaric appearance by indicating that he was at present an academe of habilistics at the University of Worms.  Lord Danube's reputation as one of the most feared precursors in Brandenbrass was well-known to Accural.
The most surprising element of their story was that they had survived the Battle of the Vab with their body and senses intact. Accural and Angella were profoundly shocked by the three's assertion that they had witnessed the armies of the Lausid closely cooperate with a house of

They were also able to extract from Frangelin, who was much chastened by his encounter with the Widow Portent, a great many secrets of the fraternity of corsers.  This included the fact that he had used Koron's Presevent to ensure that the body of Albany Reeves arrived intact at its ultimate destination.  He also related that there had been a greater than usual demand for bodies of late, some requesting very specific attributes and others more general.  He had mainly supplied these to the notorious ashmonger king, Octavian Scollfyld.  Scollfyld operated his net of dark trading out of an old Great House in Moldwort Court in the neighborhood of Slatterly Beam, deep within the Alcoves of Brandenbrass.  The party agreed that this should be the first area of investigation. 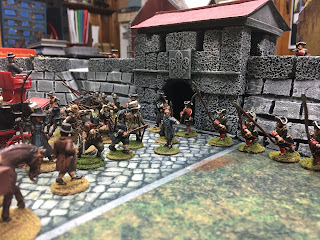 Upon arrival in Brandenbrass, they found the city gates more heavily guarded than usual.  The presence of Lord Danube eased their entrance.  They subsequently learned that the city was on edge due to a virtual war having been fought between the Branden Rose, and Pater Maupin, who dominated the illegal rousing pits within the city.  It was said that the fearsome belle dame had destroyed Maupin's entire enterprise in one night.  Of the whereabouts of both Europe and Maupin were unknown but it was said that the Archduke was furious over the affair.  All of which, combined with the fall of Winstermill and the continuing failure to recapture it, left the city in state of great agitation. 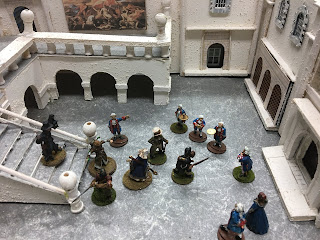 Fortunately, the party had a refuge in Lord Danube's small townhouse on Cannon Street in which to rest from their travels before plunging into the search for Albany's body. 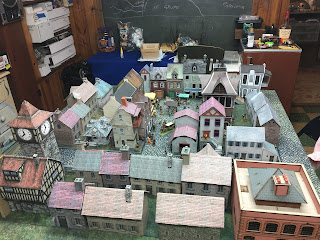 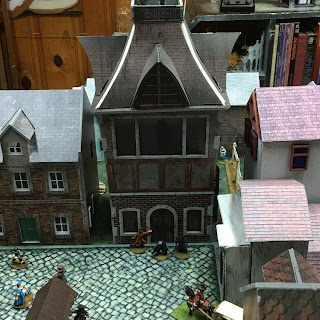 The residence of one Octavian Scollfyld, the former Great House of some aristocratic family when this part of the city knew better times. 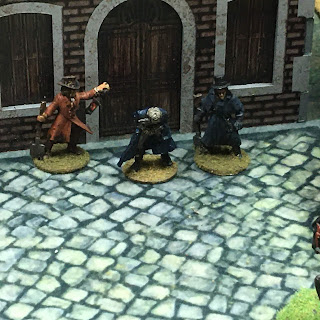 A group of spurns guarded the single entrance to well protected house, one wearing a wig to hide this fact of being a Wit. Frangelin went in to determine if the demand for corpses continued or if it had been snuffed out with the rousing pit business. 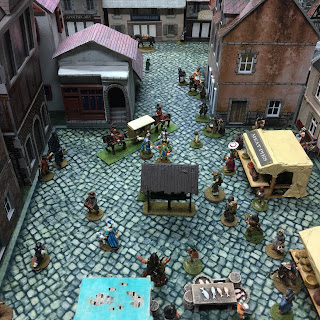 The party entered the busy square, splitting up in order to avoid attracting attention, Accural wishing them to be discrete.  Upon first arrival, Accural was surprised notice that one of the many vendors in the square was a reddleman, the same one they had encounter during the obsequies in Useless.  He was even more surprised that the man bore the mark of the false-god cult of the Seven Seven on his hand.  The reddleman, seeing himself notice set off quickly and Accural was loathe to follow, fearing to be distracted from the main investigation.

They soon noticed a sedan chair depositing three swells at another house a few doors from that of Scollfyld. 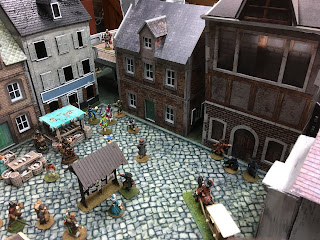 These three were obviously still on a carouse from the previous evening.  Angella stealthily approached them, eavesdropping on their less than discrete conversation. 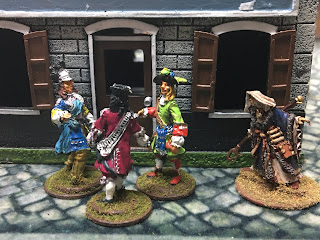 It was clear that they believed this house to be one of Maupin's satellite rousing pits and hoped it was still in operation.  The building appeared to have been recently boarded up and the three turned to leave. 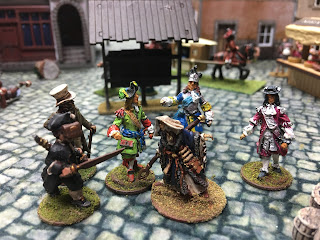 Angella rashly accosted the trio, seeking to determine if they knew of the use of reanimated corpses, revermen, in the rousing pit they had attempted to visit.  A fight nearly broke out but the situation was calmed by Lord Danube. 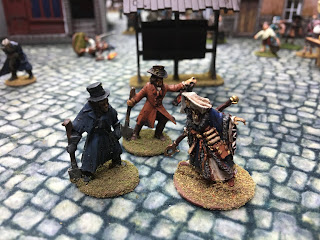 But the encounter had not gone unnoticed, a couple of Scollfyld's spurns tried to intimidate the young caladine.  The result was fearsome brawl. 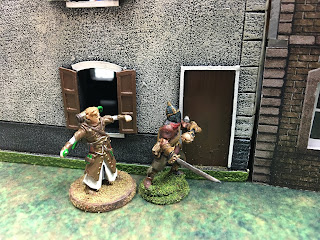 While the fight erupted in the square, Fransalir and Lorent went to the rear of the house that the three swells had tried to visit.  Entering through a rear entrance, the pair discovered evidence of a violent attack, no doubt part of the Branden Rose's assault on Maupin's empire. 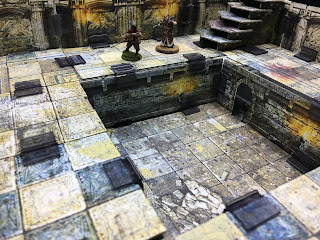 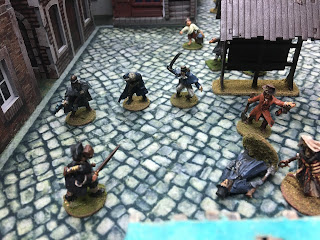 Back in the square itself, more of Scollfyld's spurns, led by the Wit entered the fray. 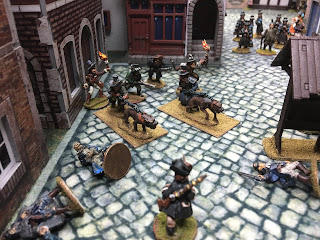 When Danube out-witted the Wit, more of Scollfyld's spurns attacked, this time with fearsome fighting tykehounds. 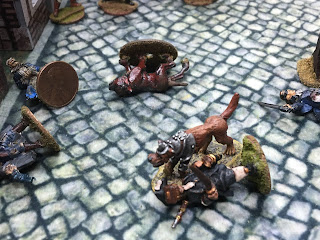 Although he ultimately prevailed, Lord Danny was severely wounded by one the hounds. 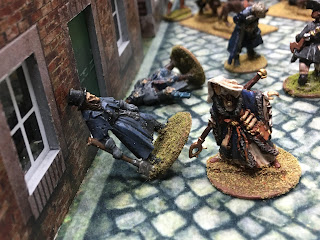 The spurns learn the power of a fulgar caladine. 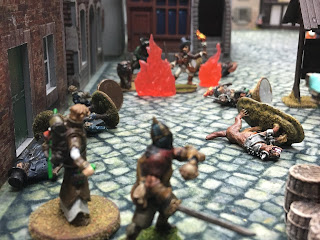 Fransalir and Lorent arrive in time to assist, their hurled potives causing much consternation and more among the spurns.  Fransalir's hurling of a water-filled casting vessel caused the redoubtable Wit to become more susceptible to Angella's thermistoring and the lightning strike she called down did the Wit in at last. 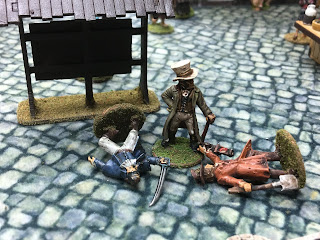 Throughout all of this, Accural, who was the least bellicose of the party, let opportunity be his guide.  Whenever Angella or Lord Danny or the two skolds knocked an adversary off their feet, the sleuth was there to strike with his heavy walking stick. 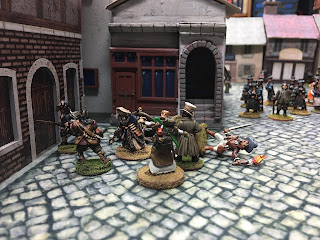 Finally, the sole remaining spurn fled to the doors of Scollfyld's hold.  Noting that Frangelin had been within for a very long time, Accural urged the rest of the party to rush the building.  As they battered against the doors, they heard the distinct sound of the constabularies' whistles.

So many fantastic scenes!