On its way to the River Maragille, the party crosses through what had once been a densely settled region of the city. 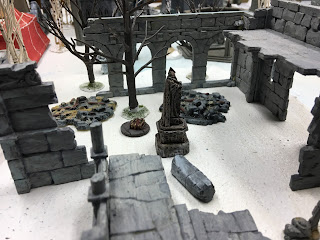 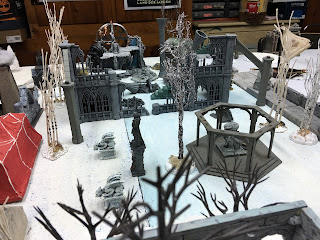 The newcomers to the party are surprised when An'var summons an animal companion, a large brown bear that he calls "Greg" to join them. 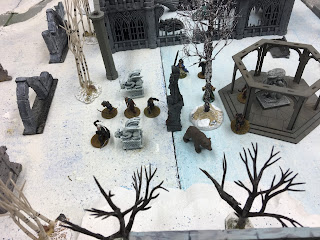 Ril soon realizes that they are being followed 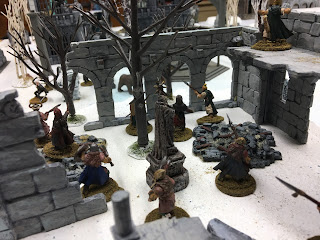 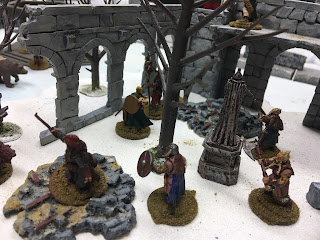 A band of Gudlub tribesmen lead by an Elementalist shaman are seeking vengence. Realizing they have been spotted by the party, two barbarian archers open fire while several of their companions charge the party. 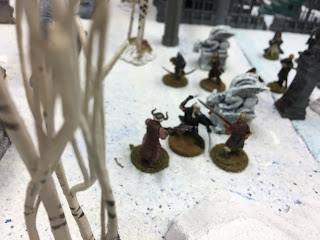 Ril holds off the attackers while Bozydar forms a firing line with the rest of warriors.  The barbarian archers are eliminated. Fierce hand-to-hand fighting ensues. 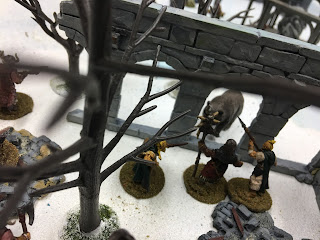 An'var causes Greg the Bear to be possessed by a demon and the now-horrific creature charges to the attack. 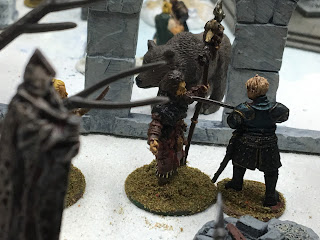 This gives Dame Roswith the chance to attack from the flank, killing the shaman with one ferocious blow. 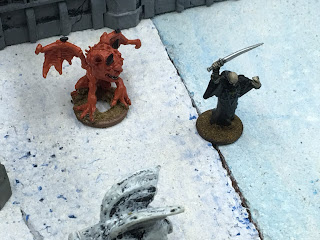 The shaman's death comes at an opportune time since he had just summoned a demon behind An'var which, however, is quickly dispatched.

The sole surviving barbarian is taken captive.  An'var frees him in order for the tribesman to take an offer of peace to his chieftain.  Given that this is the third Gudlub band that has been bested by An'var, the captive is happy to take the offer back to his tribe.

The party soon arrives at the shore of the frozen river. 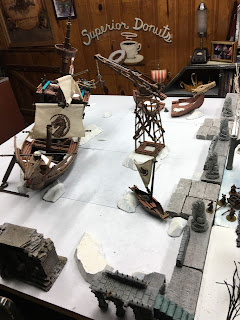 Posted by bogdanwaz at 4:57 AM No comments: 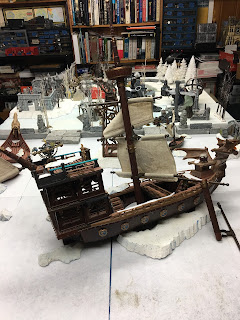 Our group has been playing Frostgrave for a while now.  We recently starting something a little different; using Frostgrave for an RPG campaign, both as the setting and as the rules.   All of the players  are part of a single warband, albeit not a standard one per the rules.

I've decided to set it in the world of Minaria, a great fantasy setting from TSR's classic boardgame Divine Right (I never understood why they never made it into an official DandD setting) 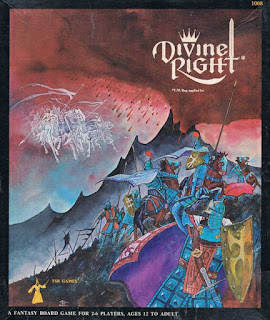 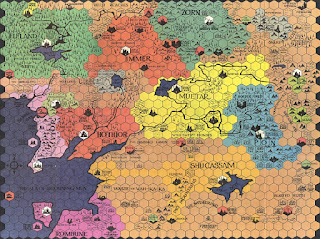 I took an existing warband that we had been playing regular Frostgrave games and gave more detailed backgrounds.  Two of the players had already been playing as the Summoner and his apprentice.  I added another player who had previously run an Illusionist warband as a third magic user, with a background about the destruction of his warband that set up the adventure.  The other players took up as new, non-magic user members of the Summoner's warband.  I initially gave them some of the skills from the Captain rules but shortly after the first game session, I picked up Ghost Archipelago and decided to give all the none magic-users Heritor skills.  This put them more on par with the magic-users in terms of special abilities to play with.  I used the justification that their time in the magic-laden atmosphere of Felstad had awoken these latent powers.

All this makes the warband powerful and obviously couldn't be used in a regular Frostgrave/Ghost Archipelago game but I've tried to balance this by giving them harder opposition in the encounters.  I used Thaw of the Lich Lord as the basis for the campaign.

Here are the Player characters: 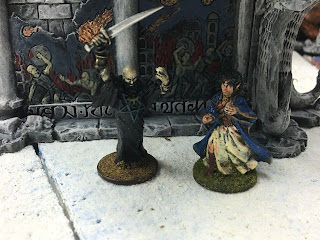 Rt Hon. Lord An'var Rhellig, Grof Aquillon of Lashuhag: As a younger son in one of the oldest noble families in the Empire of Meutar, he was raised to be a magic user.  Attending the Invisible School of Thaumaturgy, he became a summoner and was soon raised to the ranks of the magical researchers.  However, ambitious and somewhat arrogant, he was expelled from the school for failing to follow proper daemonological safe-guards and researching into areas of forbidden lore.  As word of the discovery of the great magical treasures in the ancient ruined Lloroi city of Felstad spread, he decided that this was the best way to pursue his work and so set off with his apprentice, Atlantia.  Gather a small band of treasure hunters, rangers, and thugs, he has exploring the ruins, quite successfully for some weeks now.   Dissatisfied with some of his minions, he has sent out word that he is willing to pay well for experienced warriors.

Atlantia: The daughter of wealthy Mivioran shipping merchant, she was disowned by her family for refusing to marry a much older associate of her father as part of financial deal.  She attempted to gain entry to the Invisible School but was refused because she had no sponsor.  She was taken on as an apprentice by An'var Rhellig after his expulsion.  A few weeks ago, she traveled with him to explore the dangerous ruins of Felstad. 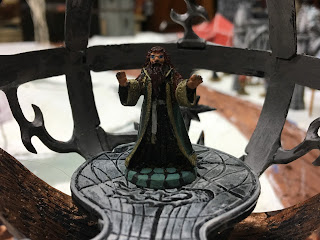 Redmaine the Magnificent: A fairly shady character, something of a con man, whose origins and background he keeps intentionally obscure.  Where he learned his Illusionist skills, no one is certain but it definitely was not the Invisible School.  He has been in Felstad for some time with varying amounts of success.  Recently, he met disaster while explore the ancient treasure galleons on the frozen River Maragille.  Here, his warband was wiped out and his apprentice, Thisbe, taken captive by a large force of gnoll tribesmen.   He has returned to the explorers' settlement at The Two Kings and hopes to gain aid in rescuing his apprentice. 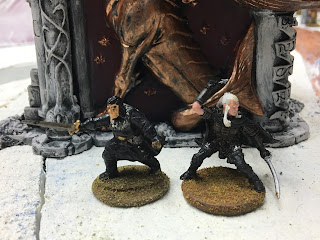 The Two Kings, one of the many boom town settlements on the outskirts of Feldstad, where vast amounts of trade is undertaken in the magics recovered from the ruined city as well as in providing services of all sorts to the adventurers.  The name comes from a pair of large statues of some unknown Lloroi dignitaries found in a ruined palace that has been converted into a tavern. 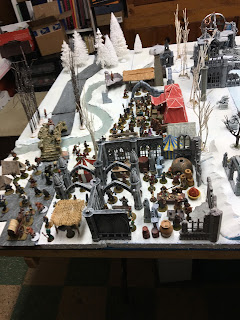 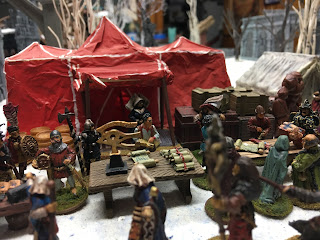 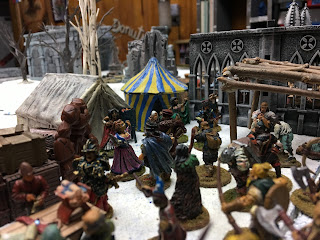 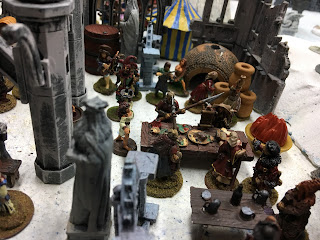 The settlement is well defended by local Conodra tribesmen, adept in surviving in this frozen environment, who had been hired by the mysterious proprietor of the Two Kings, known only as Sweetflower. 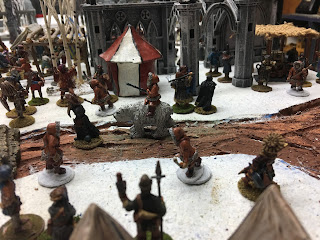 On the road into Two Kings, would-be adventurers gather seeking employment in the entourge of the exploring wizards.  Bozydar, Ril, Roswith, and Emerick are adventurers new to Felstad, seeking to join the warband of some reknown magic uses.  Bozydar suggests they seek out An'var Rhellig, who is said to be one of the more successful. 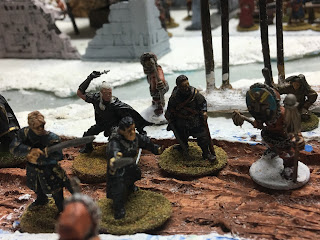 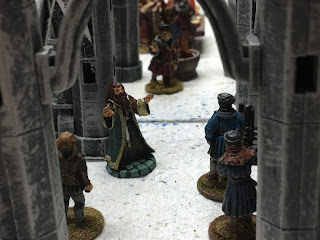 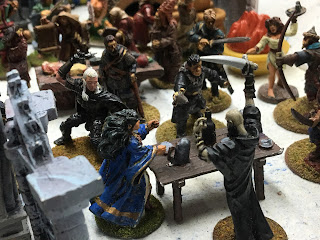 They meet the high-rolling yet arrogant An'varr Rhellig, a Summoner, with his apprentice Atlantia.  An'varr has had a number of successes, most recently against Gudlub tribe of barbarians.  Redmaine regales them with tales of the great riches to be found in the ships, including a navigational device that allows one to travel to different planes of existence.  After some rest and preparation, the party sets off into heart of the ruined city the next day.
Posted by bogdanwaz at 11:00 AM 1 comment: