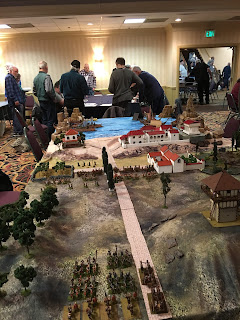 Attended Cold Wars 2017 with a unexpected pleasant surprise.  My son Nick's spring break plans fell through so he came to the convention with me and helped my run my game, "Caesar vs. Pluck: De Bello Ruritanico ad Mare."  This was something of a sequel to a similar game I ran a few conventions back.  It was based on Howard Whitehouse's Science vs. Pluck rules.  Science vs. Pluck is essentially a Victorian role-playing game where the players portray British army commanders in 19th century Sudan.  I modified the rules for ancient warfare with most of the players being Romans. 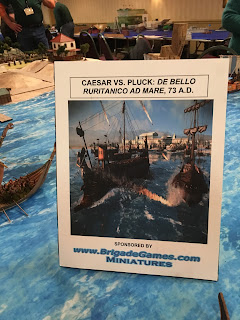 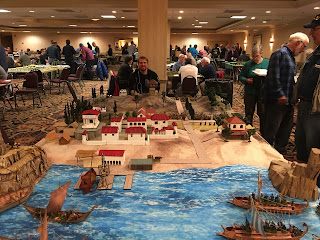 The scenario was this:  The Sarmatian Ruritanii have again crossed the Ister River and invaded the Roman province of Sylvania, capturing the Adriatic port of Colonia Turgidium.  Local Celto-Dacian tribesmen, the Shueti have risen in rebellion and rallied to the Ruritanii. Illyrian pirates together with some far-ranging Syrian corsairs have joined them as well. 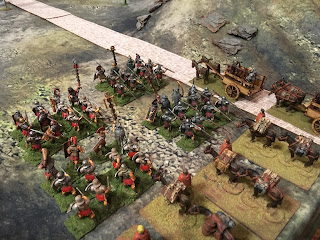 A Roman force is hastily organized under the command of Domitian, the emperor Vespasian's second and less talented son (played again by Walt O'Hara with suitably whiny arrogance).  He led a squadron of the Ravenna fleet with a landing force of Praetorians while a task force built around the VII Legion attacks from the landward side. 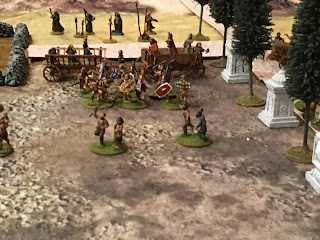 We had twelve players, all but one played Roman commanders.  The twelfth player ran Burebista and Burorola, twin sisters vying for the vacant throne of the Shueti. 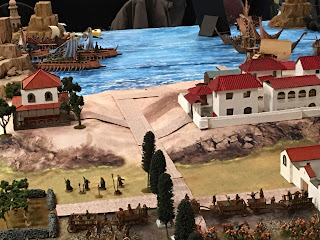 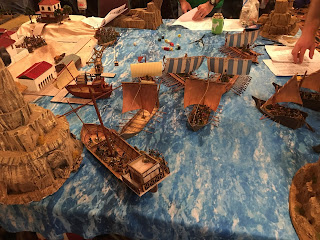 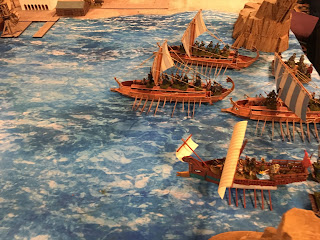 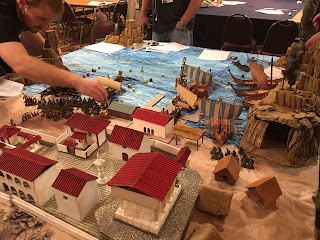 The naval side of the battle went well for the Romans, with the pirates ships dispatched handily.  However, one Roman trireme was destroyed by naphtha fire from a Syrian pirate.  Once the bay was cleared, the crews and Domitian's gladiator bodyguard landed to support the Praetorians.  The landing force fended off attacks from the Shueti and destroyed the barbarians in battle on the beach.  Princess Burebista committed suicide to avoid being captured by the triumphant Romans. 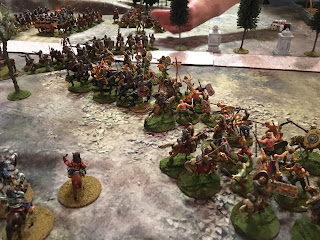 Things went more difficultly for the Romans on the landward side.  The auxiliaries stormed with some loss the captured watch tower that guarded the approaches to the port.  They then didn't move from the hill.  The Roman cavalry pushed rashly forward and were hit by both the naked fanatics of the Shueti and the heavy cataphracts of the Ruritanii, who had emerged from a forest to strike the Romans in the flank.  After a very hard fought battle the Roman cavalry was completely destroyed, having been left to their fate by the Roman legionaries whose commanders were not enthusiastic about risking their necks in such brawl.  Only a couple of cohorts of the Legion tried to help, under the leadership of young tribune (played with aristocratic cluelessness by Howard W. himself).  Despite the loss of the cavalry, the Roman line held, the Shueti completely destroyed, and the Ruritanii badly bloodied, causing them to retreat.  The Princess Bororolla was rescued at the romantically last minute by King Rheomitalces Rufus of the Ruritanii. The two rode off vowing vengeance against the Romans... 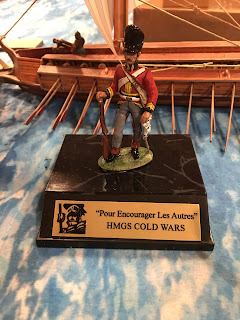 Everyone seemed to have a great time and the game was awarded a PELA for its time slot. 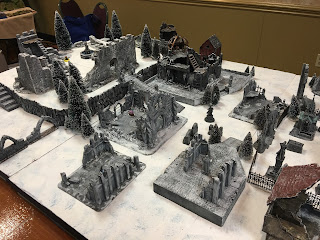 I also got to play in Jeff Allan's Frostgrave game.  A magnificent table! 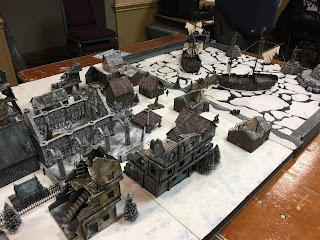 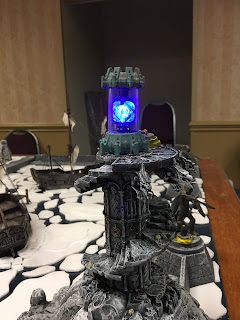 It was an eight player game with most of the players unfamiliar with the Frostgrave rules but things ran very smoothly and a good time was had by all.  We were divided into two teams, Good vs. Evil but each player had a unique warband.  I ran a good shaman (witch) in the center of the board and had a relatively easy time of capturing treasures and avoiding any casualties.  Many of the other players were not so lucky on casualties. 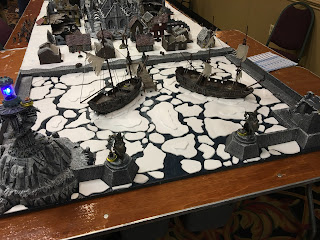 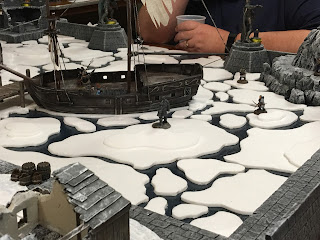 A lot of time and laughter was spent on a couple warbands pushing each other around on the ice flows in the harbor. 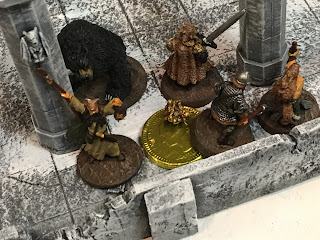 As it turned out, we all faced far more danger from the GM-run wandering monsters than from each other.  In the end, I even got some of the evil players to rally around my animal familiar, Greg the Bear to save him from a skeleton lord awoken in a crypt.  A very fun and memorable game. 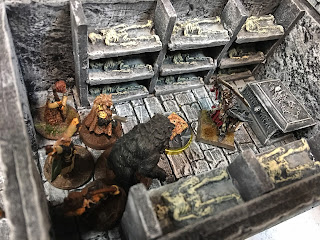 Here's some other games that caught my eye. 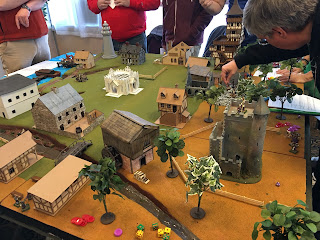 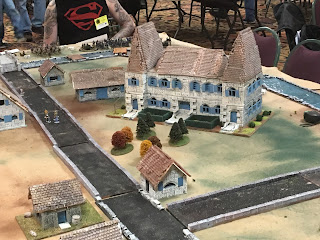 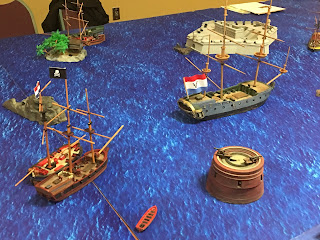 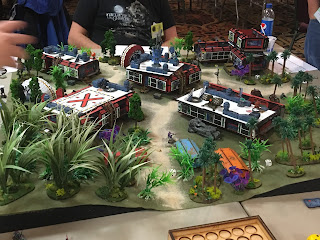 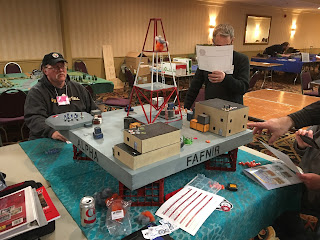 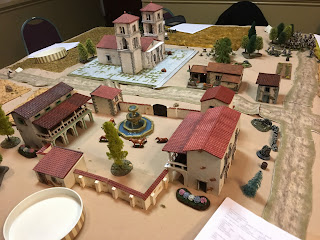 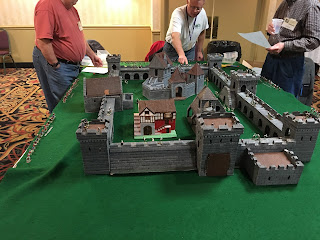