A belated AAR from Historicon 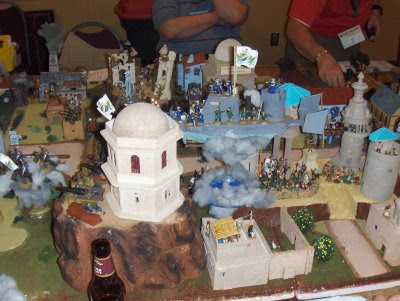 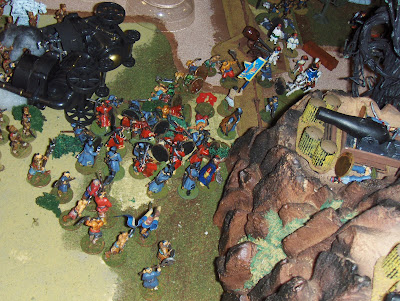 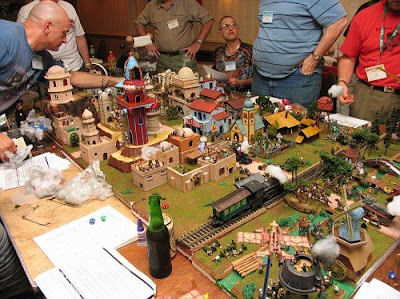 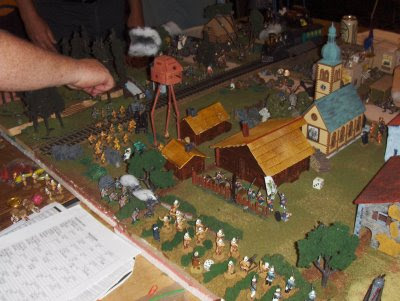 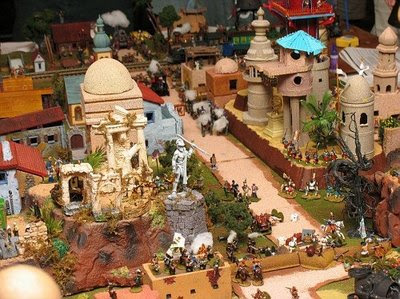 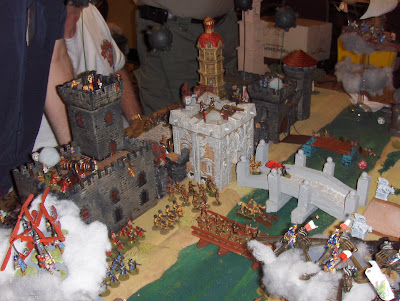 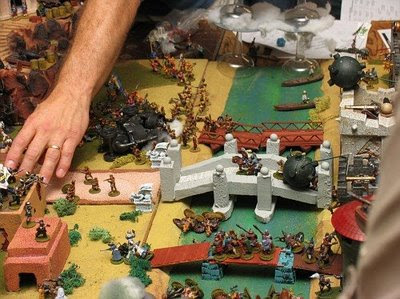 This is a very belated after action report on the Battles byGaslight game I ran at Historicon this year.

This was the description from the Historicon PEL:

Ruritania is at war! The Scythian Brothers have rebelled and the Kaiser's puppets, Graustark and Transbalkania have invaded, capturing the city of Apollograd. The Ruritanian army fights on under its brave but dim commander, Crown Prince Ruprikt. Aided by French allies, a traveling Wild West show, and an enthusiastic ornithologist, the city is now besieged. But a German relief army is on the march. Can Teutonic efficiency overcome French elan, American audacity, and Ruritanian denseness?

The basic premise was that Ruprikt's evil half-brother Rudolph fomented an anarchist uprising in the city of Apollograd with help from Germany and Ruritania's neighbors.

The board was set up with Apollograd at one with the rebels andGraustarkers trying to break out to link up with the German-Transbalkanian relief army that was coming in from the other side ofthe board. The Ruritanians along with American and French alliesheld the central part of the board which was a suburb from whichthey were besieging the city.

The relief army commanders adopted what they termed was a "WarsawUprising" strategy in that they launched only minor probing attacks,hoping that the Ruritanians and rebels would wipe each other out,leaving the pickings for the Kaiser. The rebels complied with this strategy by launching wave after wave of frontal attacks against themain Ruritanian lines and being slaughtered. The big factor in this fight was the Ruritanian aerial gunboat, the Queen Wendyleen, thatwas so unstoppable that the rebel players dubbed it "The DeathStar."

We ran out of time before the Relief Army could really test theirstrategy but the Ruritanians had plenty of reserves left and I thinkwould have been able to fend off most of the German attacks. In one case, a German unit advancing on one of the flanks was driven offthe board by a harangue from the Ladies' Temperance League leader. Additionally, the allied Transbalkanian forces had been cut up pretty badly by Khazar militia led by their devastatingly effective princess, Sylvia Khan.

Towards the end of the game, the rebels finally broke through the front line and actually had surrounded Ruprikt who was too stupid toretreat from the front lines. The Idiot Prince heroically held offall attacks single-handedly until he was rescued in a suitably dramatic manner by a charge lead by Teddy Roosevelt and the most heavily armed ornithological expedition in history.

As I said, the relief army did not become too heavily engaged butdid manage to stage a surprise at the very end of the game. Victory points were awarded by killing units or capturing locations on theboard. One of the big point winners was for capture of the BrfnishWorks, where the potent national alcoholic drink of Ruritania,brfnish, was brewed/distilled. On the last turn, the German player launched his underground mole drill into the works and the Mole Troops managed, after a very bloody melee to capture the Works, netting the relief force some pretty hefty points.

Therefore, the game counted as a marginal Ruritanian victory withthe rebellion in Apollograd crushed but Rudolph escaping to fight another day. However, the Kaiser would gain concessions at theeventual peace negotiations due to the capture of the Works, causing resentment in Ruritania for the future.

While most of the players seemed to have enjoyed the game, I think I made it too ambitious in scale. I had about 14 players participating which was hard to manage by myself, especially since most of the players had never played Gaslight before. Even with some of the more experienced players lending a hand, things went slower than I hoped and I think it dragged for several of the players. If I run this game at a convention again, I intend to scaleback on it or otherwise modify it.
Posted by bogdanwaz at 12:08 PM No comments: