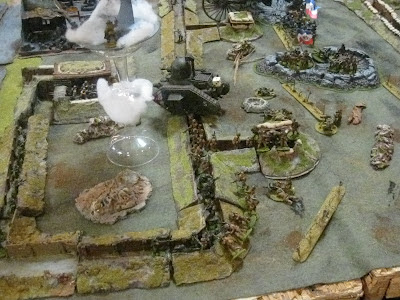 This is just a couple of notes on the games I got to play in at Cold Wars 2012. My son and I didn’t get there until early Friday evening but had a great time.

Friday night, we played in “The Lion Eats Tonight,” a big game hunting game using new rules by Howard Whitehouse. The game was hilarious (as Howard’s games usually are). There were 12 players with half playing the hunters and their gunbearers, etc. I played Colonel drunk-before-noon who proved to be absolutely clueless. I tried to bag a couple of hippos right off the bat, missed horribly, and stirred up every beastie in the watering hole. This resulted in my bearer, Wellington (who I insisted on calling Amanda) being lunched by a crocodile, the rest of my party fleeing, and me spending the rest of the game trying to say one step ahead of an angry and persistent hippo. 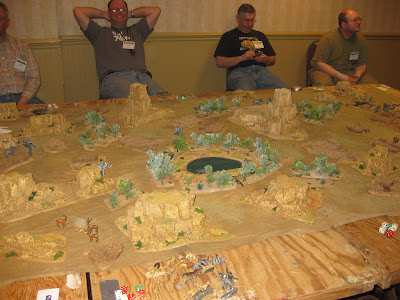 The table for The Lion Eats Tonight 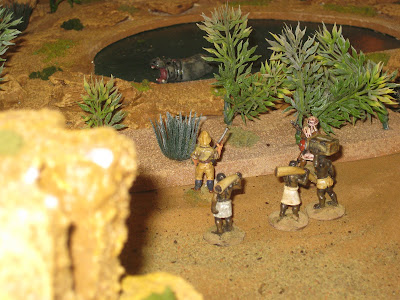 The Colonel approaches his target 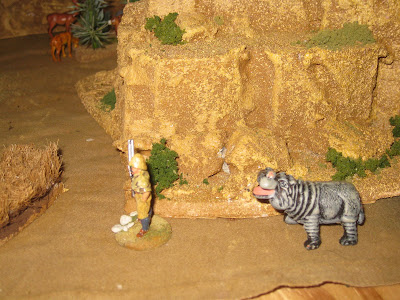 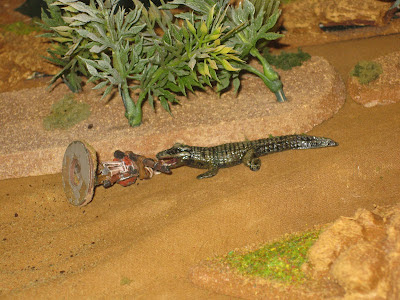 Elsewhere on the table, one of the actually competent hunters wiped out an extended family of lions only to be pushed off a cliff by Keith the ill-tempered rhino who was played by my son with incongruous ninja-like stealth. 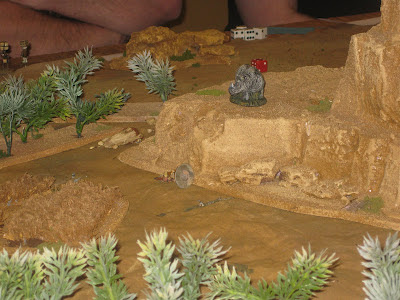 The best moment in the game occurred when the husband in an English aristocrat couple on holiday was slaughtered by his erstwhile prey. His game wife, when told of the tragedy replied, “I’m rich!”

Saturday I ran my Goodbye to Guns game. Excuse my bragging a bit but the game was actually awarded a “Legion of Honor” ribbon by the HMGS folks as well as getting a lot of positive comments about the look of the game from passersby. 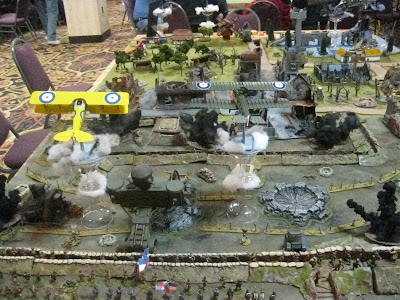 I had about 14 players so things were happening all over the board; I can only give some impressions. The whole concept of the game was to be a race by the various players to rescue the Princess Ludmilla who was held captive by the evil Dr. von Keuger. Of course, the hero of the story was Ernest Hummingbird, my drunker and more likeable pulp version of Hemmingway. One rival was American super-agent and flyer, G-8. We also had Blackadder and gang, the Ruritanians, Americans, and Italians. 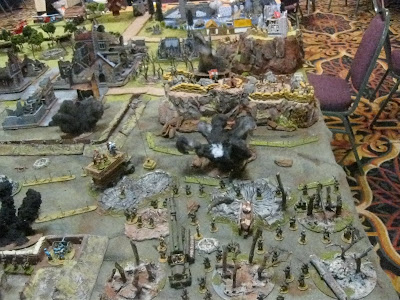 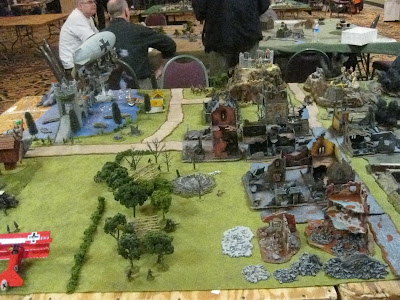 I also included a plucky young British Tommy trying to be reunited with the beloved animal he had raised from young. Sadly, this was not a magnificient war horse but rather Private Baldrick searching for his pet rat, Joey, who was being used as a lab rat in the lair of Dr. Keuger.

On the Central Powers side, in addition to Kreuger, were various stripes of Germans, some demoralized Austro-Hungarians, fierce Turks, a couple of Bulgarians, the Red Baron, and Mata Hari, who did more to slow the Allied Big Push with a couple of tassels than the entire Central Power force. 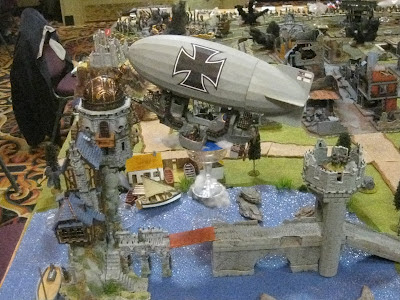 As is often the case, most of the players completely disregarded the motivations I had written up and just went blasting away at each other. This is absolutely fine, since chaos and a complete disregard for instructions is one of the thing I like to see in players. 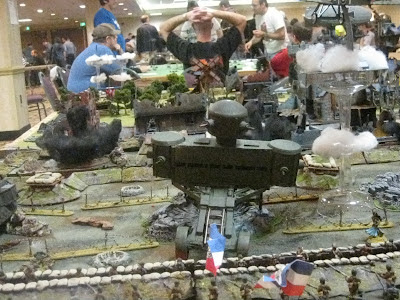 Ultimately, the Allies did achieve a breakthrough although the front line German and Austrian troops put up a pretty effective resistance for quite a while. The Americans had a dramatic assault on the main German trench line and the Italians actually managed to assault Mt. Zeppo with minimum casualties, except for about half of the Italian Army that ended up following Mata Hari like puppy dogs. 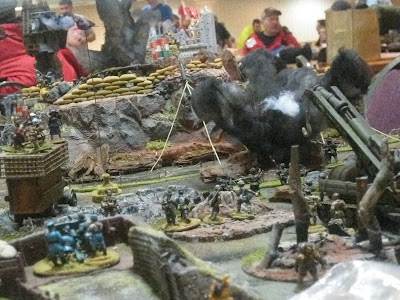 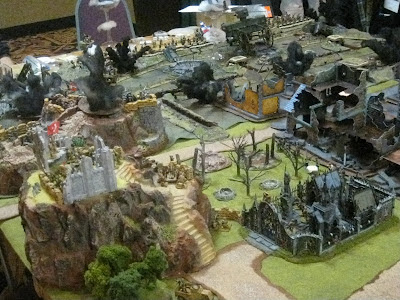 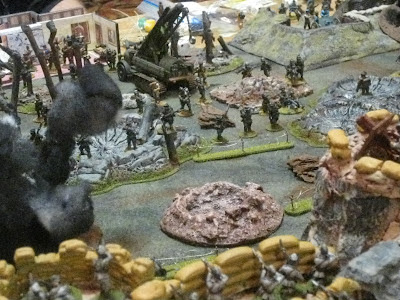 The Ruritanian army actually achieved the furthest breakthrough with the big Tsar tank not only surviving the bullet-magnet treatment by the entire Central Powers force but landing the embarked naval landing party to claim the credit for capturing the Austrian town of Glottelstaap. 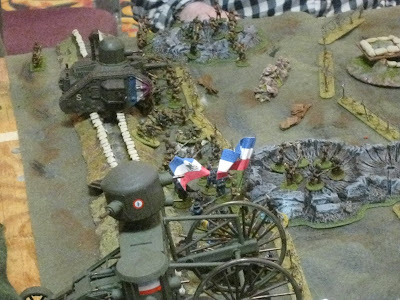 The Red Baron had a less than stellar day. One of G-8’s Battle Aces was attempting to attack the Baron’s aerodrome and was shot down. The pilot bailed out and landed directly on the Baron’s taxing Fokker. For the rest of the game, the two fought hand-to-hand. 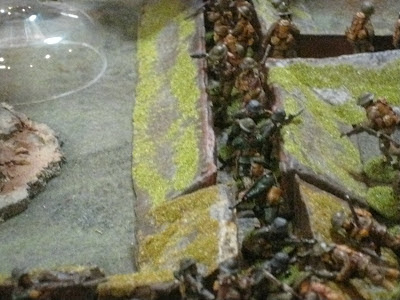 G-8 began behind enemy lines in disguise and so was able to free the Princess with the help of the far more competent Joey the War Rat, with the Germans none the wiser. In the meantime, Hummingbird who was driving the secret super weapon of the Allies, a truck carrying an elite corps of messenger pigeons, barreled through No Man’s Land, running down anybody that got in the way. He made it the shores of the lake where artillery fire from the big German tank destroyed the truck but Hummingbird, along with his side-kicks Gladys and Mrazek. The trio jumped into a convenient rowboat and headed towards the castle. G-8 and the Princess were at this point fleeing across the bridge to shore when Dr. Keuger recognized them and sent his giant bats to stop them. G-8 and the Princess dove into the water with the bats close behind. Hummingbird hurried the boat to their aid, but not before some Turkish soldiers shot down his side-kicks.

The game ended with a fierce hand-to-hand struggle between all of our heroes, including Baldrick who had managed to attract the attention of most of the German reserves but somehow managed to survive, and a host of rebellious lab rats lead by Joey. Ultimately, Hummingbird managed to rescue the Princess. Baldrick was reunited with Joey. Mata Hari, seeing how the war was shaping up, left for Paris with half of the Italian army going with her, intending to be her back-up dancers and orchestra. The Red Baron never did resolve the melee with the Battle Ace but did end up drifting over Allied lines, I ruled that ultimately the plane ran out of fuel and he was taken prisoner. A happy ending for everyone, except Dr. Kreuger who vowed revenge against the upstart Hummingbird.

I had a great bunch of players in the game who all got into the spirit of things and didn’t take things at all serious, even the Central Powers players, who like all pulp villains ultimately ended up losing.

At the table next us to was a very cool game in which pterodactyl mounted Luftwaffe were attacking some US bombers. Very cool looking game. 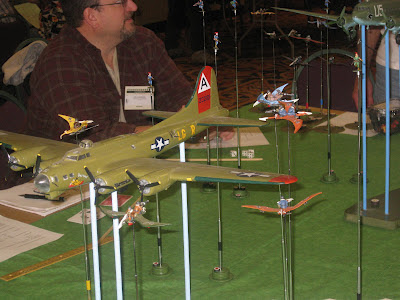 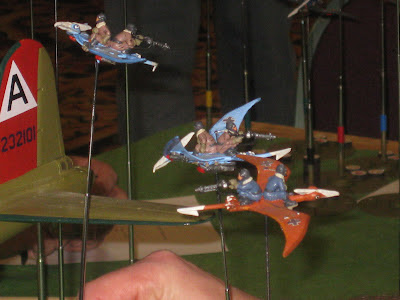 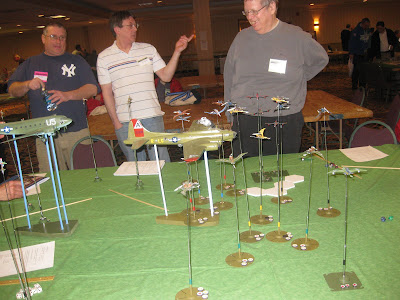 Saturday night, we joined a short demo game of Howard W’s new, as yet unpublished, sci-fi rules, Alien Suns. Nice, fast-playing set of rules. In the game, I played some special forces fighting local rebels. I think I rolled every bad roll I possibly could while my opponent kept rolling every good possible roll. Still a fun, easy way to end a long busy day.

I’m look forward to Historicon where I will probably run Goodbye to Guns again, possible along with another Hummingbird adventure, The Old Guy and the Big Fish.
Posted by bogdanwaz at 11:25 AM 1 comment: